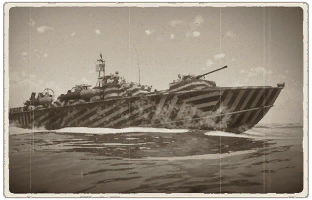 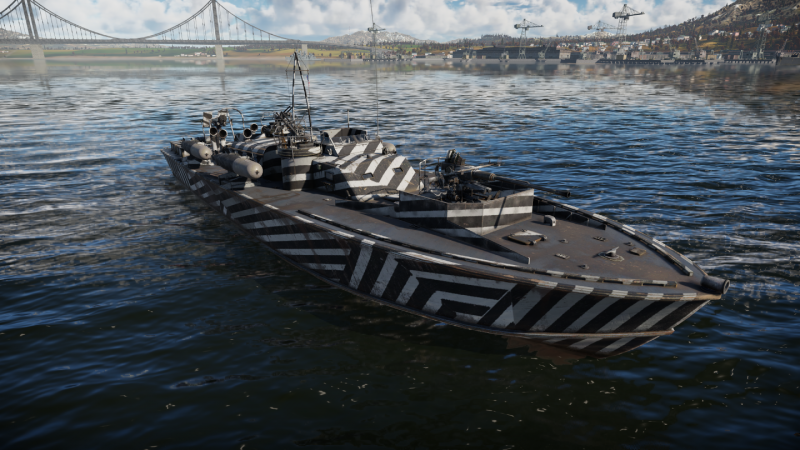 The Elco 80 ft PT-174 is a premium rank II American motor torpedo boat with a battle rating of 2.3 (AB/RB/SB). It was introduced in Update "Ground Breaking".

The PT-174 is one of the more distinctive member of the Elco PT boat family. Instead of focusing its firepower at a chasing enemy from the stern, the PT-174's main firepower, a powerful 40 mm Bofors autocannon, is placed at the bow instead. This allows the PT-174 to be played more aggressively than its counterparts. Although it does share the weak hull of the Elco family, the PT-174 has a great potential when its strengths and weaknesses are well understood, thus allowing it to tackle even the seemingly superior coastal boats at higher ranks.

Being one of the numerous 80 ft Elco PT boats, the PT-174's protection is rather poor. The 12.7 mm of the Oerlikon autocannon gun shield and the 6.35 mm of armour around the helmsman being the only protection this wooden-hull boat has to offer. The boat has a crew of 12 men, up to 9 of them can be lost before the boat starts to sink. Due to the boat having only three sections with three crews each, it is particularly vulnerable against shell with high penetration at the front and any autocannons at the sides.

As with the other Elco boats, the PT-174 offers great all-around mobility. The boat is easy to handle and has quick acceleration and deceleration. This allows the PT-174 to quickly move and reposition around the map, to find a good spot for taking on an enemy.

The PT-174 features the 40 mm Bofors L/60 Mark 3 autocannon placed at the bow of the boat. This peculiar placement is unusual compared to the other Elco boats, as they were usually placed at the stern, and this feature cannot be found until the rank V PT-810. Due to this, the PT-174 has a unique offensive capability compared to its brethren. Unlike the other Elco boats that were forced to show its broadsides to utilize their Bofors, the PT-174 is capable of going "bow-in" against the enemy, and offers easy gun handling while reducing the boat's vulnerability to enemy fire in the process.

The Bofors utilize two shells; an AP-T round with high penetration of 58 mm at 1,000 m and 41 mm at 2,000 m, and an HEFI-T shell with a large explosive filler. Due to the boat's fragile hull, the AP-T belt is preferred due to its effectiveness at long range engagements (up to 2.5 km), although an "Universal" belt with a balance mix of AP-T and HEFI-T can also be considered for engaging aircraft.

While having a frontally-mounted Bofors has many benefits, it's not without downsides. The gun lacks any shield to protect it and its gunner from any enemy fire, exposing it to any incoming shot and made it rather easy to get disabled and leaving the boat vulnerable. The PT-174 is also a rather unstable gun platform at high speed, which significantly hampers the gun handling, especially in rough sea conditions. This can be partially remedied by slowing the boat down to around 60-70 km/h.

The PT-174 features a single 20 mm Oerlikon Mk.II autocannon at the stern as a secondary armament. While not as impressive as the Bofors at the bow, the Oerlikon offers good damage output within the 2 km range. Due to the vulnerable broadsides of the boat, however, the Oerlikon is best reserved for countering flankers and inbound aircraft.

As with the other 80 ft Elco boats, the PT-174 features two pairs of 12.7 mm AN-M2 Browning machine guns in offset baskets. These guns offers reasonable supplementary firepower against both surface and air targets alike. In case the Bofors autocannon is disabled, these machine guns are a failsafe weapon to retaliate against the enemy while repairing your main gun.

The PT-174 carries four standard-issued Mk.13 torpedoes. The torpedoes were positioned almost directly forward and thus is easy to aim. While each individual torpedo is fairly slow with a top speed of 50 km/h and has a small warhead of 173 kg TNT equivalent. They can be useful as an ambush weapon against a slower and larger ship, especially in a saturation barrage.

The PT-174 can be best described as a glass cannon, as its powerful and easy-to-use 40 mm Bofors autocannon is balanced by its poor protection. Unlike the other Elco boats which primarily excels at hit-and-run, however, the PT-174 has more utility than its counterparts owing to the frontal-heavy firepower, thus allowing the ship to tackle almost any enemy if its capabilities are utilized to its fullest.

Due to a rather mediocre broadsides firepower, exposing the vulnerable sides of the boat to use both the Bofors and Oerlikons are not recommended. Instead, try to minimize your side profile as much as possible and going "bow-in" while engaging. The boat can easily dispatch most boats in 1-on-1 engagements, though it can be easily overwhelmed by a group of enemies. Situation awareness is a key to know when to engage and when to retreat to avoid overextending.

While it is tempting to chase the enemy across the open water, sometimes it is better to stick behind some cover and strike at the right moment. The PT-174 offers such an opportunity, as the boat's great handling characteristic allows you to travel around and precisely stop at the right spot behind some cover. Here is where the frontally-mounted Bofors comes into play, as the boat's positioning can be adjusted more easily than for the rear-mounted counterparts. You can either wait for some unwitting enemy to venture within your firing range or come out at the right moment when your allies make a push to provide a surprise fire support. Against larger or slower vessels, the four torpedoes will come in handy to bring them down.

Due to the Bofors' range and accuracy, the PT-174 is also capable in a fire support role. At 2.5 km effective range, the Bofors outranges most of the PT boats within its BR range, and is capable of dealing significant damage against boats at higher BRs. You can either sit behind some low cover at range, within a pack of friendly boats or the line of sight of a certain choke point, then reposition when a looming threat i.e. certain sub-chasers or frigates with high-calibre guns appear or an incoming artillery barrage is inbound. 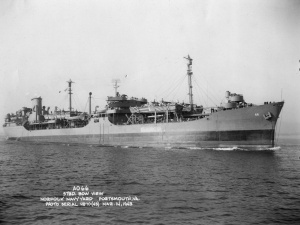