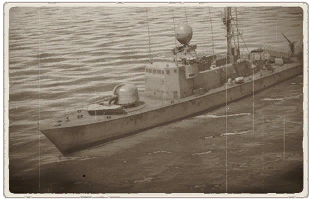 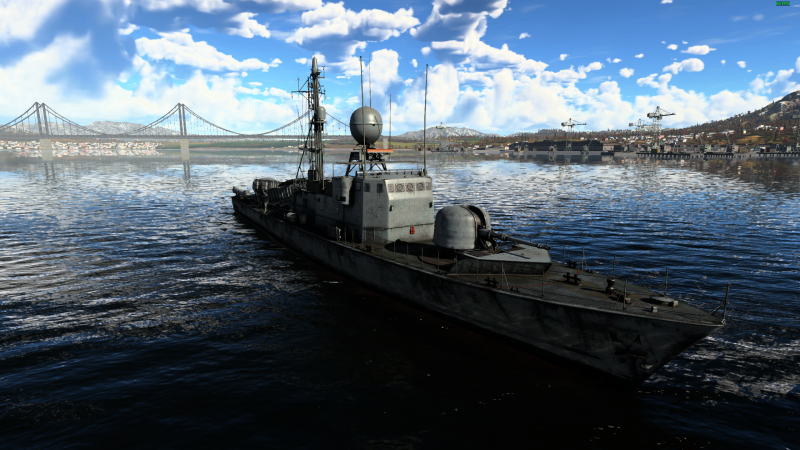 The Albatros-class, Bussard (143) is a gift rank V German motor torpedo gun boat with a battle rating of 3.7 (AB/RB/SB). It was introduced during Update "Red Skies" as a reward for the 2021 Summer Landing event.

The survivability of the Bussard is abysmal. Even with its crew count higher than PT boats', the vessel is completely unprotected by any kind of armour and any gunfire will make short work of her crew and internal compartments. The crew is large at 40 sailors, but they are quickly taken out by gunfire.

The turrets and ammunition magazine are relatively compact, so ammo detonations are possible but not extremely common. The secondary armament, four machine guns above the bridge, is very small and hard to hit. The bridge and the engine compartment are very large targets and are often the first things destroyed when taking fire.

The ship is powered by four MTU 16V 956 TB91 diesels, each producing 17,700 shaft horsepower. This gives the Bussard a very good speed for its size, and provides quick manoeuvring at any speed. The vessel can reach a forward speed of slightly over 41 knots spaded, and has a very respectable 22 knot reverse speed. The ship isn't as good as other coastal craft at stopping from full speed, but it is enough to avoid constantly crashing into islands on heavily clustered maps. The rudder shifting is very responsive, taking around five seconds to go completely from one side to the other.

The two fast-firing 76 mm/62 OTO-Melara Compact (76 mm) guns are hard-hitting and have access to some excellent ammunition: a very effective HE shell and a HE-VT shell that easily shreds incoming aircraft.

The reload time of the weapons is fixed at 0.9 seconds with the installed autoloader, with a ready-use ammo supply of 85 rounds per gun. The ballistics are excellent at close to medium range, but at long range begins to suffer given the small calibre of the weapons.

Against enemy ships, the HE shell is the obvious choice. A very potent explosive mass will shred other coastal vessels and can start fires on larger ships.

Against enemy aircraft and to a lesser extent small vessels, the HE-VT shells are very effective. Enemy aircraft nearby will not last long against the quick-firing proximity shells, and smaller vessels are susceptible to them as they act like normal HE against surface targets.

The secondary armament is very lacklustre, but is still capable of doing some damage. Two AN-M2 (12.7 mm) heavy machine guns and two MG3 (7.62 mm) light machine guns, one of each on the port and starboard sides of the bridge, provide limited defence against other coastal craft and nearby aircraft.

The .50 cal weapons come stock with a Universal belt, and you can unlock an AP and API-T belt with higher portions of Incendiary and Armour-Piercing rounds.

The Bussard also has access to two 533 mm Seal DM2A1 torpedoes on the rear deck. The torpedoes launch backwards and quickly turn around before continuing on their course. The weapons have a very long range and good speed, and while the warhead is mediocre at 250 kg of explosive mass, it is still effective against light craft and destroyers.

The Bussard is best used as a second-line ship, supporting faster or more manoeuvrable vessels with its powerful main armament. She relies on nearby allies since her hull is very weak and at the same time represents a large target. It can also be an effective anti-aircraft escort for friendly vessels with its fast-firing proximity rounds, air search radar, and air target tracking radar that can lock onto enemy aircraft and provide a lead indicator.

Everything in the game is a major threat to this ship, given its large size and easily damaged internal modules. Vessels such as the American PT boats with their large-calibre 20 mm and 40 mm cannons are top priority, with any coastal craft or destroyer it can face being a danger.

In 1972, the AEG-Telefunken company received an order for the construction of 10 boats in the Albatros project (Type 143), developed by the shipbuilding company Lürssen. These boats were supposed to replace the outdated ships of Projects 141 and 142. The main calibre of the boats were the Italian automatic 76 mm cannons manufactured by OTO Melara, in addition, there were two SEAL DM2A1 torpedoes on board. The last boat of the series was built in 1977, the lead ship, Albatros, like the rest of the boats, received "bird" names. The fourth boat of the series, Bussard (German for "buzzard") was in service with the German fleet until 2005, and in 2010 was sold to Ghana, where she was renamed to Yaa Asantewaa, in honour of the leader of the uprising and the nation’s heroine.

Other boats of similar configuration and role