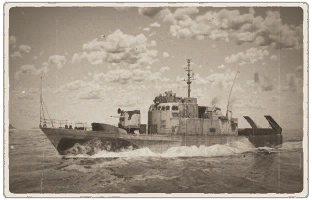 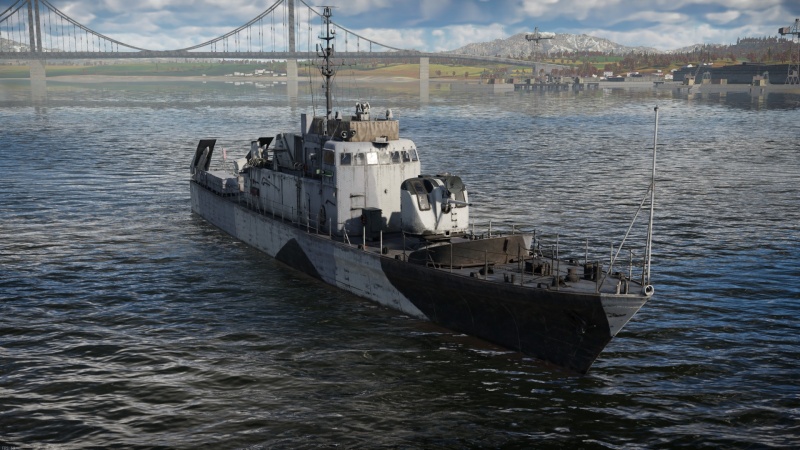 The Asheville-class, USS Douglas (PGM-100) is a premium rank IV American motor gun boat with a battle rating of 4.0 (AB/RB/SB). It was introduced in Update "Danger Zone". It has access to guided missiles and a dedicated surface-to-air missile.

The PGM-100 suffers from a severe lack of armour, being vulnerable even to small arms fire. As a light coastal vessel, it does not have access to anti-fragmentation armour, with an armour thickness barely surpassing 8 mm. This lack of armour is compensated with an impressive mobility. Due to the superstructure being very tall, it is a primary target for enemy fire, making it easy for all sorts of calibre to heavily damage the Douglas, being able to significantly damage the bridge and leave the ship command-less until it is repaired. The best armour for the Douglas is to remain unseen and hidden, primarily close to rocky locations or against any environmental cover that is big enough to cover the Douglas. A recommendation is to play close or inside cap points, as the RIM-24A Tartar has to be reloaded after both missiles are spent. Staying inside cap points is a high-risk/high-reward tactic. You are able to have a reduced repair time as well as be able to reload all your weapons, but depending on the map, you are a primary target for enemies, especially aircraft. The lack of cover in some maps for specific cap points leaves much to desire. However, as the Douglas is a coastal vessel, it has quick and easy access to at least one cap point inside a better covered area.

The Douglas is a pretty agile vessel, featuring a CODOG (Combined Diesel Or Gas) propulsion, making it able to reach high speeds in a quick manner. It has a pretty responsive rudder, even at low speeds. However, sometimes the rudder tends to "stick" when going backwards, making it relatively hard to keep a constant heading while going in reverse. While it is not faster than many of the rest of coastal vessels seen in-game, it certainly has a high endurance and speed for a vessel its size.

Like the USS Asheville, the Douglas has access to a 76 mm Mk.34 3-inch autocannon. While it remains uncomparable to better weapon systems like the 76 mm/62 OTO-Melara Compact or the 76 mm/60 AK-176M, it is still a very capable weapon against a wide variety of targets. As it is obvious, the Mk.34 is not meant to be used against heavily-armoured vessels such as destroyers and cruisers. It has very good capabilities to fight off light- to medium-armoured targets, as well as engage all sorts of airborne threats from an effective range of close to 3 km. The rate of fire of the Mk.34 leaves much to expect, but is still a very potent gun. It has 200 ready-rack ammo which can be surprisingly burnt in a fast manner. Targeting speeds are average, crew upgrades are able to significantly increase the traverse of the weapon as well as the elevation.

The USS Douglas has access to two twin AN-M2 12.7 mm heavy machine guns. They are useful against lightly-armoured vessels and low flying aircraft, but have little use outside those two target groups.

The USS Douglas has access to the RIM-24A Tartar surface-to-air missile, a beam-riding guided missile. It is the first dedicated ship-launched SAM seen in-game. It has a warhead equivalent to ~50 kg of TNT explosive mass. It is a very powerful missile, capable of destroying any airborne threat with ease and able to destroy even surface combatants. With a speed of 620 m/s and a range of 14 km, it is a fast surface-launched missile with such range, being followed behind by the VT-1 SAM with 1,250 m/s and 12 km range; and Nettuno AShM with 280 m/s and 10 km range. This missile is useful to engage all sorts of airborne threats at stand-off distance, being particularily useful in Naval Enduring Confrontation battles, where fighting enemy aircraft is seen most of the time. The lack of a dedicated search radar makes anti-air duties harder as detection is solely based upon visual contact, but the use of the tracking radar can significantly help with the guidance. As the Tartar is beam-rider (mouse controlled), it can be slaved to the radar track and 'target selection' feature with keybinds, making it very simple to engage all sorts of targets: from small and manoeuvrable to big and sluggish. Despite having a relatively small G-Force limit, since it will be launched at range, the corrections needed to reach a manoeuvring target are minuscule. However, if the target manoeuvres at close range from the missile, it might be hard to successfully hit the target. Since for the targets faced at its battle rating, the awareness and expectations to fight a SAM system is null, this will make it substantially easier to hit targets.

The Tartar can also be used as an anti-ship missile (AShM) if required. The huge explosive mass is more than enough to ammo rack almost any surface vessel, but battleships and specific cruisers. It should be aimed at the waterline, close to a known ammo rack. Most of the time, it is easier to engage the stern ammo racks, as sometimes they are slightly more elevated than bow ones. This is applicable to all US, German and Soviet destroyers, with occasional cases for British and Italians.

The Douglas is able to fight off coastal vessels at range thanks to the Mk.34 and the RIM-24A, but it is unable to defend itself at close ranges as it lacks the 40 mm turret the USS Asheville has. However, it is more than capable of keeping up a fight even with the strongest of enemies.

When in normal battles:

The USS Douglas is a support vessel most of the time with slight frontline capabilities. However, it shines as a full support vessel for both medium and long ranges. The good firepower and access to the incredible RIM-24A combined with the good mobility makes it a very good flanker and support vessel. At all costs close combat should be avoided as all coastal vessels are able to chew through the Douglas with ease due to the increased rate of fire of their armament, something not seen as much with its counterpart USS Asheville as it has the 40 mm turret. The Tartar has the possibility of killing surface vessels under a minimum range of ~2-2.5 km, depending on the terrain.

When in Enduring Confrontation battles:

This is where the use of RIM-24A tends to shine much more than in normal battles, mostly because of the variety of targets, tasks and long ranges. The Douglas is very capable of taking out a maximum of two convoy vessels with the Tartar, with possibilities of heavily damaging the enemy carrier if well-placed hits are made. The lack of surface search radar makes it harder to spot and designate enemy aerial targets, but thanks to the tracking radar, once a target is spotted it can be engaged right away. It is particularily useful against long range and high altitude bombers when they are on a run to engage a friendly carrier. These include but are not restricted to: Pe-8, He-117, Yer-2, B-17, He-111, PB4Y-2, etc. The Tartar is also able to be used as a missile defense system. It is able to engage other missiles and dropped ordnance in a similar manner to the AK-630, but at longer ranges with higher efficiency.