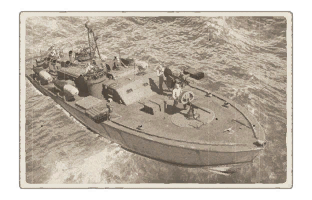 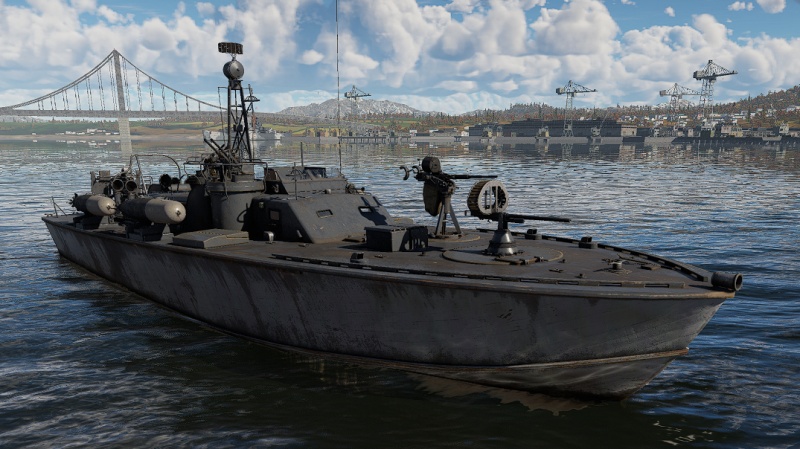 The Elco 80 ft PT-565 is a rank III American motor torpedo boat with a battle rating of 3.0 (AB/RB/SB). It was introduced in Update 1.79 "Project X" as part of the fleet closed beta test.

The PT-565 gets access to a single 40 mm Bofors guns at the stern of the vessel. This weapon is extremely potent against aircraft due to its accuracy and punching power. Though this weapon fires slower than the 20 mm Oerlikon or 12.7 mm AN/M2, it more than makes up for it due to its hard-hitting 40 mm shells. The 40 mm Bofors is capable of shredding aircraft and small boats from ranges of 2.5 km away, though effectiveness will drop off after that range due to the large bullet drop. The gun fires from 4-round clips that reload continuously, meaning that the weapon is capable of continuous fire. However, note that it will eventually overheat and jam after firing for too long.

Alongside the 40 mm cannon, the PT-565 gets access to a single 37 mm AN-M4 cannon located on the bow. This weapon is an interesting autocannon and fires much slower than the Bofors at the rear. It's also magazine-fed, meaning that it will have to reload after every thirty shots. Despite this, the weapon has great damage-dealing capacity and can be used in conjunction with the 40 mm Bofors cannon to deal with naval targets.

The PT-565 gets access to a single 20 mm Oerlikon cannon. The 20 mm Oerlikon cannon was the standard light anti-aircraft gun for several nations, including the United States, and replaced the prior AN/M2 Browning machine gun. This weapon is an effective short-range AA gun, and has adequate firing angles due to its awkward position between the AN-M4 and the bridge. The weapon has access to three belts: Default, AP and HE. Of these, the HE belt is by far the most effective against boats and aircraft due to its high explosive mass. As well, the guns fire from a drum magazine that will need to be reloaded. Because of the magazine design, the gun will not jam with continuous fire.

The PT-565 has access to two dual AN/M2 machine guns for anti-aircraft defence. The AN/M2 is a navalized anti-aircraft version of the popular Browning machine gun. This gun is rather ineffective at dealing significant damage to enemy aircraft, and is only effective within a ~1.5 to 2 km range at most. Also, keep in mind that these guns have a long 12-second reload after the gun’s magazine has been used. Due to the magazine configuration, the gun will not jam with continuous firing.

The PT-565 gets access to four 569 mm Mk.13 torpedoes for use against larger targets. The Mk.13 torpedoes are generally quite weak, but nevertheless, they can get the job done. The torpedoes have a small explosive mass of 178 kg, which means that it may take more than one torpedo to sink any early destroyers the PT-565 faces at its BR. The torpedoes are also quite slow and easy-to-dodge, having a top speed of 56 km/h. As a result, these torpedoes are best used as a close-in weapon against destroyers and cruisers, fired from a range of ~1 to 2 km where they are hard to dodge regardless of the enemy's speed.

PT-565 was an Elco 80-foot class Motor Torpedo Boat of the United States Navy. It was laid down by the Electric Launch Company (Elco) in Bayonne, NJ, on 28 April 1944. She was launched on 20 September 1944 and completed and commissioned on 8 December 1944.

PT-565 was first assigned to Motor Torpedo Boat Squadron Thirty-Eight (MTBRon 38), under the command of LCDR Charles A. Mills, Jr., USNR. BTBRon 38 was sent to the Southwest Pacific, arriving at Samar in the Philippines in May through June of 1945. The squadron was based out of Basilan Island, Philippines. The squadron saw little combat, except for August 1945 when the squadron's boats strafed ground targets on Borneo.

PT-565 was placed out of service on 24 October 1945. She was then transferred to the State Department, Foreign Liquidation Commission in May 1946 and sold. Her fate after the sale is unknown.