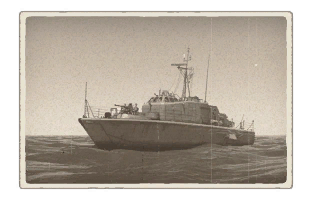 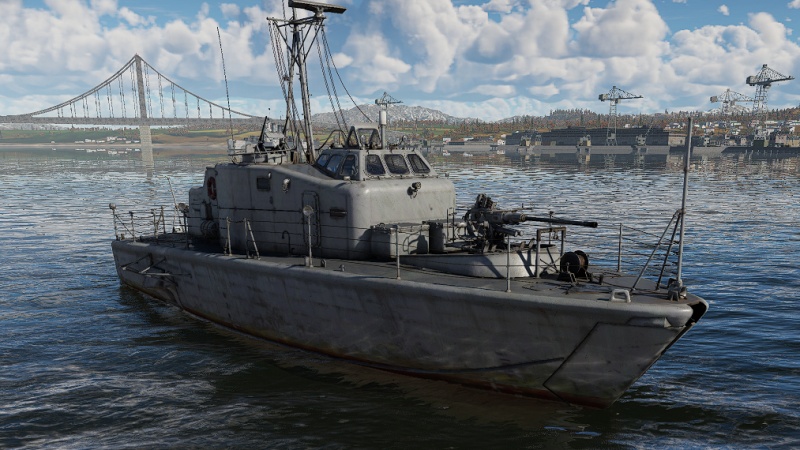 The Patrol Gunboat Hydrofoil Tucumcari (PGH-2) was built for operation by the Navy at a cost of $4 million by Boeing with subcontractor. She was unique at time by using water-jet propulsion instead of a propeller in water, the water intake being at the base of rear foils, pushed though a jet turbine engine powered pump, and exiting under the hull. When in shallow water or coming to port, the three hydrofoils would fold up and a small engine powered propeller with be used for manoeuvring. She was the basis for the Sparviero-class and PG 02 hydrofoil patrol boats.

The PGH-2 lacks armour, and the ammunition for the 40 mm Bofors gun is exposed, not to mention that they aren't armoured, so they can be hit easily.

The gunners are all exposed, so be careful not to let them get hit. She is also a small boat and small crew, and at full speed is well above the water making for a larger target.

PGH-2 is a hydrofoil, naturally she is quite fast, but far from the fastest in game. She has a good turn radius but in doing so loses speed very fast. Fortunately, acceleration is excellent and stopping is acceptable, though doing S turns will rapidly slow you down. The biggest downside is shallow water obstacles, at slow speed she will frequently hit land, or sunken ships.

The 40 mm Bofors is your main armament and a powerful one at that. The single Bofors cannons is in the bow with approximately 300 degrees of arc on horizontal plane. The cannons become almost ineffective at ranges above 2 km (1.25 mi). Continuous firing will diminish the precision of rounds, and could cause the cannon to overheat, needing a long cooldown.

The AN- M2 machine guns can fire until they run out of ammo, overall these are mostly used against smaller boats and planes, mostly ineffective at ranges above 1 km (0.62 mi).

The Tucumcari is the fastest boat in the USN, so she is good for one thing, capping distant points. While powerful, the 40 mm bofors is not enough to take down destroyers, but be bigger target for them. She will need to take special tactics to do well, but can be a match winning units, so keep handy. Your biggest threat is other rapid fire boats, less from slow firing ships over 4,000 m.

The USN's success with the Tucumcari was noticed by the Italians, and used the hydrofoil layout of the former as the bases for their new Sparviero-class patrol boat. Although they look similar at a glance, it is mainly limited to just the hydrofoils and water jet propulsion, the rest of the hull was unique design. The Japanese in turn were interested and purchased 3 of the Sparviero's but changed the armaments, in game as the PG 02.