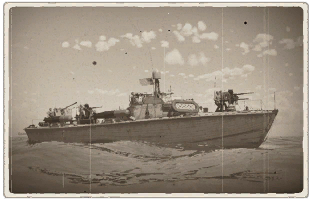 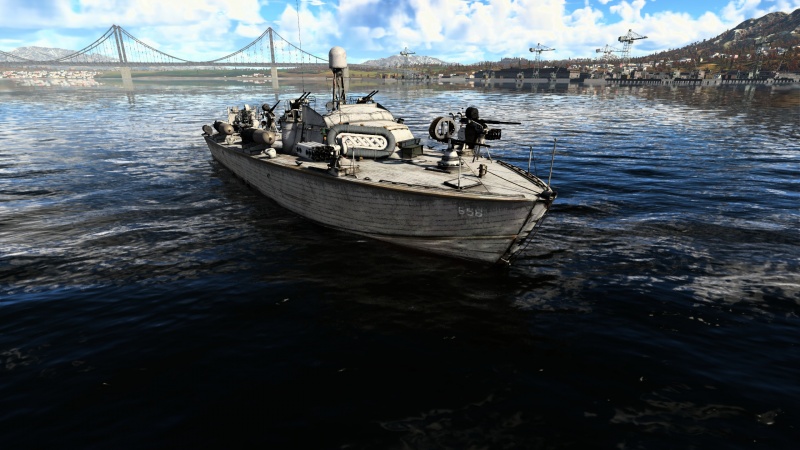 The Higgins 78 ft PT-658 is a premium gift rank III American motor torpedo boat with a battle rating of 2.7 (AB/RB/SB). It was introduced during Update "Direct Hit" as a reward for Battle Pass: Season V, "River Hunter".

The survivability of the PT-658 is the same as most other small coastal vessels: if you get hit, it's going to hurt. The wooden construction and lack of dedicated armour on the boat makes for a short lifespan while under fire if not approached carefully. The best way to maximize your odds is hide behind islands, outcroppings, or other form of cover until an unaware victim has passed. Captains should also remember that large calibre shells may destroy the vessel outright with a single direct hit, making even the weakest destroyer a valid threat.

Ammunition on the PT-658 is stored in two locations; one cache below the forward 37 mm cannon and the other below the 40 mm cannon. This often means that when an opponent is aiming to knock out your two main armaments they may detonate your ammo.

PT boats in general have excellent mobility, and the PT-658 is no exception to this rule. It combines superb acceleration, excellent manoeuvrability in tight spaces, and an above average top speed to make for an excellent early game capture point taker.

The primary armament of the PT-658 consists of two main cannons of differing calibres. The first is a forward-mounted 37 mm AN-M4 and the second is a rear-mounted 40 mm Bofors L/60 Mark 3. These two weapons can knock out most coastal vessels with a few sustained volleys and can easily cripple aircraft with a single hit or two hits. Keeping this is mind allows for aggressive attacks with overwhelming firepower.