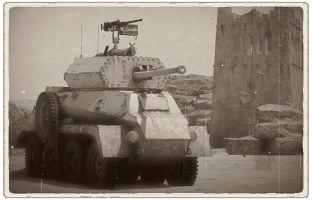 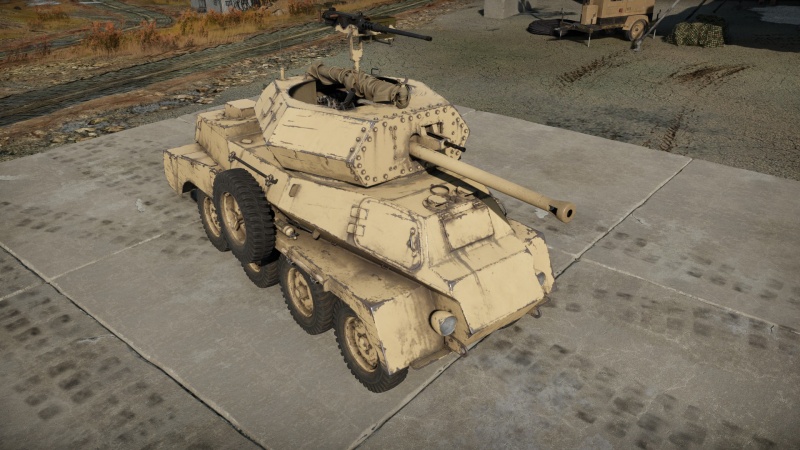 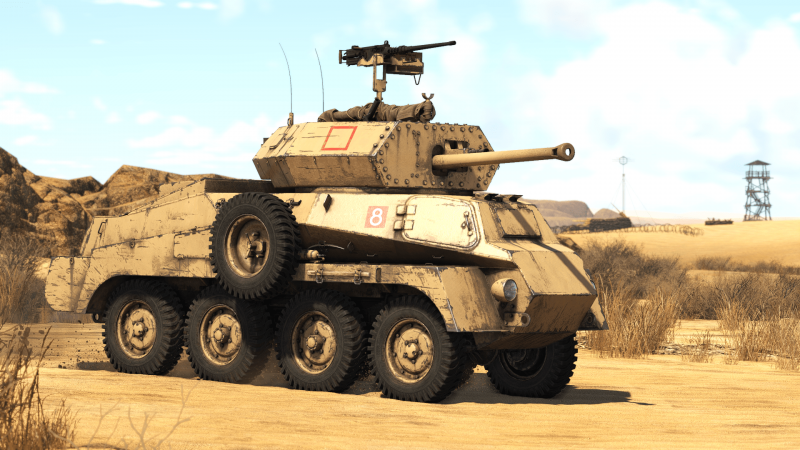 While it can survive some MG fire from the front, HMGs will penetrate the sides even from a distance, quickly destroying the SARC. Autocannons are even more dangerous as they will shred through the armour regardless of the distance or angle. Armour-piercing shots fired by tanks will sometimes just pass through the vehicle's armour without detonating but knocking out a crew member or more. The SARC is not a vehicle that should be exposed to enemy fire while expecting it to resist or shrug it.

The SARC has a good power to weight ratio of 17 hp/ton, allowing it to reach a respectable top speed of over 60 km/h fairly quickly on roads. Off road performance, however, is lacking as the vehicle is wheeled, light and without a powerful engine. It will struggle progressing through mud, snow, sand or when going uphill. Furthermore, its light weight means the vehicle can be even stopped by minor obstacles (walls, trees, fences, etc.) that medium Tanks would just run through with next to no loss of speed. Thanks to its good acceleration, any lost speed can be regained fairly quickly. Wheels don't turn on the spot, so manoeuvring in confined spaces can be difficult and time consuming.

The SARC MkVI (6pdr) is equipped with the 6-pounder gun, a common feature of British tanks at this rank. The gun has a very fast reload (provided the 10-round ready rack is not depleted) and has relatively good penetration at this battle rating. However, as is typical with most British vehicles, it only fires solid shot ammunition with no explosive filler. Due to the relatively small calibre, the spalling of the solid shot upon penetration is not particularly extensive, and it will often require multiple penetrations at different parts of the target in order to guarantee the destruction of the enemy vehicle. 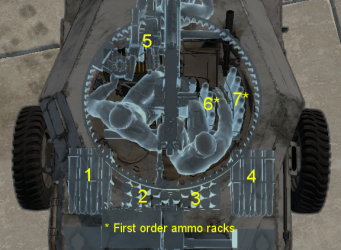 The SARC MkVI (6pdr) is one of the few British ground vehicles (other than Lend-Lease vehicles such as the Sherman II) to be armed with a pintle-mounted .50 cal Browning heavy machine gun. This machine gun gives considerable added firepower to the SARC MkVI (6pdr). It provides some measure of defence against aircraft and is also effective against lightly armoured targets such as most contemporary SPAA, against which the poor HE round of the 6-pdr main gun might struggle or the solid shot will do little to no damage without hitting the ammunition.

In battle, the SARC MkVI (6pdr) should be used similar to the Puma armoured cars, focus on using its speed for quick flanking attacks and scouting targets. Be wary on the terrain the SARC MkVI (6pdr) travels in as the vehicle is quite top heavy. In a scenario where you cannot flank, try to do quick strikes at the enemy. Avoid sniping and frontline combat as, like the Pumas, it has little armour and cannot take cannon fire.

The Marmon-Herrington Mk V (a.k.a. South African Reconnaissance Car/SARC Mk V) was an eight wheeled armored car prototype produced by the Marmon-Herrington Corporation for South Africa. It was much too heavy at 16 tonnes so a project for a lighter armored car was created, designated as the Mk VI. Questions were raised as to the armament of the vehicle so two prototypes were developed with different turrets mounting the 2pdr and 6pdr guns respectively.[1]

The Mk VI featured a new 8x8 chassis with independent suspension and steering for the front and rear axles. The hull was taller than the Mk V but was much lighter at 11,185 kilograms - over five tonnes less than the Mk V. The rear engine compartment was fitted with two Ford V8 95 horsepower engines (190 horsepower total) and a four forward, one reverse gear transmission. This allowed the Mk VI to attain a speed of 65 kilometers per hour and a range of 400 kilometers on road. Though fitted with different turrets, both prototypes had a radio station in the turret bustle.

The second prototype mounted the 57 mm Ordnance QF 6-pounder gun in an open-topped turret. The 6-pounder turret was crewed by two men - gunner and commander/loader - which made a total of three crew members in the vehicle. Two machine guns were provided: a coaxial 7.92 mm Besa machine gun and a pintle-mounted 12.7 mm (.50 cal) M2 machine gun.[1][2]

In 1938, South African engineers began development of a domestic armoured car design. Following the outbreak of WWII, the development of the vehicle was accelerated and a design around a 3 ton Ford truck chassis was created. However, as the South African industry wasn't developed enough to manufacture all components domestically, many had to be imported from other countries, such as the US, Canada and the UK with final assembly then taking place locally.

The SARC entered service with South African forces in 1940 and gradually found its way into the ranks of many of the allied nations' units, especially those of the Commonwealth, over the next few years. The vehicle quickly gained a reputation among its crews for its simplicity and reliability, despite it being considered rather light and undergunned.

At the height of WWII, in 1942 - 1943, the engineers behind the SARC sought to improve the vehicle's capabilities in an effort to match the German Sd.Kfz. 234. To that extent, the engineers developed the heavier, 8-wheeled experimental Mark V variant, followed by the improved Mark VI prototypes.

Only two prototypes of the SARC Mk.VI were built, one being armed by a 2 pdr and the other with a 6 pdr gun. While the former was sent to the UK for testing, the latter remained in South Africa. Despite favorable test results, the increased availability of more suitable American armoured cars in the later stages of the war made the Mark VI somewhat redundant and further development was cancelled.