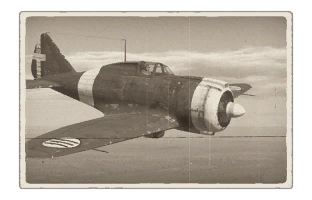 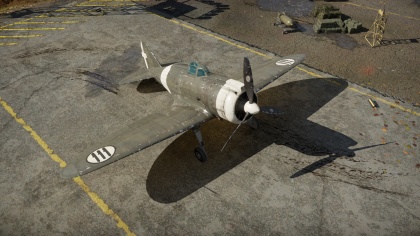 The Re.2000 G.A. is a modification of the Re.2000 serie 1. The external appearance has not changed much, but it has an extra fuel tank in the fuselage, armor for the pilot, and provisions for bomb racks. The G.A.'s performance is largely the same as the serie 1 and it can be used as a fighter or fighter-bomber as needed.

The Re.2000 G.A. has a similar empty weight to the Re.2000 serie 1. The much larger fuel capacity (by about two times) increases the maximum takeoff weight and the climb performance does suffer if full fuel is taken, but at lower fuel loads the differences are minor. The top speed is lower by a few km/h at all altitudes.

As with the serie 1, the Re.2000 is a fairly balanced jack-of-all trades fighter for its battle rating. The climb rate, acceleration, and agility are all good. The top speed is decent and it should be able to outrun all biplanes and some early monoplanes. The turn rate is enough to tangle with most other monoplanes other than Japanese aircraft. It picks up speed quite well in a dive but the controls tend to lock up at over 500 km/h IAS, so attention should be paid to the throttle during extended dives.

The Re.2000 G.A.'s armor protection is a welcome improvement over the unarmored serie 1. The pilot protection should be sufficient to avoid pilot-snipes from behind, but keep in mind that there is still no bulletproof glass in the cockpit canopy. In head-ons, the pilot is only protected by the large radial engine, and even that does not stop a lucky bullet from hitting the pilot's head.

The fuel tank in the rear fuselage behind the pilot can be ignited by bullets from the rear and if this happens the results are usually fatal. Do not let an enemy constantly pepper the Re.2000 G.A. from the rear, even if they only have rifle-calibre machine guns.

The Re.2000 G.A. has typical armament for an early Italian fighter. The twin 12.7 mm heavy machine guns are underwhelming, generally considered the second worst heavy machine guns in the game. They have very poor ballistics and a mediocre rate of fire, being incapable of dealing serious damage outside of 300-400 meters. Their one redeeming quality is the availability of AP-I rounds for igniting unarmored opponents. For best results, use the Air Targets belt, engage targets at close range, and lead generously.

The Re.2000 G.A. can be outfitted with the following ordnance:

These bombs are a main selling point of the Re.2000 G.A. The twin 50 kg bombs are very small and limited in power; they require accurate placement to even damage unarmored targets and armored targets practically need direct hits. The 100 kg bombs are significantly more usable and their combined blast radius is enough to not require pinpoint accuracy against armored targets.

The Re.2000 G.A. can be used in the same way as the Re.2000 serie 1 in the air superiority role. The bomb load is not large enough to be worthwhile against ground targets or base bombing, especially since the Re.2000 G.A. does not have an airspawn, so using it as an attacker or bomber is not recommended.

Try to gain as much altitude as possible at the start of the match. The Re.2000s have good climb rates for their rank and can fulfil an energy fighting role if an altitude advantage is attained. A goal of around 3000 meters of altitude should be reasonable. Keep an eye on the engine temperatures during the climb and throttle back as required. Once enemy fighters are spotted, look for a target below the Re.2000 (but not more than a kilometer or two below) and wait for a good opportunity to dive on them. The Re.2000's guns are rather poor and the first pass should not be expected to secure the kill against all but the most fragile targets, so after firing off a burst, zoom climb back up and prepare to dive again. Repeat this process until the target has been worn down in energy, at which point the Re.2000 can switch into maneuvering combat as needed to finish the job. This is a reliable tactic for most Italian aircraft and the Re.2000 offers a good chance to practice it.

Keep an eye on the indicated airspeed during dives and start throttling back before the compression becomes a major issue. The actual wing rip speed of 740 km/h IAS is solid for the Re.2000's rank and unlikely to be reached in normal combat.

Going after well-protected enemy bombers and attackers should not be a first choice since the Breda-SAFAT machine guns struggle against anything with decent constructional strength and armor. Defensive gunners can also do a number on the Re.2000 G.A. since it still lacks bulletproof glass for the pilot. For this reason, avoid committing to head-ons; dodge early and try to get on your opponent's tail.

The Re.2000 G.A.'s bomb armament is significantly more useful in combined battles. At the battle rating of 2.0, a pair of 100 kg bombs is capable of destroying most vehicles and the Re.2000 can compete in low altitude dogfights. Against tightly clustered and poorly protected targets, even multi-kills are possible. But do not expect tremendous explosive power; those who want a large bomb delivery should consider the Italian Stuka instead.

Gain some altitude after spawning in and start looking for enemy tanks. The best targets are those that are distracted and not moving, which is important since the bombs do not have a generous blast radius. Enter a fairly steep dive, dial back the throttle, and drop the bombs just before pulling up. Deep dives are not recommended to maintain maximum controllability.

After the bombs have been expended, extend away, loop around, and start climbing again. It is best to switch to hunting aircraft as the Breda-SAFAT machine guns have terrible ballistics and penetration against ground targets. Only open topped vehicles can be realistically damaged by them, so if none of them are around, the bullets are much better spent on enemy fighters. Stick to energy fighting if possible but also take advantage of the Re.2000's manueverability, which tends to be more important at low altitudes, if not fighting biplanes. Be wary of attacking enemy SPAA since the disappointing frontal protection is again a major liability against heavy machine guns or cannons.

The Re.2000 "Falco I" was the Reggiane company's first successful fighter design. Taking some design notes from the Seversky P-35, the Re.2000 was a very capable design compared to other early Italian fighters like the Macchi C.200. It was an all-metal aircraft like the C.200 but boasted unique elliptical wings and sleeker aerodynamics. Overall performance was better than the earlier Italian monoplanes and it could even compete with the German Bf 109 E. The Re.2000 did have several issues as a prototype: the wing mounted fuel tanks were not self sealing and the engine was unreliable. It also flew and become operational about two years later than the C.200 and G.50. In light of this, the Regia Aeronautica declined to order the Re.2000 for mass production and it was largely produced for export to countries like Hungary and Sweden. The Re.2000 did provide a basis for more successful aircraft, its immediate successor being the Re.2001 with an inline engine. A special catapult-launched variant, the "Re.2000 Cat.", holds the distinction of being the perhaps only navalized fighter used in combat by the Italian Navy in World War II.

The Re.2000 G.A. was a subvariant of the third production series of the Re.2000, of which 12 were manufactured. This series featured a new 170 litre fuel tank installed in the rear fuselage, racks for bombs or fuel tanks under the fuselage, and minor modifications to the canopy and radio equipment.

The Re.2000's service in Italian hands was limited. Only a small number were procured by the Italian Air Force and the aircraft often experienced issues with maintenance and reliability. It did feature a long range, which was put to use in 1941 when a special long-range escort and reconnaissance unit, the "Sezione Sperimentale Reggiane", was formed. It operated out of Italy but conducted missions into North Africa. The unit was credited with only destroying one Blenheim bomber and switched to other aircraft later that year.