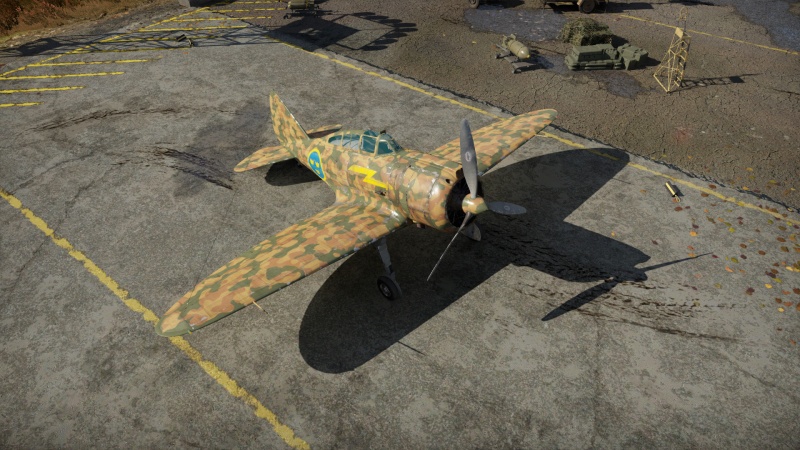 This plane is a carbon copy of the Italian Re.2000 serie 1 in everything but the ammo belts available. Because of this, it flies like its Italian counterpart.

Its playstyle is similar to that of a turn-fighter/energy-fighter. It turns well, but not enough to counter biplanes. It can energy fight, but its energy retention is average. Acceleration in a dive slightly above average but unfortunately the rudder starts to compress at 400 km/h, and increases dramatically above 500 km/h. It is a jack-of-all-trades but master of none.

The J20 does not have any armour, like its counterpart, the Re.2000 serie 1. However, it does have 2 self-sealing fuel tanks underneath the pilot. Despite this, it is prone to fires, and due to the proximity of the fuel tanks to the pilot, a fire is likely to be fatal.

Akan m/40 was the designation the Swedish gave to the Italian 12.7 mm Breda-SAFAT machine gun. Despite this, the gun lacks the incendiary belts found on the Italian planes mounted with this gun. The Tracers belt is easily the worst, as it contains only Ball ammunition with a tracer component. It is recommended to use either the Air targets or Universal belt, which are basically the same belt but with ammo types changing position on the belts.

The J20 is excellent at turnfighting. It can out-turn most contemporary aircraft. It is not recommended to fight enemies head-on due to its weak armament of 2 x 12.7 mm Akan m/40 machine guns. Boom and zoom is not a great playstyle for this aircraft as its control surfaces lock past 500 km/h. The aircraft is not equipped with any suspended armaments, which makes it unfit to attack ground targets.