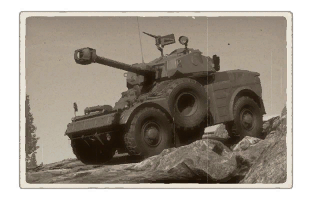 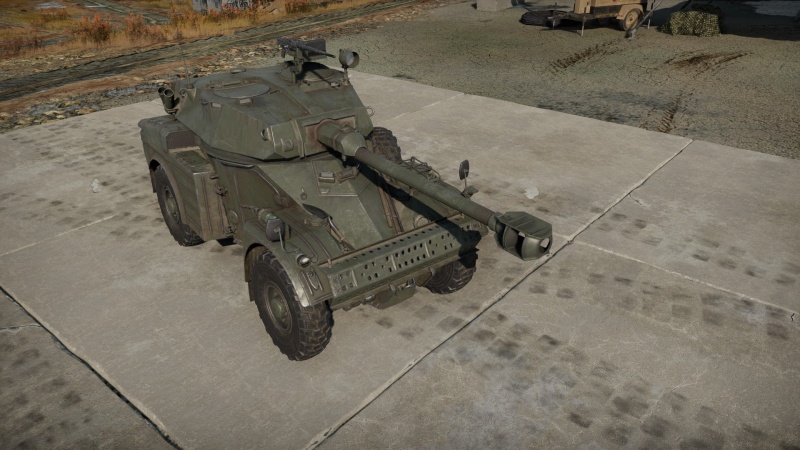 The AML-90 lacks protection against heavy machine gun fire and is susceptible to damage by light machine gun fire. The crew is located in a rather small compartment, making the armoured car prompt to being knocked out by a single shot from almost any direction. It is also vulnerable to overpressure, meaning chemical energy ammunition will take out your vehicle regardless of where they impact. A kinetic energy ammunition can damage your AML through the projectile itself or the spalling generated but the inflicted damages are lesser and has a higher chance to knock out the crew members or critical modules than to destroy the vehicle. It should be noted that the thin armour has a chance to not activate fused shells like APHE, APCBC, etc, although it will trigger HEAT, HEATFS, HE and ATGM.

The AML-90 uses a powerful 90 mm DEFA F1 low pressure cannon. The AML-90 comes with a stock OCC 60-62 HEATFS ammunition, capable of penetrating most tanks at its BR at any distance. It should be noted that the AML-90 only carries 20 rounds at max, meaning all rounds should be aimed for a kill shot as the small capacity will make the tank ammunition deplete faster than in other tanks if precautions are not taken. Commanders should always shoot to kill in the least shots necessary, know center of mass, ammunition racks, etc to successfully engage a target. 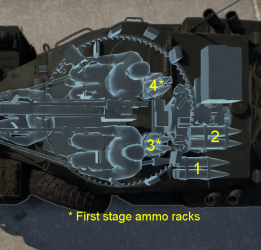 Ammo racks of the AML-90

The small calibre of the A-A-F1N machine guns makes them largely ineffective against all armoured vehicles but the ones with an open compartment. They still can be used to ping targets as a rangefinding help or to mow down minor obstacles blocking your line of sight.

AML-90 should be primarily used as a scout flanking vehicle due to its high speed, low profile, scouting capabilities and firepower (tremendous for such a small vehicle). The AML-90 has primarily 3 uses:

Due to the high speed and really powerful gun, the AML-90 can be used to hit any enemy from the back. This tactic should be a "Hit n' Run", you should disable or destroy targets and leave before they can engage you. The powerful gun can even be able to take on a Maus or E-100 if used properly (320 mm of penetration at all ranges at 0°). Use smoke to cover your trail when you have been spotted.

Despite the optics not having a huge zoom, it is enough to be able to detect, target and engage enemy vehicles at all ranges thanks to the HEAT-FS round. Be aware of your ammo as it can only carry 20, so make all shots count. It also creates a relatively small smoke trail when firing compared to other cannons at the battle rating (105 mm, other 90 mm, 122 mm) thanks to the muzzle brake. Bushes can also be used to make this vehicle invisible due to its low profile. A big bunch of branches can cover almost 70% of the front of the AML-90, making it a moving and deadly bush. It also creates a small engine sound that will be, most of the time, masked up by other tanks, giving you a stealth capability which can be exploited in urban combat.

In the 1950s, the French Army was still operating Daimler Ferrets that were becoming obsolete. For their replacement, French companies were solicited to produce a light armoured car. Panhard proposed the AML in 1957, along concurrent projects like the ELC AMX.

The first prototypes were tested in 1959 and the vehicles entered service in 1961. The early versions were armed with a 60 mm mortar in the turret. A new turret integrating a 90 mm cannon was developed the same year they entered service. The AML was an export success with many armies around the world adopting the AML 90, in particular African or Middle-Eastern countries with limited budgets. Almost 5,000 units were produced.

The AML 90 saw service in the French Army and in numerous armies around the world, the most renowned foreign operators being South Africa, Spain, Israel, Saudi Arabia and Iraq. The AML 90 saw combat action during many conflicts throughout the years: Six-Day War, South African Border War, Iran-Iraq war, Toyota War among the most know and remains in service until today.