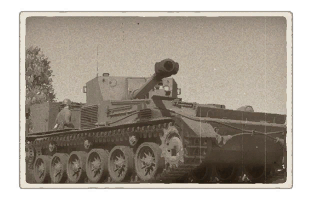 The armour on the SU-100P is mediocre except against low-calibre machine guns. Due to being an open vehicle, any tank with machine guns is able to kill the crew (with exception of the driver). This has its benefits as it is considered a "glass cannon with paper armour", meaning it barely has armour but said armour is thin enough to not trigger APHE fuses or create any sort of spalling at all, making the survivability of the SU-100P an unreliable armour yet effective in some cases. The main issues with the tank's survivability are front shots. Rounds fired at the hull will not only destroy engine but will create enough spalling to take a considerable amount of crew members, not only the driver but also the loaders. The crew on the turret are somewhat safe due to the high elevation. This is also an issue as the spalling can over penetrate and hit the ammo rack which is located at the back of the tank. Side shots, on the other hand, will only take the engine, lit the tank on fire and kill the driver if the round is fired at the center of mass of the hull, leaving the turret fully operational. Due to the construction of the turret, most front shots will take 2 crew members at most (commander and a loader or gunner and a loader). Front shots (unless they are at an angle) will not disable your breech most of the times, side shots will destroy the breech and take the two turret members. Due to the way the turret is arranged, most of the players will kill your commander trying to disable your gunner (as gunner in most tanks is located at the left side of the turret if seen from the front, in this case the gunner is at the right side of the turret if seen from the front) leaving them defenceless while they reload and retreat and only being able to fire machine guns but the armour is enough to stop machine gun fire.

The armour on the SU-100P is best described as non-existent and although it may sometimes not trigger APHE fuses it would be unwise to rely on it in any way especially since most of your crew is exposed to MG fire and overpressure mechanics. 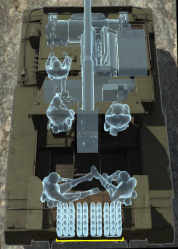 The SU-100P is never to be played as a frontline vehicle as the open hull structure is the main weakness which will make enemy team get a free kill by just using their machine guns, this is why the SU-100P should perform the support role. Support role has a wide variety of tactics and course of action, going from a simple cap defender to the enemy's worst flanking nightmare. The tank is one of the most agile, versatile and fast tanks at the battle rating with a really powerful cannon, able to one shot practically all the vehicles it faces, most of them even frontally.

Since many opponents will see the SU-100P immediately due to Arcade markers, it is necessary to either avoid general sightlines or use cover and/or solid sight obstructions to shield the SU-100P from immediate destruction. Whenever you have to leave the cover to move, aim the gun in direction of the presumable enemy position, as otherwise they will machine gun the entire crew in a single swipe. The constant airstrikes of AB will likely destroy the SU-100P, as players tend to aim for vulnerable tanks or for the tanks of the top players on the enemy team. In the case if you match both criteria the entire enemy team might just focus on strafing your tank and there isn't much you can do, but try to destroy every fighter on the enemy team by calling one yourself. For the same reason, the SU-100P is not easy to use in a losing team or as a third tank in a lineup.

The stock performance of the SU-100P is not enough to get into position fast or fight most opponents fair and square, so more obscure arcade aim assist functions should be abused. For example, it is possible to fire through many buildings with kinetic shells, and with high keen vision it is possible to find enemy tanks and briefly mark them while standing behind a house. After that, even though the SU-100P can't scout and make markers remain active for a while, it still can select the tank and fire at its silhouette into presumable weak part semi-blindly before it disappeared. Generally, enemies do not expect such trickery and do not respond to such shots, because they do not see who fires at them, or because they use HEAT projectiles and can't fire through obstacles, or even do not understand how that works. Even though this strategy is only available on certain maps, it can allow for some RP gain to unlock the best shell, which can penetrate most down-tier tanks head-on, including panthers, without much issue.

After gaining some upgrades to douse fires, increase accuracy and penetrate its opponents easier, the SU-100P can imitate the YaG-10 (29-K)'s playstyle by firing broadside to the right, as many opponents will either hit the engine, which shields the driver, or hit one or several of the turret crew members. For better results, some temporary cover can be chosen as to avoid being fired at by an entire squad and to disallow better players to hit the ammo rack directly, as it could easily happen with aim assist on. After the mobility upgrades were unlocked, the SU-100P can finally flank like a light tank and play super aggressively, as often it only loses non-critical crew when first shot. The rest is up to luck, as each shot can end the SU-100P or do almost nothing depending on enemy aim quality and ammo choice.