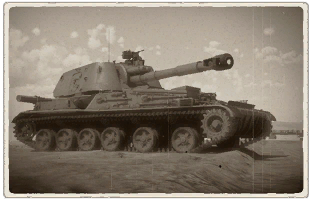 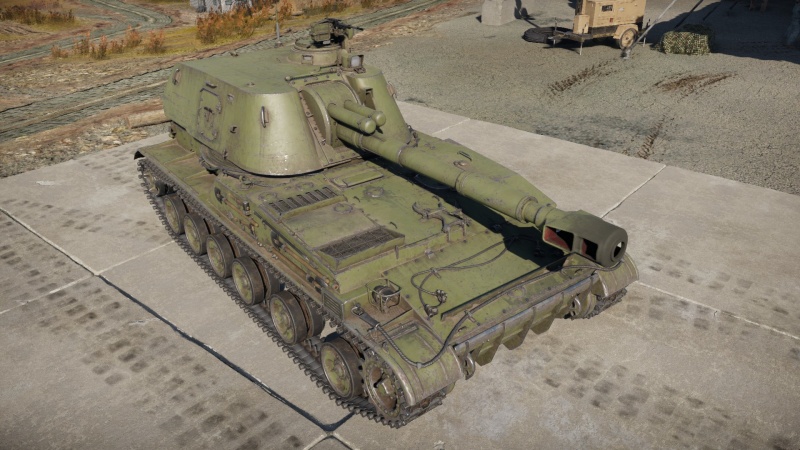 The 2S3M is a rank IV Soviet tank destroyer with a battle rating of 6.3 (AB/RB/SB). It was introduced in Update "Winged Lions".

The survivability of the 2S3M is a very situational one. Due to having absolutely no effective armour to stop any munition but small firearms, it is very vulnerable to all damage. However, solid shots such as APCR have a chance to go right through the armour without making any damage whatsoever. The armour of the 2S3M can also partially stop artillery strikes fragmentation depending on the distance between the explosion and the platform. The best armour of the 2S3M is not to be seen. As a howitzer with a very potent weapon, it should be never stay stationary after firing, as this can disclose the location of the platform and be killed.

The 2S3M is not exactly agile, but it is nowhere near being sluggish. It takes time to accelerate and brake due to the heavy weight of the main gun, but it reaches the top speed fairly easily. It holds a max speed of 60 km/h, which is fast for a vehicle. As it is based on the SU-100P hull, it has a very decent turn rate and reverse speed, being able to reach up to -14 km/h while on reverse. It has a very capable cross-country capability and when track module is researched, along with a much better turn radius.

The 2S3M has access to the 152 mm 2A33 howitzer, a very potent gun with a significant firepower. It is the only howitzer in game capable of firing HEAT and APCBC rounds. The performance of the gun leaves nothing to expect, decent muzzle velocity for rounds as well as a slow but steady aiming speed. While it is slower in performance compared to the Type 75 SPH or the Bkan 1C, it holds one of the most devastating rounds in game: the 3OF25. Holding more than 10 kg of TNT equivalent explosive mass, it is able to annihilate any ground vehicle with almost any hit. The 3OF25 (PF) is a variable time fuse high-explosive shell, allowing it to take down aircraft far more effectively than normal shells. Additionally, this fuse works on ground vehicles which can allow the 2S3M to destroy light to moderately armoured vehicles hiding behind terrain by exploding over the roof. The fuse arms past 300 m, so utilizing this feature in close combat would not work.

The 2S3M should be used as a support gun, able to take down even the heaviest of targets with a single shot. Teammates should be supported with the power of this weapon as well as the variety of projectiles available to it. It is not to be played as a frontline vehicle due to the immense reload time and aiming of the weapon. However it is a very good guerilla combatant and skirmisher if used as a backup for frontline vehicles.

By 1964, NATO was equipped with the M109 self-propelled artillery. However, the Soviet army were still using artillery developed during WWII. During an exercise at Yavoriv military base, senior officials determined that the various types of artillery developed during World War II were not suitable for the war at that time. In order to make up for the technological gap with NATO countries, Resolution No. 609-201, issued by the Central Committee of the Council of Ministers of the Soviet Union on July 4, 1965, was finalized, starting the development plan for the new 152 mm self-propelled gun. In 1971, the Soviet Union passed the acceptance of the 2S3 self-propelled gun and began mass production.