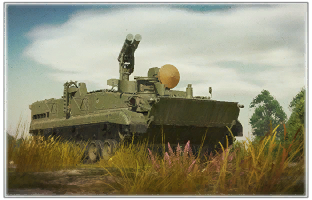 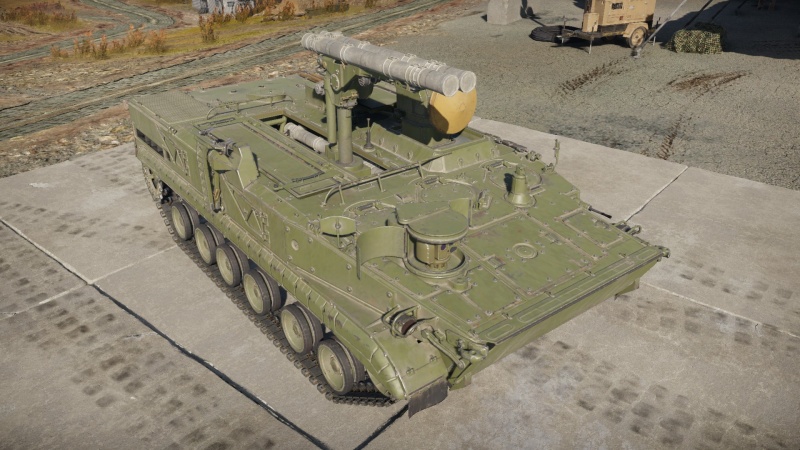 The 9P157-2 Khrizantema-S is a rank VII Soviet tank destroyer with a battle rating of 9.3 (AB/RB/SB). It was introduced in Update "Starfighters".

The Khrizantema-S is very lightly armoured and only have 2 crewmembers, so it will barely survive any attack stronger than 7.62 mm MG to the hull. It, however, has some RHA plates on front, which are also angled closer towards 80°, making it capable of deflecting heavy machine gun fire and, at times, autocannon fire, or even non-apfsds shells.

Due to armour thickness, almost any big shell at its rank will hull break it on direct hit to the hull, unless slowed down by some internal module. The tank is also very unlikely to survive hellfire missiles or rocket rain.

Due to this, it requires hulldown or hills just to be able to fight, and it should avoid direct fights and artillery fire at all costs. To retreat from battle or to exploit its weapon system it can also use ESS, creating a smoke wall behind and around itself.

The weakness of armour is further prolonged by fact, that even in hulldown its launcher and radar are still exposed and can be hit with HE, HESH or HEAT, and, unlike with the most of other hulldown ATGM tanks, HEAT can be landed on top of it in such a way, that it will destroy Khrizantema-S via hullbreak, allowing other ATGM tanks to defeat it, if their reaction and aim is better. It is worth noting that kinetic shells do not hull break tank on radar hit, and it automatically hides itself when being damaged, to increase chances of survival against inexperienced opponents.

The Khrizantema-S's acceleration and mobility is somewhat closer to track-using light tanks due to it's low weight, but it has rather limited maximum speed, when compared to top rank VI or VII vehicles. In RB, it's offroad forward speed is generally around 45 km/h. It's reverse speed is also limited, but will allow it to back out of a fight with about 15 km/h on demand.

The Khrizantema-S's climbing ability is mediocre, but it should be able to climb any hills when spaded.

The Khrizantema-S can swim with greatly reduced movement speed.

9M123 ATGM
Autoloader
Automatically feeds projectiles into the breech. The speed does not depend on the skills of the loader
Ammunition16 rounds
Belt capacity2 rounds
Reload15.0 s
Fire rate60 shots/min
Vertical guidance-5° / 15°
Horizontal guidance-85° / 85°
Fire on the moveup to 5 km/h
Main article: 9M123

The Khrizantema-S has an ATGM handle similarly to Shturm-S. It reloads two of the missile launchers at once, and only reloads them after both were used. Since it's completely automated, it will always take tank 15 seconds to reload.

Sniper optics and laser pointer are located on the very front-right of the hull, separately from the launchers. It must see tank's target for semi-automatic aim (mouse aim) to work.

Handle can aim in about 160 degree sector in front of the tank, but has problems with pointing down and too high up, which makes sniper aim to be more useful in some kind of open, flat territory, where tank can fire at targets directly. If it must be used in some kind of cluttered street, it's best to approach targets carefully while being mindful of the fact, that launcher is located behind sniper scope and not just above it, to avoid misfiring and hitting tank's own cover.

Similar issues follow radar aim as well, due to radar's limited vertical traverse, but it can guide missiles at angles far beyond capability of laser pointer.

Missiles themselves seem to have high level of horizontal mobility, but significantly lower vertical mobility - they can take sharp turns into sides, but they will refuse to drop down at the last moment, so it is better to keep then on level with intended target, unless they are guided by radar, in which case you have no control over them and they generally go for the turret neck or the centre of the target. They will likely catch any slow flying helicopter, that does not immediately perform a drop straight down to the ground (which is very bad for RB helicopters and may result in unintended crash by itself).

Missiles can fly up to 6 km away before running out of fuel. It makes them useful against both ground and air, but it may fail to reach overly cautious rank VII helicopters, due to them being able to fire from 8 km away.

9M123 is an extremely powerful tandem missile, which can potentially penetrate any NERA currently in the game on direct hit and will definitely penetrate any ERA due to it's power alone and tandem technology used to specifically breach ERA.

9M123F is the same carrier missile, but it is loaded with HE instead. HE missiles have less shrapnelling range than HE shells seen in conventional tanks and are generally used to harass other light vehicles, which sometimes cannot be simply destroyed with HEAT payload.

The Khrizantema-S is equipped with a single search and tracking radar, mounted to the left of missile launchers. The radar system is incapable of scanning while tracking, and generally can only lock on targets within a 20° arc from the front of itself.

Radar is usually following targeting reticle and only scans in chosen direction, however, once locked, it can automatically turn up to 85° degrees in either direction in front of the tank, continuing tracking its target as long as it didn't go behind Khrizantema-S.

Vertically radar also has rather limited angles at which it can lock and track, but exact angles are difficult to measure. It also seems to rely more on hull position, rather than aiming reticle, when aiming at the sky. For that reason, it is better not to rely on search mode whatsoever and try to lock onto targets manually (by pressing lock-on button in sniper mode while aiming at the target) to see if tank needs to be moved, or it's just radar being picky.

Sometimes it also can lock on and track hostile tank at very long ranges, while aiming at them almost through the ground, allowing missiles to be launched over hills with minimal tank exposure and giving the Khrizantema-S an unexpected advantage, particularly noticeable at longer ranges of over 1.8 km.

It is also possible to check if enemy tank is dead or alive by locking onto it. Dead tanks generally do not pose any interest for the radar. (Probably unintended feature)

Radar is hidden within vehicle whenever it is powered down, seriously damaged, or when tank is travelling. Since radar is a valid target for explosives, sometimes it is worth turning it off on purpose.

In the eighties, the KB Mashinostroyeniya in Kolomna began work on an all-weather anti-tank missile system capable of efficiently detecting and destroying ground armoured vehicles, helicopters and other units at any time of day and any visibility level.

The system was chosen to be mounted on the BMP-3 chassis – a highly mobile, all-terrain platform that could even navigate water. That is how the 9P157-2 Khrizantema came to be – it became a unique unit capable of simultaneously following targets on two separate channels – on its radar system and through visual contact.

Moreover, the abovementioned radar can detect and take aim at targets at any time of day and visibility level (be it night, smoke or sandstorm).

The system's missiles are capable of penetrating tank ERA along with over another 1,000 mm of armour beneath it. The Khrizantema was put into service by the Russian army in 2004 and has since undergone modernisation several times. The missile system has also been exported abroad and deployed by other countries.