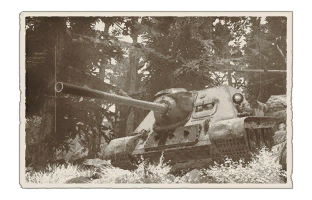 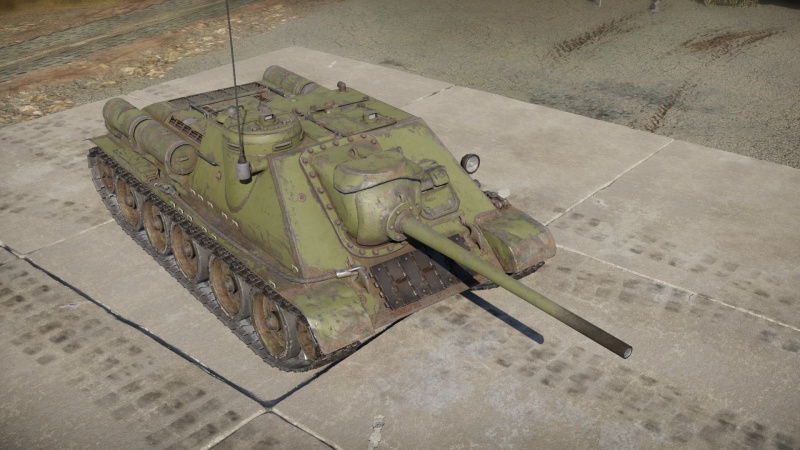 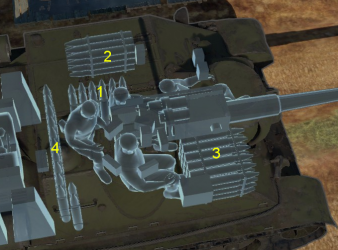 Ammo racks of the SU-85M

The Panthers are one of the most common tanks around BR 5.7, and they pose a great threat with their deadly long 75 mm cannon, thick frontal armour and adequate speed. You want to avoid engaging them at long range as the SU-85M has only x3.5 scope magnification, making long-range shooting super hard. Engage the Panthers within 500 m and avoid shooting their frontal hull. Their biggest weak spot is the gun mantlet, which is only 100 mm thick and has a flat part in the middle. That is where you want to aim at, the SU-85's APHE has sufficient damage to instantly destroy the Panther even from its turret. The second weak spot is the sides, which more often than not instantly destroys the vehicle. Generally, APHE is enough to deal with the Panthers, and no APCR is needed. The APHE shell loves to chew through the Panther's thin side armour, even if it's angled.

The Tiger's weak spots are the opposite with the Panthers. Their hull is unsloped and rather thin, while the gun mantlet is weirdly shaped and can absorb quite some shells. The best engaging range remains the same, within 500 m. If the Tiger is angling, aim at the turret ring to disable the gunner and destroy the turret traverse, or aim at the hull side below the side skirt, which is only 60 mm. If it is not angling, aim between the driver's vision port and the MG for an instant kill. Avoid shooting at these two parts as they tend to bounce/absorb shells. For the Tiger E, don't shoot at the lower glacis as there will be add-on tracks installed there, making it harder to penetrate. Its transmission will also absorb all damage.

Engage with caution. The 76 mm could penetrate through the front hull with ease at average combat ranges. The front hull armour is impervious to APCR in most cases and could bounce most AP shots if angled correctly. Focus on weak spots such as the lower side armour and the turret ring, or even the shot trap on the lower sections of the gun mantlet.

Picking a long-range fight with Sturer Emil from the front is suicide, the Emil's 128 mm will reach and penetrate the SU-85M before it is in position to fire back. Only engage if certain the Emil is unaware of the SU-85M's presence on its flanks, or point it out to allies for more mobile friendlies to engage and destroy it. Allies could also divert its attention from the SU-85M to allow for an 85 mm shot into the thin armour on it.

The increasing armour thickness of the enemy's new heavy tanks necessitated a more powerful SPG. A newly planned 100 mm weapon was being reworked. So in July 1944, the 85 mm D-5-S85 cannon was installed in a newly designed SPG cabin with thicker 75 mm frontal armour, a spacious fighting compartment and a command cupola. This SPG was designated SU-85M and was produced until December 1944. The vehicle, equipped with a new gun mantlet, fired at a rate of 6-8 shots per minute. Its elevation angle was -5° to +25°, and its traversing angle was 20° (up to 10° to each side). In contrast to the SU-85, the vehicle's ammunition capacity was increased to 60 shells. The SPG's crew used PPSh submachine guns and F-1 hand grenades for self-defence.

In spite of all the SPG's advantages, its firepower was insufficient to combat enemy heavy tanks at long ranges.