Difference between revisions of "P-38G-1" 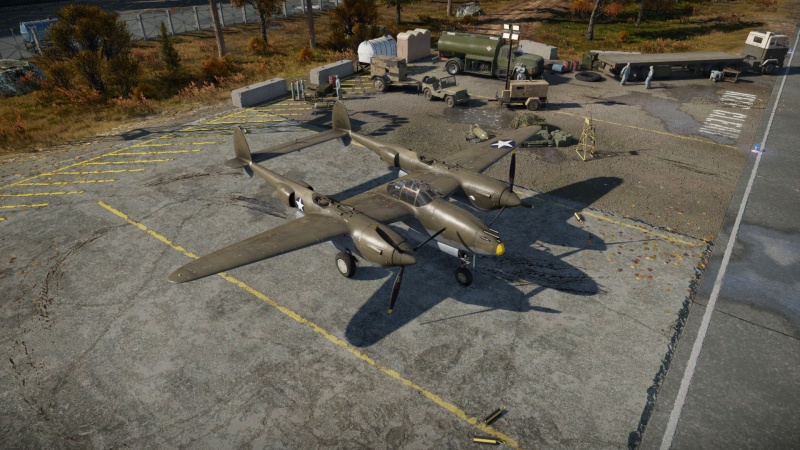 Despite being a heavy twin engine fighter the P-38G has a quite good overall performance. Its level speed is comparable to many single engined fighters and even faster than some of them. It can reach 550 km/h at the sea level and thanks to its superchargers the plane's maximum is speed is close to 660 km/h at 5000m alt. The cruising speed remains constant up to 11000m alt. That makes it a good medium and high altitude fighter and in most cases outperforms the opposition.

Acceleration in level flight is decent and when it starts diving it gets very good. However, it is required to keep an eye on the speed because the maximum structural speed limit is low in this plane. Of course due to the plane's configuration it suffers a lot from high speed compression, which starts close to 0.70 Mach.

Climb rate is comparable to other American fighters. The plane is able to reach 5000m in 4 minutes and 40 seconds which is quite mediocre. Its climb rate at 1000m is close to 18 m/s but, again thanks to the supercharger, it will not suffer so much at high altitude. When climbing from 5000m alt to 9000m alt it will outperform most of other fighters.

The P-38G's turn rate is quite good but depends a lot on its Fowler flaps. They do increase the lift significantly but at the cost of a proportional increase in drag too. Sustained turn rate is quite good, better than in almost every other heavy twin engined fighter but in most cases only comparable or worse to other single engined fighters. On the other hand the instantaneous turn rate especially with deployed flaps is very good and can help a lot with getting the guns on the target and high deflection shooting.

The other issue is its roll rate, at best it reaches 70 degrees per second at 400 km/h.

The way that Lighting's engines are mirrored in turn direction makes it so the pilot does not need to worry about the propeller torque effect as the propellers on one side negate the effect of the other. Furthermore, the plane doesn't require any trimming except for some elevator adjustments to fly in a straight line.

The P-38G-1 can be outfitted with the following ordnance:

The P-38G-1 is a medium- and high-altitude fighter which excels in anti-bomber roles and when working with teammates to destroy enemy fighters. Its manoeuvrability is unsurprisingly worse than that of single-engine fighters, but is quite good compared to that of other heavy fighters. The plane excels in a boom and zoom roll, where its powerful armament and good energy retention are brought into the spotlight.

In a turning engagement, the P-38 fares better than most other heavy fighters. When engaging its flaps, it can turn surprisingly well; however, these flaps bleed a considerable amount of airspeed, and sustained turning is unadvisable in most scenarios. Most single-engine fighters will be able to outturn the P-38. All of this means that engaging in furballs is unwise. It is usually better to boom and zoom, going in and out of the dogfight while evading enemy fire.

If there is an enemy on the P-38's tail it is best to dive away, utilising the plane's great acceleration; or to fly towards teammates. The P-38's lack of manoeuvrability compared to single-engine fighters means that attempting a rolling scissors or other type of reversal is often very difficult. Indeed, the plane suffers especially from a poor roll rate, which although excellent for a plane of this size, is not comparable to that of planes such as the Fw 190.

With a 20 mm cannon and four machine guns located in its nose, the P-38G-1 has formidable firepower. This can be used to destroy enemy bombers to great effect (the P-38 finds much success in a bomber-hunting role), and to easily destroy lightly armoured ground targets. Smaller enemy planes such as single-engine fighters are especially easy to take down.

In ground realistic battles, this plane can be used reasonably well to destroy ground targets and ensure air superiority. With 6 rockets and nose-mounted guns, the P-38 can destroy lightly-armoured and open-top vehicles easily, and also engage some more heavily-defended targets.

The G variant was created at the end of 1942 and was based on the E and F variants. The G had a more powerful turbocharged Allison V-1710-51/55 engine and benefited from more automated engine management. The G model had lighter weight and handling characteristics compared to the later J and L models, and was therefore favoured by some of the more experienced pilots despite accumulated age and wear in theatre.

The armament suite was formidable and consisted of a 20mm Hispano AN/M2 cannon with 150 rounds and four 12.7mm Colt-Browning M2 machine guns with 500 rounds apiece. The fuselage of the F and G models was reinforced, and the operating manual allows for the carry of two extra 300-gallon (1,136-litre) fuel tanks, or up to 1,100 lbs of external ordnance. However, in-theatre operational requirements often dictated the need for heavier ordnance, and it was not uncommon for 2 x 1,000 bombs to be hung on the racks. Field modifications allowed additional external ordnance to be loaded, including 2 x M10 triple-tube rocket launchers, or installation of outer wing pylons allowing 4 x 500 lb bombs to be carried outboard of the engines (two bombs per pylon) - thereby allowing long-range drop tanks to be carried simultaneously on the standard inner-wing racks.

One of the P-38's unique characteristics was its incredibly long range, especially for a fighter - a trait which made it ideally suited to bomber escort, intruder patrols, and long-range strikes, such as the famous "shuttle missions" over Germany to Ukraine. Perhaps the most exceptional display of the P-38G's capabilities was Operation Vengeance - a war-changing mission to kill the Imperial Japanese Navy's brilliant naval strategist and mastermind of the Pearl Harbor attack, Admiral Isokoru Yamamoto. The highly-secret 18 April 1943 interception successfully brought down two G4M1 bombers - one transporting Adm. Yamamoto, the other carrying his chief of staff. Despite the mission's success, the U.S. kept the operation a state-secret for some 35 years in order to protect the intelligence sources and methods used to plan the operation.

The P-38 was widely used by the Army Air Force (USAAF) in all theatres and was the plane used by the United States' top aces: Richard Ira Bong (40 kills) and Thomas McGuire (38 kills). Other noteworthy aces of early P-38s include Jack Ilfrey and Dixie Sloan of the Mediterranean Theater; Robin Olds and John Lowell of the European Theater; Charles McDonald, Gerald Johnson and numerous others in the Pacific Theater. George Welch, famed for his exploits in a P-40 during the Japanese attack on Pearl Harbor also became a P-38 ace of 12 kills. In addition, the famed 'Lone Eagle', Charles Lindbergh, splashed a Ki-46 at the controls of a P-38 while on a visit with the 475 FG in the South Pacific.