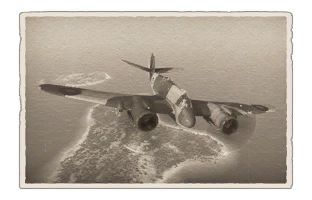 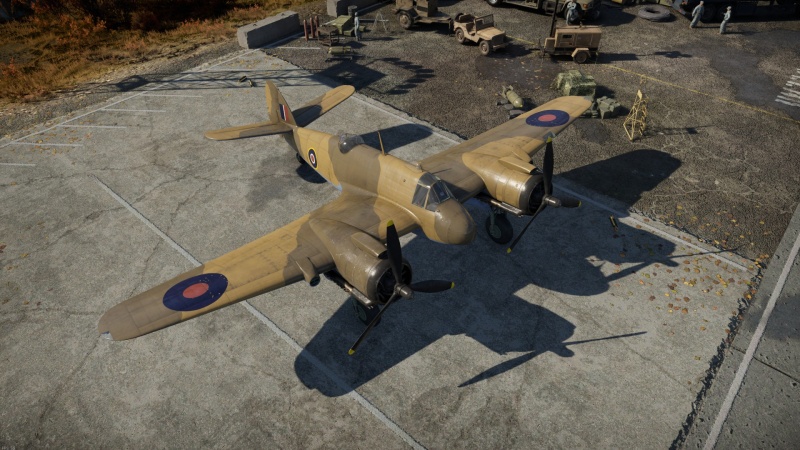 The Beaufighter Mk VIc is a rank II British twin-engine fighter with a battle rating of 3.0 (AB/RB) and 3.3 (SB). It has been in the game since the start of the Open Beta Test prior to Update 1.27.

The Beaufighter Mk VI is one of the best early-tier heavy fighters. When its engines and survivability are fully upgraded, it is truly a bomber killer to behold, capable of bringing down any rank 1, 2 or 3 planes with ease. Unfortunately, there are several drawbacks to the amazing power of the 4 x 20 mm Hispano cannons. You will normally spawn quite high, so use that to your advantage when attacking enemy planes. The recommended speed of this plane is only around 500 km/h (310 mph). Any higher results in severe and poor handling, making the heavy armament useless if your quarry turns. Therefore, the Beaufighter is not suited for BnZ, but better for head-on and tail-end combat. If you are caught by any single-engine fighter, try to dive and climb. If that does not work, resort to the turret or turning. The high fire rate of the turret makes it especially effective for pilot sniping if you are accurate enough.

The Beaufighter Mk VIc is very stable because of its large size and 2 engines. It has a considerable amount of speed considering its size, and is rather manoeuvrable if you use the flaps correctly and do not stall. Stalling is a rather large issue in this plane because of its ok climb rate, an enemy fighter will often out turn you and once it's behind you, you can only rely on your gunner.

The Beaufighter Mk VIc is armed with:

The Beaufighter Mk VIc can be outfitted with the following ordnance:

The Beaufighter Mk VIc is defended by:

Beaufighter Mk VIc is a heavy fighter with inadequate speed at level flight and poor acceleration. It's big and an easy prey for nimble and fast energy fighters that will likely make passes on it, having only a Vickers K (7.7 mm) as its defensive weaponry with limited field of view from side to side but an excellent view if an enemy engage from high altitude. The Beaufighter has an adequate climb rate for a heavy fighter and can engage bombers with some ease.

It's a heavy fighter that does not lack in firepower, equipped with four 20 mm Hispano Mk.I (20 mm), its only problem is that the cannons are prone to jamming quickly. Without upgraded cannons, the accuracy of the weaponry is inadequate, but they can be used to devastating effect when the shells do connect.

Enemies to be aware of are nimble fighters like Bf 109s and Yak-9s which are nimble and fast fighters to engage the Beaufighter Mk VIc.

As Britain geared up for war in the late 1930s, it became apparent that the RAF lacked modern fighters, particularly any long range aircraft or night fighters. Bristol had already began work on the Beaufort, itself developed from their earlier Blenheim design, and decided that to develop a long range fighter in as short a time period as possible, it would be quicker to develop an existing design than start a new one. The wings and tail were taken from the Beaufort and, with a new fuselage and two Bristol Hercules engines, the Beaufighter was born.

For use in the maritime theatre, some modifications were designed to patrol coastal areas and escort vessels. The designations of these variants ended with the letter C to indicate that they were used by the Coastal Command. The first modification for Coastal Command appeared in 1940 and had the designation Beaufighter Mk IC; this design included the addition of a maritime radio and navigation equipment. The next model designed for Coastal Command operations was the Mk VIC. After the various interim models had been powered mainly by the Rolls Royce Merlin, the Mk VI returned to the original Bristol Hercules engines. This powerful engine allowed the options of replacing the wing mounted guns with extra fuel tanks for longer range and the addition of bombs or rockets. By the end of 1942, most of the Beaufighter Mk.VICs had been modified to carry torpedoes, and in April 1943 they made their first torpedo attack, sinking two merchant ships off of the Norwegian coast.

A total of 5,928 Beaufighters were built.