Difference between revisions of "M551" 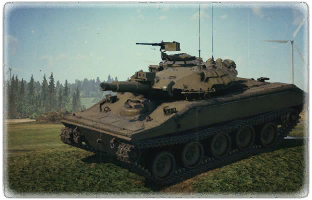 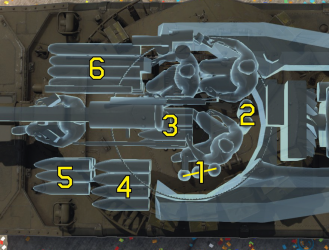 The Sheridan, even with the ability to fire ATGMS, is an extremely difficult tank to use due to it having no armour. Even some high-power MGs can penetrate the armour easily. The stock heat round while having high pen drops like a rock at range and bounces ALOT. Immediately upon reaching the tier 2 modifications research the ATGM missiles. Once those are unlocked the Sheridan becomes a fast and mobile missile platform that out ranges most vehicles in game. With only the stock HEAT always aim for ammo racks. This is pretty much the only way to destroy the heavier tanks. The mobile AAs will be the M551's biggest problems. While the Sheridan can drive circles around most of its heavy opponents, the fast anti-air turret can keep up with the M551, able to tear the armour to pieces. The ATGMs are a vast improvement over the HEAT rounds, one shotting pretty much everything and extending the Sheridan range past that of most of its opponents.

The Sheridan first saw service in June 1967 n the 1/63rd Armor Regiment at Fort Riley. The first air usage of the Sheridan came from the 1/17th Cavalry at Fort Bragg. Its first overseas deployment was to South Korea in November 1968 and Europe in January 1969. 800 Sheridans were deployed worldwide by 1971. Troubles with the 152 mm Gun/Launcher plagued the M551's early service life as attempts were made to fix the issues in the weapon's ammo propellant and ability to fire missiles.[1]