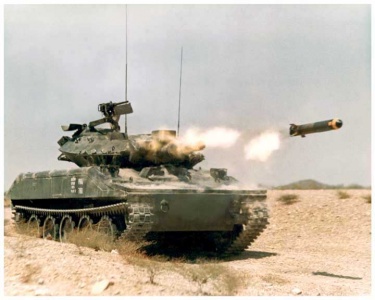 In the post-World War II time period, the U.S. Army's specifications for a light tank is for it to be light enough for air-transportation and with a large cruising range. The first post-war light tank, the M41 Walker Bulldog, didn't fit these specifications, weighing about 25 tons and having a short operational range. Developments afterwards tried to remedy this, which resulted in the T71 and T92 designs. The designs were promising, but the discovery of the Soviet PT-76, a light tank with amphibious features, prompted a new requirement for the light tanks to be amphibious as well. The T92 couldn't be modified for this role and was thus abandoned and the light tank design was reworked with the new specifications.

The new design took form under the designation XM551. The XM551 used new alloys, mainly aluminum, in its build-up to save weight. As such, the hull was made of an aluminum alloy while its turret was steel. The armour is suppose to be able to block heavy machine gun rounds, but it is too thin against regular anti-tank weaponry such as rocket launchers and mines. The amphibious feature is done with a fabric flotation screen integrated on the sides.[1] The design was easily air-transportable at 16 tons and could be air-dropped into battle via three methods: air-landed by plane, parachuted, or with a low-altitude parachute extraction system. The lightweight and usage of a 300 hp diesel engine gave the vehicle a great power-to-weight ratio that allows it to reach a speed of 45 mph, but the engine makes it quite noisy and its reliability under combat conditions was dubious.

Perhaps the XM551's most controversial feature was its armament, the 152 mm M81E1 Gun/Launcher. The gun was not very bad to say, the short cannon and large caliber made it an ideal infantry support weapon by delivering high-explosive shells or canister shots at the enemy. It was used to fit in the constraint space of a light tank, yet have enough penetrating power against modern tanks when using HEAT rounds sent via regular shells or by the revolutionary cannon-launched Shillelagh anti-tank guided missiles. Its criticism stems from its enormous recoil and its highly volatile propellant cases, the last of which made for a very troublesome firing device. The gun used rounds with a combustible case propellant charge to fire the shells. While the combustible case made it lighter to use and eliminate the cluttering of spent casings in the tank interior, the propellant was prone to catching fire by the slightest sparks and this remain the biggest issue during the tank's combat career. This issue had Ordnance wanting to change the cannon to a more conventional one due to its mechanical unreliability, but the M81 gun stayed to support the U.S.-Germany joint tank project, the MBT-70, which was to mount the same gun.

Nevertheless, XM551 was approved for Army standard in May 1966, adopted prematurely to prevent loss of fundings and production started in July 1966. It was designated the M551 Sheridan , named after the Civil War General Philip Sheridan. It officially entered Army service in June 1967. Between 1966 to 1970, 1,662 Sheridans were produced at a program cost of $1.3 billion. It's combat career would be plagued with issues from its technologically advanced main armament.

Even before it was sent to a combat theater, testing by TECOM (Test and Evaluation Command) showed the deficiency of the M551 Sheridan's cannon. In Panama, the combustible propellant was so bad that each Sheridan unit cannot carry more than one piece of ammunition at a time.[1] The combustible propellant could break open and spill its volatile content, absorb moisture and swell so it doesn't fit in the gun, and even leave behind residue of hot propellant behind in the gun, which could then ignite the following propellant when inserted into the cannon. The last of these faults accounted for 39% of the catastrophic detonations of the Sheridans. A solution for the residue propellant was to install a new system known as the Closed Breech Scavenging System (CBSS) which uses an air compressor to blow air through the chamber after firing, but while the breech was closed to expel the residue. Though this system mostly solved the residue issue, it lengthened loading time as the loader must wait for the CBSS to finish before the breech opened to be able to load the next round. The propellant case was redesigned in 1967 to solve the other issues, such as making it more resistant to breakage and issued with a neoprene bag to prevent the absorption of moisture. Another problem found with the gun was that its recoil could interfere with the missile launches by knocking the telescopic sight out of alignment when using conventional ammunition. All these issues labeled the Sheridan as a troublesome tank for the cost spent on it.

The Sheridan first saw service in June 1967 n the 1/63rd Armor Regiment at Fort Riley. The first air usage of the Sheridan came from the 1/17th Cavalry at Fort Bragg. Its first overseas deployment was to South Korea in November 1968 and Europe in January 1969. 800 Sheridans were deployed worldwide by 1971.

Its first combat service would be spent in the jungles of Vietnam, a worrying situation as the Australians rejected the Sheridans in 1967 after tests showed that the tank was "unsuitable for Vietnam type conflicts". The Sheridan was offered to the units stationed in Vietnam as far back as 1966, but they rejected it as the main gun was still faulty and it would simply be a "$300,000 machine gun platform".[1] Its main issues in the battlefield were the lack of anti-personnel ammunition, lack of night-fighting capabilities, and weak armour. A program commenced to improve the Sheridan for Vietnam usage, starting with a new flechette round, belly armour against mines, and improved sights for night-fighting. Once ready, the units still declined it as they viewed the Sheridan as much more vulnerable than the current M48A3 Pattons they are using.

The final decision on the deployment of the M551 Sheridans came from General Creighton Abrams, the commander of the US forces in Vietnam. Upset that the large quantity of Sheridans were simply sitting in US depots, Abrams ordered the chief designers and other important personnel involved with the Sheridan to get opinions from Lt. Col Burton Boudinot on the Sheridan's usage in Vietnam. The result was another modification to the Sheridan, most notably the removal of the ability to fire the Shillelagh missiles since it was believed the missiles will have very little impact in the Vietnam conflict. The modified Sheridans earn the nickname "Two-Box M551" since in the interior, all the complex mechanical instrument boxes were removed save for two. Priority went to machine gun ammunition and conventional cannon ammunition. Up to 230 Sheridan were rebuilt like this. The first Sheridan arrived in January 1969 and was taken with mixed opinions from lack of armour, but this opinion changed after a battle along a highway in Long Binh where the Sheridan's new flechette rounds account for about 125 dead enemy infantry. The HEAT round initially meant for armour fighting also found use in bunker-busting. The Sheridans were deployed alongside the M113 in the cavalry and helped improve the unit firepower.[1]

Opinions swayed again in February 1969 when the first Sheridan was lost in combat from a mine. The mine killed the driver and led to a catastrophic ammunition fire in the M551. This weakened support for the Sheridan as their previously issued M48A3's could withstand mines that knocked out the Sheridan. The adoption of special titanium armour helped improve mine survivability, but it often left the vehicle disabled in the field. Another main threat to the Sheridans was the ubiquitous anti-tank rocket launchers, which often ignited the M551's ammunition when it penetrated the armour. The ammunition fire melted the Sheridan's aluminum hull, leaving just the steel turret laying in the hulk. The Sheridan was also maintenance extensive, the absorption problem persist in the ammunition due to the jungle nature, and the Sheridan proved to have an unreliable engine due to problems of the jungle condition. Inside the Sheridan, the crew was often cramped inside a hot temperature turret that left them fatigued often.[1] While troublesome and having deficiency, the M551 still proved a helpful addition to the armoured force for being lighter and more mobile enough to maneuver through the jungles.

Despite all the improvements done, the M551 was never a popular vehicle. Replacements were considered in 1977 such as the X800 and the M3 Bradley. The year 1977 also started the Sheridan's path to retirement on the advice by General John Guthrie. Replaced in standard service with the M60A1 main battle tank by 1980, the only units to retain the M551s afterwards were the 82nd Airborne Division and the National Guard. During this time period, a mid-life product improvement program (PIP) started that modified the Sheridan with 26 mechanical changes that improved the vehicle with more modern technology, mainly in the machine guns and the gun sights. Another usage of the Sheridans in this time period was as mock-ups at the Army's National Training Center at the Mojave desert in California, where they are dressed up to look like Soviet vehicles to play as the "opposing forces" to train the army units on tactics in the battlefield.[1]

The next combat operation the Sheridan saw was Operation Just Cause in Panama, which is also the first and only time tanks were combat parachuted in history. A platoon of Sheridans along with a brigade from the 82nd Airborne Division was inserted in Tocumen airport on December 20, 1989. A Sheridan was destroyed when its parachute failed to deploy and another damaged when it landed in a marsh, but the remaining two Sheridans provided great asset to the overall operation. The Sheridans helped the airborne troops breach roadblocks and fortifications built up by the Panama forces. The M551s were a major morale booster and a psychological weapon as when the Sheridans were involved "enemy forces generally refused to fire or snipe at convoys or positions in the vicinity of the Sheridans."[1] Operation Just Cause ended with a victory for America, causing disproportionate damages to the enemy for relatively low losses. After Panama, the Sheridan saw their next usage in the Gulf War against Iraq in Operation Desert Shield and Desert Storm. The Sheridans of the 3/73rd Armor Regiment landed by plane in Saudi Arabia were the ones upgraded with the PIP kit. In Desert Shield, the Sheridans acted as a first-response defense lines against the Iraqis until better US forces could be moved in. In Desert Storm, the Sheridan saw their first large scale usage in tank-vs-tank combat against Iraqi tanks, probably T-55s or T-72's. The battle was also the only time the Shillelagh missiles were fired onto an enemy. The PIP kit showed its effective in the Sheridan's time in the field, with no mechanical breakdowns at all in contrast to its time in Vietnam.[1]

In September 1996, with the disbandment of the 3/73 Armor, the Sheridan's combat career came to an end. The mocked up Sheridans at the Mojave training grounds stayed around until 2004 when they were replaced with mocked up M113's and Abrams. The Sheridans were retired without any replacement in the airborne tank role. Though attempts had been made in the late 1990's for a replacement, the Army decided that an airborne tank was simply not worth the cost for a specialized vehicle.[1]