Difference between revisions of "Jagdpanzer 38(t)" 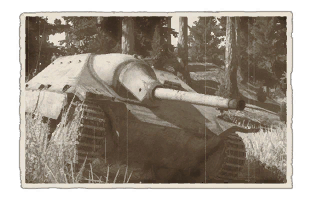 The Jagdpanzer 38(t) (also known by misnomer "Hetzer" [Baiter]) is a rank III German tank destroyer with a battle rating of 4.7 (AB) and 4.3 (RB/SB). It was one of the first vehicles introduced in the opening of "Ground Forces" in Update 1.41 after the Closed Beta Test. The Jagdpanzer 38(t) presents itself as a low profile tank destroyer with a powerful main gun that could keep itself hidden and annihilate the enemy as they come, yet with an impressive front armour that could withstand an average amount of incoming enemy fire.

Don't bother trying to crack through the front armour of the Jagdpanzer 38(t) unless in possession of a very good gun and ammo. Specifications list the front armour as 60 mm thick, but sloped at a 60 degree angle causes it to become 120 mm in effectiveness, quite thick for the battle rating it is in. Try to flank it to the sides or the rear and even in a heavily sloped format, there will be a likely chance the 75 mm shells will penetrate due to how thin the side and rear armour are (20 mm and 10 mm respectively). If unable to reach the side of the Jagdpanzer 38(t), an artillery or aerial strike could harass the Jagdpanzer 38(t) out of its comfort zone and even potentially disable it.

If there are no other choice but to go against it up front, there are some weak spots in the front area. Starting from the smallest, there are some sweet spots around the gun mount area where a lucky shell might penetrate, but these are very unlikely so only aim for these in the worst case scenario. The driver vision port is a tempting target on the front, not only is it a weak spot, but behind that are the driver, gunner, and commander! If one shot gets through here cleanly, there is a very high chance of making a shot cause a crew knockout. The last weak point, and also the largest, is the lower glacis area on the vehicle. The lower glacis only has an effective armour thickness of 80 mm compared to the front glacis sloping armour of 120 mm, making it easier to penetrate for even weaker guns. 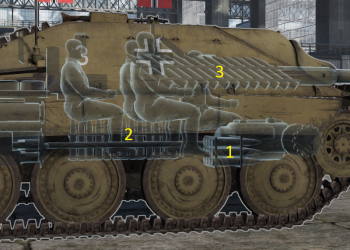 Ammo racks of the Jagdpanzer 38(t).

The Jadgpanzer 38(t) Tank Destroyer is armed with a 75 mm Pak 39 cannon, making it quite capable of taking out enemy armour at its battle rating. Use its speed -- up to 42 km/h (26 mph) -- to take up sniping positions while the enemy is still deploying. Keep the distance while engaging, as this allows the Jagdpanzer 38(t) to get more mileage out of its thin but heavily sloped armour on the small size. Watch out for aircraft and artillery.

The Jagdpanzer 38(t)'s front armour is thick, but be wary of its weak armour (which is pretty much everywhere else). The top and bottom of the Jagdpanzer 38(t) are exceptionally thin, making it very vulnerable to aircraft, artillery fire, and explosive rounds on the bottom. The side and rear armour are also very thin, so any exposure of those towards the enemy is sure to end with the Jagdpanzer 38(t) as a flaming hulk. While the front armour is thick, weaknesses on upper frontal glacis is the driver's vision port, some small spots around the gun mount, and the lower glacis. The driver's vision port and gun mount spots are tiny and so only a lucky round would be able to reliably hit these areas, but make sure to try and conceal as much of the lower glacis plate as possible as it is easier to penetrate.

As with any vehicle, research Parts and FPE modifications first to prevent any early knock-outs from fire or disabled systems. After these two, try to upgrade the vehicle's mobility and firepower, and aim towards the PzGr 40 shell, this will give a real edge in combat. Don't use the Hl.Gr 38B HEAT round as it doesn't give enough penetration, but it can help against hull-breakable vehicles.

The development of what will be called the Jagdpanzer 38(t) started in 1944, made to be a more cost-effective tank destroyer compared to the newer Jagdpanther and Jagdtiger tank destroyers. The tank used the battle-tested Panzer 38(t) chassis (though with a modified suspension and better engine), giving it a reliable record compared to the heavier tanks of Germany. The tank destroyer featured a 60 mm thick front armour angled at 60 degrees, giving it a protection of about 120 mm thick, but the side armour of 20 mm at 40 degree was very vulnerable to any anti-tank fire, even from Soviet anti-tank rifles. It carried a crew of four and a powerful 75mm PaK 39 L/48 cannon. The Hetzer had enough punch to destroy most armoured vehicles it may have encountered during the war. It was also mounted with a 7.92x57mm MG34 remotely operated machine gun on the roof that was operated by the loader. Factories from Czech and Germany produced the Hetzer from April 1944 to May 1945. Approximately 2,287 were produced from 1944-45.

The Jagdpanzer 38(t) was efficient as a tank destroyer, well-protected due to the sloped armour, easily concealable with a low profile, and armed with a potent cannon. The Jagdpanzer 38(t) was the more common late-war tank destroyer Germany had in 1944, and proved itself as a reliable machine due using a proven tank design of the Panzer 38(t). The small profile of the Jagdpanzer 38(t) made it very easy to conceal, and this provided much of its lethality in ambushes. The drawbacks of the Jagdpanzer 38(t) was on the vehicle's fighting compartment, as it was extremely cramped. The gun had a small amount of traverse to the left side, due to the cannon's placement to the right. The side armour was very thin and vulnerable to any anti-tank weapon. Due to the cramped compartment, the commander sat separated from the rest of the crew, and also making escape from the vehicle difficult, as there were only 3 hatches.

The Jagdpanzer 38(t) proved itself a versatile tank destroyer platform in German service during World War II, as the Jagdpanzer 38(t) also was made into many variants of itself. In November 1944, Hitler ordered about 100 of these Jagdpanzer 38(t) to mount a flamethrower and named the Flammpanzer 38. An armour recovery vehicle variant of which 170 was made was called the Bergepanzer 38. There were many more mounting different weaponry, such as the 75 mm KwK 40 of the Panzer IV, 75 mm KwK 42 of the Panther's, one with the 105 mm howitzer, 150 mm sIG 33 infantry gun, twin 2 cm Flak, 75 mm K51 L/24 gun and such.

This SPG was developed by the Czechoslovakian company BMM on the chassis of the Pz.Kpfw.38(t) light tank between November, 1943 and January, 1944 as a less expensive and more easily mass-produced replacement for the StuG III assault gun. However, it was eventually reclassified as an antitank vehicle intended first and foremost for assignment to antitank infantry and cavalry divisions.

Serial production of the Jagdpanzer 38 began in April, 1944. The tank destroyers were actively used by German troops during the final stages of the war, primarily on the Soviet-German front. 75 Hetzers were also sent to Hungary between December, 1944 and January, 1945.

Skin and Camouflages for the Jagdpanzer 38(t) in Warthunder Live.