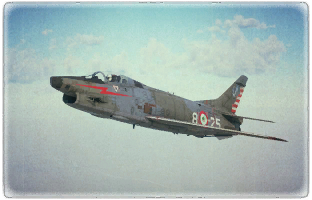 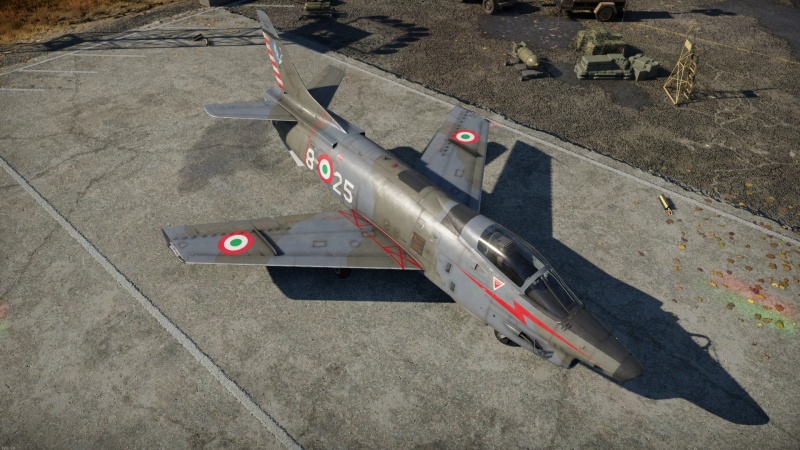 The G.91 Y is a rank VI Italian jet fighter with a battle rating of 9.3 (AB/RB/SB). It was introduced in Update "Drone Age".

The G.91 Y is a multi-role fighter made by Fiat. It was based largely on earlier Fiat G.91 fighters, the G.91 Y was a complete redesign but kept the basic shape of the G.91 series, this was mainly due to the fact that Fiat decided to start making the Y from the G.91T air frame. The biggest difference between the two types was the conversion from a single-engine to two General Electric J85 turbojets outfitted with afterburners. This conversion alone resulted in a 60% increase in the aircraft's thrust, however, it was not enough for this jet to become supersonic even when in a dive.

The G.91 Y can be outfitted with the following ordnance presets:

The G.91Y plays exactly like the G.91YS, the only main differences is the lack of a ballistic computer and air-to-air missiles. The G.91Y is capable of having a lot of power and energy potential, a great pilot will be able to learn its quirks relatively quickly and be able to use the aircraft's pros and cons to its advantage. The aircraft has great engines with afterburners however they aren't strong enough to allow you to go supersonic, so keep that in mind. Armament-wise, the aircraft is able to pretty much deal with anything it manages to get its cannons to hit, the 30 mm DEFAs aren't anything to scoff about. They're more than adequate to take planes down however getting to a plane whilst having to evade missiles and another aircraft at your battle rating might be extremely difficult for players who don't have the experience or lack situational awareness. The G.91Y retains the same suspended weapons as the YS, besides the lack of AIM-9Bs, the Y also has the capability of mounting 76 x FFAR Mighty Mouse rockets which provide the potential of low-altitude Boom & Zooming on trucks, anti-aircraft artillery, light tanks and even enemy fighters attempting an airfield capture, though this does not come without a cost. When dropping in low on ground targets, the fighter sacrifices its speed and manoeuvrability for that ordnance. The G.91 Y also can outfit a few bombs so the Y could also get the role of base bomber following up by attacking enemy fighters, but even still it isn't always reliable and can be easily intercepted from any other supersonic fighter jets patrolling the area. When it comes to ground close air support you will need to learn how to spot enemy AA and focus on taking them out and giving you and your team air superiority during the match. The Fiat G.91Y can take out enemy tanks with the bombs and rockets, however its best if you save them for stronger foes or a cluster of enemies especially due to the lack of a ballistic computer. Your main 30 mm armament is more than capable of taking out light vehicles such as M113s and BMPs. The cannons can be used instead for quick head-ons and to mop any remaining opponents at close-range.

The story of the Fiat G.91Y began during the late stages of the cold war. During the mid 1960s, Fiat decided to develop a new lightweight fighter-bomber, destined to replace the G.91R aircraft which at the time, would be in service inside of the Italian Air Force. They were also looking and studying the possibly to raise the interest in a possibile purchase of this new aircraft by other air forces who were looking to replace their G.91s. In addition, some requirements from the AM (Aeronautica Militare) needed the new aircraft to be capable of medium-range interdiction missions as a successor to the Italian F-84Fs which had been taken out of service. During the design stages Fiat decided to start and base the new aircraft from the previously made G.91T air frame. During development however the airframe underwent several different changes that in effect made the aircraft basically become a completely new machine. One of the main differences between the standard G.91 and the Y variant was the addition of two General Electric J85 afterburning engines, which was contrary to the preceding single-engine G.91. These engines allowed the Fiat G.91Y to nearly reach speeds of mach 1, although ultimately it remained a subsonic aircraft. The aircraft's fuselage and wings were also enlarged to accommodate 3 more fuel tanks (for a total capacity of 3200 liters), it also had bigger powerplant and a vastly improved flight and handling characteristics. The new G.91Y performed its maiden flight in December 1966. Testing revealed minor aerodynamic issues which would be resolved on subsequent production aircraft with only minor redesigns. In terms of armament, another thing the G.91Y improved on from the previous variant was in the form of armament. The G.91Y was equipped with x2 30mm Defa cannons which were installed unto the aircraft. For suspended armament the following was available for the G.91Y; Mk.82 and Mk.83 free-fall bombs, BL.755 cluster bombs, Orione pod, LAU-3A and LAU-18 rocket pods, Zuni rocket pods, 4 x AS-20s and 2 x air-to-ground AS-30L (Leger) Nords. Fiat had named the aircraft to G.91Y, probably to exploit the overwhelming positive image it had gained through previous G.91 users. After a few modifications and refinement of the design, the first 55 aircraft orders for the Italian Air Force would be completed by march of 1971 (out of a grand total of 67 aircraft eventually being delivered). The G.91Y served exclusively with Italian squadrons up until the early 1990s, before being replaced by the AMX Internatonal.