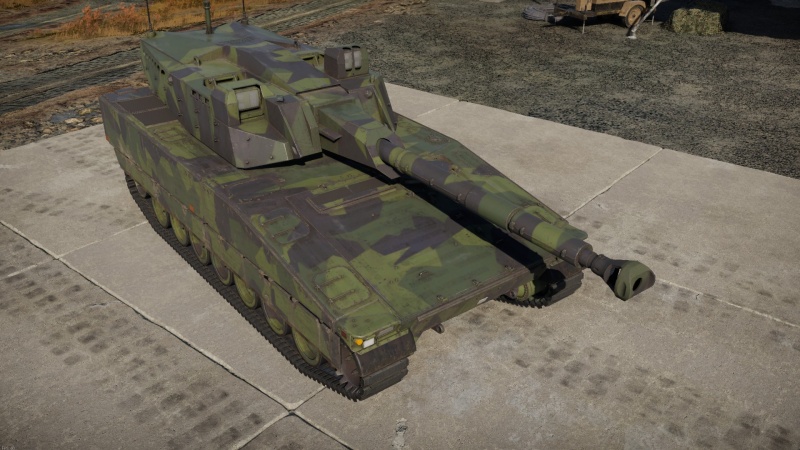 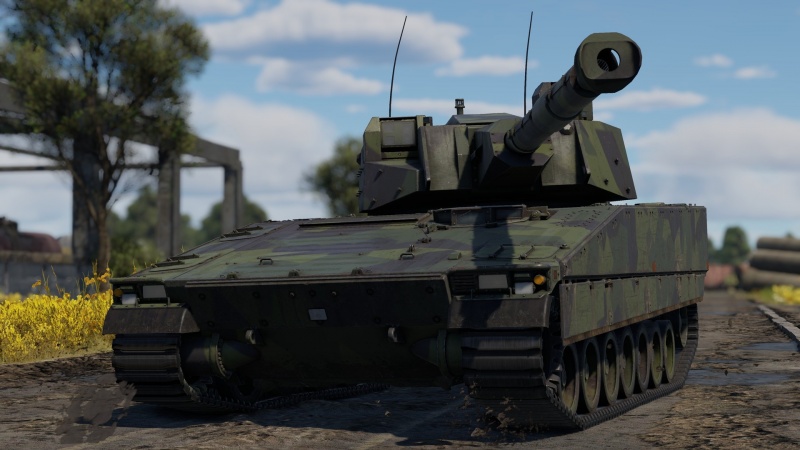 The Combat Vehicle 90105 XC-8 is a premium gift rank VI Swedish light tank with a battle rating of 9.3 (AB) and 9.7 (RB/SB). It was originally introduced as the "CV 90105 TML" in Update 1.97 "Viking Fury" with a Nexter low-profile turret and a similar 105 mm low-recoil cannon, but was almost completely remodelled in Update "Drone Age".

A variant of Swedish CV90 chassis with a Belgian Cockerill XC-8 105HP turret; both new buyers and previous owners of the CV 90105 TML will be pleased by the excellent reload rate and sufficient mobility to flank enemies.

The CV 90105 has 20 mm of frontal hull armour, which is not significant enough to stop anything larger than a 14.5 mm machine gun. But, the upper plate is angled very well and as such could possibly prevent low-penetration autocannons from damaging the vehicle; the hull front, with its slope, can offer from 20 mm on the lower glacis up to almost 90 mm of effective thickness on the upper glacis. The side armour is composed of two spaced plates, one 6 mm and one 10 mm plate (for a total of 16 mm). This is enough to stop low-calibre machine guns, but a .50 cal will penetrate the armour with ease. A fuel tank is located between the spaced armour plates of the left side of the hull, right beneath the turret; the fuel tank is able to absorb machine gun bullets, protecting the turret crew from the left side from machine gun fire. The rear of the hull has a surprising 20 mm of armour, enough to stop low-calibre machine guns.

With an excellent off-road mobility and a top speed of 70 km/h, the CV 90105 rivals even top tier MBTs, giving the XM-1, AMX-30 Super and Leopard A1A1 L/44 a run for their money. It is also quick to reverse, reaching -43 km/h and has very quick neutral steering. The acceleration is above average and the high hp/ton ratio enables the CV90105 to climb most hills and slopes.

However, the light tank has tendency to fishtail in corners and at high speeds due to the high hp/ton ratio. Even slight steering adjustments at high speeds can spin the vehicle out of control: anticipate your braking phases.

105 mm L/50 cannon
Two-plane stabilizer
Reduces the swing of the gun in two planes while moving
Autoloader
Automatically feeds projectiles into the breech. The speed does not depend on the skills of the loader
Ammunition40 rounds
First-order10 rounds
Reload5.0 s
Vertical guidance-10° / 42°
Main article: L/50 (105 mm) 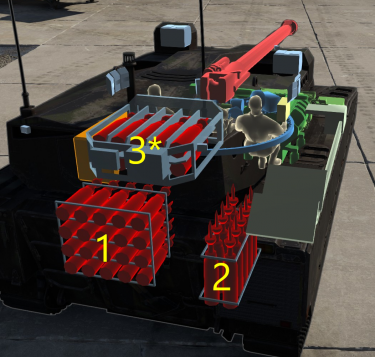 As for this tank's gun, the CV 90105 TML is armed with quite a powerful cannon that easily penetrates MBTs. It has access to both its stock APFSDS round, the DM23, and HESH and HEATFS shells. Although the stock shell has higher flat penetration, the DM23 outperforms it in angled penetration, which is the more important metric in most cases at this tier; most enemy armour will be well-angled. Still, it is useful to carry a few rounds of the stock APFSDS shell. The gun has a very good turret traverse speed which helps in situations where quick aiming is required.

The CV 90105 TML's greatest weakness is its poor survivability. It is only protected by thin armour on all sides. Due to the internal layout of the tank, ammo detonations and single-shot knock-outs are very common. Cannon-calibre rounds are able to penetrate the CV 90105 TML's armour, and artillery and aircraft post a serious threat to this tank. The CV 90105 TML has effectively no anti-air capabilities and its thin roof armour makes strafing attacks dangerous.

The Swedish company Hägglunds began development in 1983 on a combat vehicle capable of both anti-tank and anti-air defence, at the request of the Swedish Army. Due to the nature of the multi-role request, Hägglunds went for a utility vehicle design similar to the ideas of the Swedish Air Force. Initial trials were done with 5 different chassis to determine optimal engineering solutions to the concept. Although the design was unified, trials showed several issues with the clutch and brake systems. This was solved by reconstructing the system altogether. To accompany this, the chassis was raised 35 mm, and tower placement was moved forward. Hägglunds were strictly against this decision but later stated that this adjustment contributed significantly to the great export success of the vehicle.

In 2014, Hägglunds (now merged into BAE Systems AB) and CMI defense showed a new light tank based on the previous CV90 series chassis with Cockerill's XC-8 105HP turret. As well as the capability to be up-gunned to a 120 mm cannon, the new XC-8 turret featured new FCS as well as sporting an autoloader located behind the turret.[1]