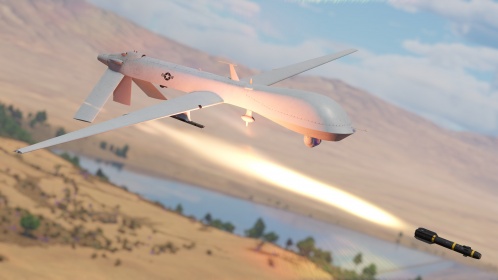 Drones were introduced into War Thunder in Update "Drone Age" as an additional vehicle available in ground battles.

With their introduction in Update "Drone Age", drones are now an available asset for ground combat players to make use of in battle. Drones come in two classes, Scout Drones and Strike Drones.

Introduction into the game

The first iteration of drones, specifically the scout drones used by light tanks, was introduced back in War Thunder 2021 April Fool's Event "Warfare 2077". The drones were launchable by the event "Hydra" rocket tank, and was useful for reconnaissance and as a loiter munition as the April Fool's version is configured with a shaped charge warhead to damage armoured targets. The current scout drones released in Update "Drone Age", sharing the same model as the Warfare 2077 event, lacks the loiter munition capability against ground targets and is a simple reconnaissance drone. 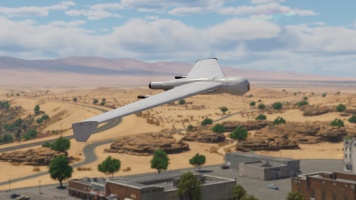 A scout drone in the air.

Scout drones can be launched in the middle of the battle and flown across the arena, with the ability to swap between controlling the drone and light tank. In case the scout drone is shot down, in RB light tanks can "reload" the scout drones on captured points, in AB they passively get a new one after about 3 minutes.

In RB, it is recommended to use scout drones with means to communicate with teammates as the scout drone cannot independently scout the enemy. As such, scout drones are a greater asset to players in squads, especially with voice chat. If using the scout drone with squadmates with no voice chat, one method to quickly mark individual targets for the squad to be aware of is to use the control [Set target for squad] to mark the precise location where the enemy has been located. In case there are no squadmates nor teammates to quickly communicate to and it is way too difficult to approximate the enemy position on a map, one way to signal the location of the enemy is to fly the scout drone obnoxiously close, over the enemy's location. While this leaves the scout drone at greater risk of being destroyed, it is a method to notify nearby team members, and since the scout drones do not cost points to spawn they can be used in this expendable manner.

In AB, the situation is completely different. The drone counts as an ally aircraft observing the entire battlefield, meaning that it will spot every enemy it can see and show them on the minimap via "radio communication" skill (assuming the allies are close enough to the enemy). This means that the scout tank can just launch-and-forget it whenever necessary as long as it does not fly directly into enemy tanks and this method is vastly superior to waiting for allied airstrikes to spy on enemies around the map, as there is no waiting and also no risk of being spotted on the map by hostile interceptors like before. Drones also greatly benefit the team, especially when planning to cross the hill or trying to weed out some campers, or merely as a way to warn someone too contentious to read the chat, as it will ruin the surprise for enemies up to 1 km range away from them. Unfortunately, the drone is equally visible in AB and, while it is borderline unhittable, it might really trigger SPAA and tanks with proximity shells by just existing. Destroying the scout drone gives low SL and RP rewards, but also yields an airstrike point, meaning that most hostile SAM tanks or even other light tanks or SPG with HE-VT can harvest drones to launch bombers or even to get a nuke, should the entire enemy team just launch drones all the time. Use them when it is necessary to account for all possible enemies or got stuck in the middle of nowhere with a bunch of enemy snipers around, not just as a throwaway device. 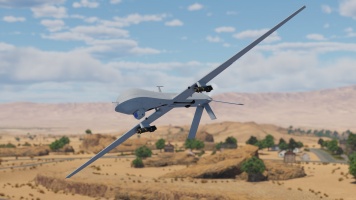 Strike drones are larger drones that can be equipped with air-to-surface guided missiles. Strike drones are able to be spawned in ground battles upon earning 750 spawn points, with additional cost depending on the available payload.

Strike drones contain up to two missiles that can be expended onto targets down below before the drone needs to reload back at the airfield. However, while strike drones spawn at a high-altitude and are relatively small targets compared to manned aircraft, they are not very fast nor manoeuvrable and can be easy targets for fighter aircraft and SPAAs that spots them.

A list of strike drones and their individual pages for more details can be found in the table below:

The Shooting Range #321 - Tactics & Strategy section at 06:40 discusses the addition of drones.
How to Drone - Zenturion7