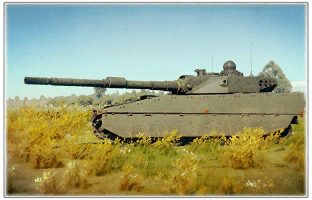 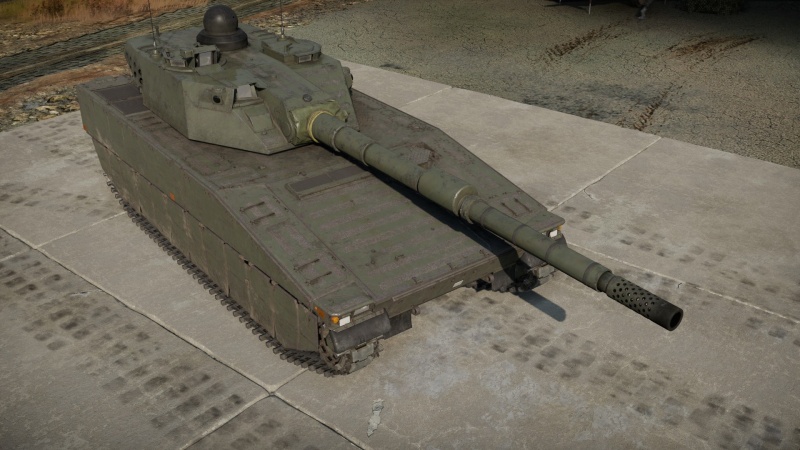 The CV 90120 combines the Combat Vehicle 90's chassis with a new turret with a 120 mm CTG cannon. As a result, armour is barely present and can only withstand heavy machine gun from the front. Even autocannons can penetrate its turret and 12.7 mm machine guns can cut clean through its side armour. Also be aware, your main goal should be to not receive any enemy fire.

Despite beating other top-tier vehicles with incredible mobility, the CV 90120 achieves comparatively fast speeds on all types of terrain, even when stock. This makes it a lot easier to grind the vehicle, as most priority goes into getting the powerful m/95 round. The CV 90120 reaches speeds of just around 50 km/h quite often, and finds little to no trouble manoeuvring. Another upside is the gearbox, which allows the CV 90120 to move almost equally as fast in reverse. The vehicle is fast, and due to the lack of add-on-armour compared to the prior Strf 9040C, the CV 90120 is actually lighter than the 40 mm variant before it. In addition, it gets an upgraded DI16 engine with 120 more horsepower, which results in improved power and torque. Although not comparable to tanks such as the Strv 121 in terms of acceleration, the CV 90120 can definitively stand its own ground in poor conditions.

120 mm CTG cannon
Two-plane stabilizer
Reduces the swing of the gun in two planes while moving
Autoloader
Automatically feeds projectiles into the breech. The speed does not depend on the skills of the loader
Ammunition45 rounds
First-order12 rounds
Reload5.0 s
Vertical guidance-8° / 22°
Main article: CTG (120 mm) 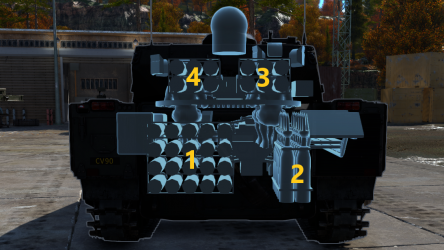 The CV 90120 has minimal armour only meant to withstand small arms fire and indirect shrapnel. Despite this, it's rather versatile due to its mobility, reload, and the powerful slpprj m/95 round. Your playstyle can make use of the autoloader, the m/95 round, 3rd gen thermals, and LWS (laser warning system) to snipe at long ranges (along with the added benefit of the CV 90120's mobility to reposition or get to sniping spots quicker), or you can make aggressive flanks to utilize the 5-second reload and take out or disable enemies before they can even react. Try to stay away from the frontline as your armour is effectively useless no matter the range. Its incredible reverse speed and acceleration will always make it easy to dip in and out of cover, retreat when damaged, or to simply reposition yourself, and with its autoloader, you can afford to lose a crewmember (during a firefight) while retaining all combat efficiency. With the slpprj m/95 round, you can penetrate almost all vehicle in the game from the front at any range (excluding areas such as the turret cheeks on the Leopard 2A5 series and M1A2, and some areas of Russian MBTs). The stock shell is a HEAT-FS shell and the DM23 APFSDS round is a tier I modification. Although entirely usable, it is subpar compared to m/95 round, but holds its own against tanks at its BR until a better round is available. You will just have to play more passively and know how to hit weak spots at longer ranges. Use your mobility to flank on large maps such as Maginot Line and (if you have them researched) use your powerful thermal optics to acquire and destroy a target. If the enemy is looking at you and you are too close, reposition and try to make them lose focus on you. By playing more to your strengths and keeping your weaknesses in mind more than you would a normal MBT, you can make the most of this vehicle.

With a reload of 5 seconds, it shares a quick reload with the aced Challenger 2 and the aced 105 mm Abrams, beating the Leclerc and any other tank's aced crew. Only the Type 90 and Type 10 beat its reload. This means that if you get the first shot off, and either their return shot misses or you disable their cannon, you can quickly take them out before they have a chance to fire again. Once spaded, it packs an insane amount of firepower for a light tank, dishing out 600 mm of penetration downrange every five seconds, and can cripple distracted players.

The CV 90120 has the commander sight feature with a powerful zoom (24x). With the laser rangefinder and thermals, this enables players to swiftly acquire and fire at enemy players and thus enhances the CV 90120's potential in long-range engagements.

After the CV 90105 TML project, Hägglunds began their own private venture to develop the light tank of the future. Working from their CV 90 chassis, they began tinkering with the Swiss Ordnance 120 mm Smoothbore cannon, to achieve MBT grade firepower. The design principle behind the project was that the vehicle wouldn't require armour if it had the capability to destroy targets before being fired upon. The tank was revealed in the summer of 1998 at the EUROSATORY defence exhibition in Paris. This version was a prototype however, as it took Hägglunds 3 more years to finalize the design. The vehicle would be known as the CV 90120, and is one of the most passionate projects launched by Hägglunds. 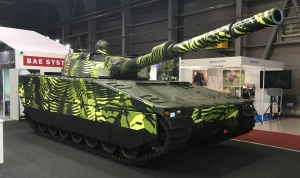 The CV 90120 is incredibly light for its weaponry, coming in at just below 20 tonnes excluding the weaponry. The challenge when designing the tank was transferring the recoil from a gun that size, into the chassis, without damaging the tank. The gun was specifically modified and picked for this problem. the CTG (Compact Tank Gun) 120/L50 Smoothbore managed to solve this issue thanks to the lightweight design and strong structure. The gun is semi auto-loaded from the rear of the turret, with reserve ammunition stored in the rear of the chassis, which was previously used as troop transport in the prior CV 90. Later variants, such as the CV 90120-T, the variant reflected in game, would see novel features such as generation 3 thermal imaging, along with smoke grenades, and commanders thermals provided by SAAB.

Hägglunds was bought by Alvis Ltd. in 1997, and later by BAE Systems in 2004. Despite this, the project has continued development. The latest version was revealed in 2011, known as the CV 90120 Ghost. This version is still being worked on, despite lacking any sort of customers. No matter the fate of the vehicle, Hägglunds seem convinced that the future of tank combat isn't survivability, but rather visibility. The CV 90120 Ghost has side-skirts capable of adapting its thermal imaging to look like something else, and the chassis is shaped to reflect radar signature. Hägglunds has made it perfectly clear what their vision on the future is, and along with the Polish PL-01 based on the same chassis, the vehicle remains a concept waiting to prove itself right.