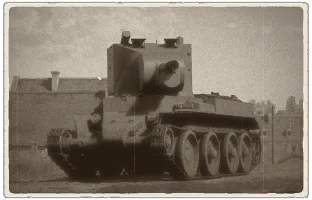 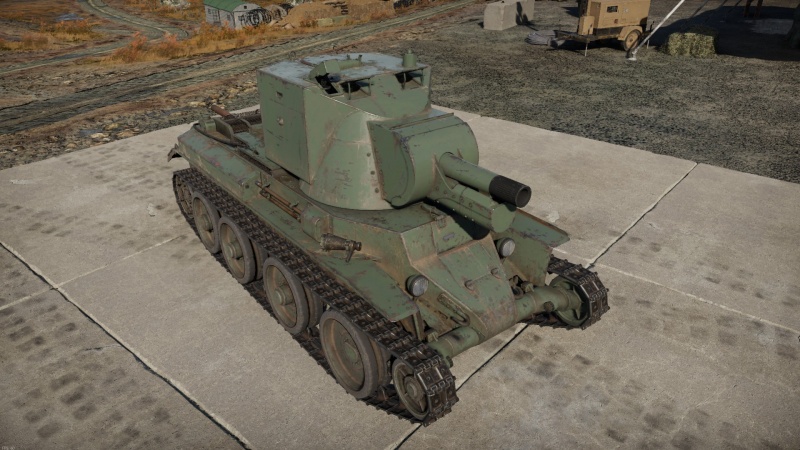 Perhaps one of the most iconic light tanks in Finnish service as well as being a "meme" tank among players due to its screen time in the Japanese animation film "Girls und Panzer"; this captured BT-7 modified with a huge QF 4.5 inch howitzer will strike fear into enemies with its fearsome firepower while still retaining the iconic fast and nimble playstyle of a BT light tank.

When only looking at the hull alone, the BT-42 is exactly like any other BT-7 tank; but what makes it stand out among its "ancestors" is the turret - the Finnish upgraded its gun with a British QF 4.5-inch (114 mm) howitzer and installed it inside a new welded turret that somewhat resembles the infamous KV-2 from the Soviet Union. But the common feature of BT tanks still persists on the BT-42, namely its poor protection; other than the mantle, any high-calibre machine gun will have no trouble penetrating its armor even at longer ranges, especially its hull. So be extra careful on where to appear in uptier battles where HMGs such as the M2HB start to be common.

The Finnish didn't upgrade the BT-42's powerplant as it was deemed sufficient, so it retained the same Mikulin M-17T engine and transmission. Players of the Soviet BT tanks should be well familiar with its excellent mobility at its rank, which lets the BT-42 flank its enemies with ease.

The most iconic feature of the BT-42 is the QF 4.5-inch howitzer from Great Britain (named "114 mm Psv.H/18" in Finnish service); although the revised turret that fits this very gun turns even slower than the original BT-7. If aimed properly, it can even hit tanks behind cover due to having the ballistics of a howitzer.

The stock akr 32/41 round is an HE shell, although its velocity at barely supersonic makes it unsuitable for hitting mobile targets at distance; but thanks to its 2 kg of explosives, if it hits the roof armour of tanks or spots that will cause overpressure, it can make sure the crew will be knocked out right away, let alone a near-miss to truck-based SPAAs at its rank with minimal protection; alternatively, the curve ballistic also means bad news for enemies who took cover at longer ranges- there are still chances of being hit in the roof.

The only researchable round, hkr 42/C is a HEAT round; while it can functionally replace the stock shell and penetrates up to 115 mm of armour at any given range. The HEAT has very few spalling against heavier targets, so make sure to hit the ammunition racks of enemy vehicles.

Although the name "BT" still exists on the BT-42, the only thing left of a BT tank is the chassis itself; the biggest difference is the huge turret, some might even compare it to a KV-2 as they shared some similarities in terms of the angular shape. While some might think the Finnish installed a medium-calibre cannon, upon closer inspection, they will know that it is not a good idea running into the QF 4.5-inch howitzer at 114 mm; although having only HE or HEAT at its disposal and barely having supersonic muzzle velocity, a precise hit on overpressure weakspot or even a near miss from the HE shell will very likely knock down the target right away, while having more explosive content than HE, HEAT is more suitable for direct hits on heavy targets such as the infamous B1 series or KV series at higher tiers. Thanks to the excellent mobility of the BT chassis, it can make sure that it would arrive at vantage points at the first place, alternatively flanking enemies from their sides and places they didn't expect. Its 13 second base reload time does give the BT-42 extra time to take out crippled targets as vehicles at this tier with even larger calibre takes up to 20 seconds for the next shot. For those who didn't finish off unprotected targets in one take, the bad news is BT-42 doesn't comes with any co-axial machine guns so do make sure your shot blows the target up into pieces, else you might become the prey instead.

Mobility is the best friend of the BT-42 and it still trades protection for its speed, showing up in front of tanks with HMG or autocannons will make the BT-42 meet its miserable demise as well; due to the fact that it has a huge howitzer onboard, avoid rushing into enemies or fire before a full stop, the imbalance of the turret does affect the center of gravity and makes severe "wobbling"; a miss means at least 13 second reload and this will give enemies some time to fight back.

The BT series light tanks have been the cornerstone of the Red Army in the late 1930s and have been used extensively between the Interwar Period and WWII; while it has been supplied to some countries including China and Spain, some quantities of them were also captured by the Axis and their allies, one of them was Finland.

During the Winter War and the subsequent Continuation War, the Finnish captured some quantities of BT tanks (2/5/7) series from the Red Army where some of these tanks became the composition of Finland's armoured platoons, one of them is known as the "Christie Detachment" from the use of mostly Christie suspension-equipped BT tanks; while the tanks gained some infamy within the army due to its reliability, but the demand for assault gun battalions ("Panssaritykkipataljoona") for their armoured units with 3 guns per platoon and the some numbers of repair-pending BT-7s led Finnish came up with an unique hybrid between BT tanks and military-aid British QF 4.5-inch howitzer: the assault gun that's commonly known as BT-42, or 15 tonnin rynnäkkötykkipanssarivaunu BT-42 (15-ton assault gun tank BT-42). After some developments especially on the turret design, the gun was first seen in September 1942 and was finally delivered to different battalions from February 1943 with 18 of them in total; after the game-changing Battle of Viipuri (the site is now a part of Russia Federation after the Moscow Armistice) for the Soviet Union in July 1944, 9 of these BT-42s were lost during the battle and the remaining 8 were pending for scrapping.[1]

But one of these 8 BT-42s, numbered R-708/Ps. 511-8 was saved for display and being the sole surviving example of this interesting conversion of BT tanks, now displayed at the Parola Tank Museum ("Panssarimuseo") alongside with dozens of captured/purchased tanks.