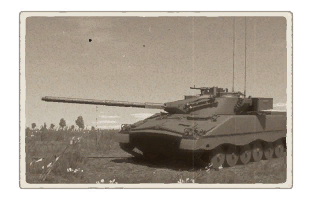 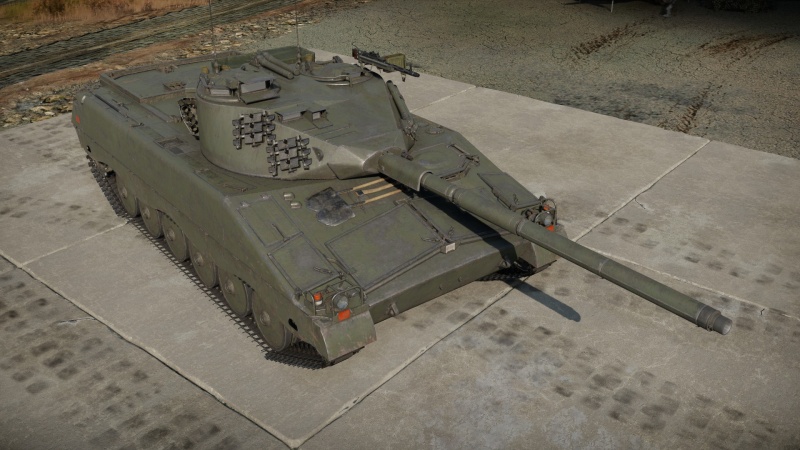 As one would expect from a light tank, the Ikv 91 is very weakly armoured. The armour, both on the front and sides, protects from small arms (like British 7.92 mms for example) and most splash damage. However, while the front hull also protects against .50 cals, the turret can be penetrated by them, which can quickly lead to death as 3 out of the 4 crew members are in the turret.

Although the commander can fire the weapon instead of a gunner, this rarely matters in any direct fight as they sit next to eachother and are both hit together. When they aren't hit, the gun is usually destroyed, often leaving the tank with only retreat as an option.

The engine and transmission are located in the rear hull, meaning that shots to the front hull are unlikely to destroy them, and shots to the rear hull are less likely to deal fatal damage as the engine and transmission will absorb most of the explosive damage, while the crew is not close enough to be hurt by the shrapnel. This does not help against pure kinetic shells whatsoever. It is ill-adviced to use engine as a shield until parts are researched, as even field repair fails to start the engine back up again and the tank literally cannot move after being disabled.

The tank rarely catches fire and usually expires before this happens. The only common source of fire is a failed airstrike that hits the engine too many times.

The tank also has 3 groups of modern aerosol smoke (usually only acquired at rank VI), these immediately explode midair and conceal the tank within 2 seconds instead of 5 or more. The implication is that they can be used to immediately separate opponents and in any position, particularly in AB, where the tank has stronger scouting (letting it to see enemy tanks through its own smoke wall). Some opponents with long reload also prefer to leave rather than fight an undamaged Ikv 91 inside its own smokes.

The Ikv 91 has for main armament a 90 mm gun able to use two shells: HEAT-FS and HE. All shells are unlocked from the beginning, even the excellent HEAT-FS with 400 mm of penetration and a whole 655 g TNT equivalent of explosive mass. The turret traverse speed is not the best (18.8°/s in RB/SB and 35.4°/s in AB while the American M41A1 Walker Bulldog gets 33.3°/s in RB/SB and 63.7°/s in AB), particularly when compared to future light tanks, but is above average at its BR and with upgrades is usually enough. The same goes for targeting the gun up or down.

Unfortunately, the gun also shakes a lot upon any change in movement direction, almost to an uncontrollable degree, which makes it extremely unreliable on sudden encounters, especially over uneven terrain. It is also inherently inaccurate even with all the upgrades and sometimes manages to miss the mark even with the laser rangefinder, particularly when trying to fire immediately before the gun stopped completely.

The slow speed of both HEAT-FS and HE is offset by the laser rangefinder - a device on a whole level above normal rangefinders (which are also very rare at the BR), which allows the tank to automatically zero the gun scope on the target in RB, or to make shot predictions from any range in AB, making the Ikv 91 effective at long-range engagements too. It is also possible to use it from commander scope as well, which reduces the possibility of getting shot back to almost zero. 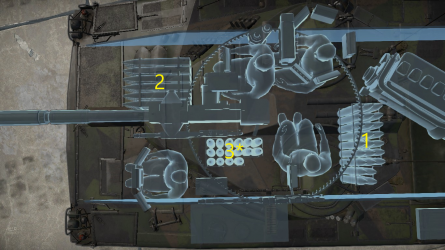 Ammo racks of the Ikv 91

A maximum of 59 shells for the main gun can be carried, although the high-effectiveness of the HEAT shells gives the possibility for players to only carry a fraction of that and still be able to take out several targets in one run. The first-stage ammo stowage is comprised of 16 shells all located next to the loader, the next 18 shells are located in the front hull next to the driver, and the last 25 shells are located between the loader and the engine.

The Ikv 91 comes with two 8 mm machine guns: A pintle-mounted machine gun and a coaxial machine gun next to the main gun. The machine guns have a relatively slow fire-rate but are still effective at taking out exposed crew members of enemy vehicles.

Thanks to its excellent HEAT-FS shell, the Ikv 91 can engage any target, even when up-tiered. However, a margin of caution is still needed when going against tanks that have .50 cals, as .50 cals can go through the sides and turret to then kill the gunner, loader and commander. The good mobility makes it able to go from one objective to another very quickly. The laser rangefinder also gives it the possibility to quickly make accurate long-range shots. The -10° depression also allows it to take firing positions that some other tanks cannot (particularly the Russians that usually only have -5°).

The Infanterikanonvagn 91, or Ikv 91, was a Cold War era design made in Sweden. Although it is practically a light tank, it was designed as an infantry support vehicle, similar in role to the Russian PT-76. It was designed by Hägglunds, and ordered by the Swedish military. Hägglunds had previously designed the Pbv 302, an armoured personnel carrier. When designing the Ikv 91, Hägglunds used many parts from the Pbv 302, in order to reduce costs and increase parts commonality. The design featured a lightweight, lightly-armoured hull. The armament consisted of a 90 mm gun mounted in a turret. Secondary armament consisted of two low-calibre machine guns. The vehicle was powered by a Volvo Penta model TD 120 A diesel engine producing 330 hp. One of the requirements for the design was amphibious capability, a necessity in certain parts of Sweden. As such, it was amphibious with some preparation. The prototype was completed in 1969, but production wasn't authorized until 1975. 212 Ikv 91 were produced, and were given to infantry brigades, for use as tank destroyers. The Ikv 91 served until the early 2000s, replaced by newer designs such as the Strf 90 and Strv 121/Strv 122. In 1983, a prototype for an improved Ikv 91 model was created. This prototype mounted a 105 mm gun, instead of the 90 mm gun. It was marketed for export, but was never ordered It is often known as the Ikv 105.