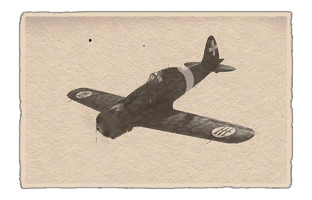 The C.200 Saetta serie 3 is a rank I Italian fighter with a battle rating of 1.7 (AB/RB/SB). It was introduced in Update 1.69 "Regia Aeronautica" along with the initial Italian aviation tree, but a variant existed in the German tech tree prior to the update.

For the guns, the same applies to all other Italian aircraft, generally you want to use Tracers, Anti-air or Stealth since they are the belts that deal the most damage. They suffer above 300 meters, so fire only at or below that range for the best effects. Furthermore, much like the other Italian fighters the armament is woefully inadequate to deal with bombers, hence it is best to avoid them entirely, or focus on taking out the engines. The only exceptions are the very early biplane bombers, such as Swordfish, Po-2 and the like.

It's recommended to climb as much as you can before engaging, a good 4,000 meters is important, as it can be used to get some extra speed when you need it.

In combat, the C.200 can engage in a wide array of moves. The decent energy retention and high speeds it can attain, about 800 km/h, before it begins to red-line, means it can be used for Boom & Zoom, or to get away. Furthermore it's a good turn-fighter, it out-turns a lot of planes it faces, notable exceptions being biplanes and Japanese aircraft. However, take care as the engine isn't the most powerful, and accelerating is problematic, so it's important to watch your speed carefully in combat. This becomes especially important since the engine is also quite prone to overheating when WEP is engaged, and it cools down slowly.

The M.C.200 is a pre-war Italian monoplane manufactured by the Macchi aircraft company, its name is derived from its chief designer, Mario Castoldi, designer of the famous M.39 and M.C.72 racing planes.

The M.C.200 was a design put forward for the Regia Aeronautica's Series 0 tender set in 1934, a specification for a modern mono-wing interceptor. Of the Italian aeronautical industry, three firms submitted a prototype, the G.50 by Fiat, the Re 2000 by Reggiane and the M.C 200 by Macchi. Of the three designs, the M.C 200 won the tender, being the fastest and most advanced aircraft, although it did have issues that needed fixing before it could enter service, most notable its issues with auto-rotation and sudden, violent stalls. For this reason, the Fiat G.50, while inferior to the M.C 200, was chosen for production as well, as it would be able to enter service on short notice, the G.50 went on and served in the Spanish civil war, and for a time, alongside the M.C.200, which started production a few months after its former competitor, in the summer of 1939. At the start of the war, 144 were in service.

The best fighter Italy had at the start of the war, it remained the top-of-the-line front-line Italian fighter until the arrival of the M.C. 202 in 1941. Used on all Italian fronts, it was agile and sturdy but slow and poorly armed. A total of 1,151 were built before July, 1942. It performed well in the Greek campaign against RAF Hurricanes, and also fought in Africa and Russia. The arrival of the M.C. 202 pushed the M.C. 200 to attack, escort and homeland interceptor roles. 52 were still in service when Italy surrendered.