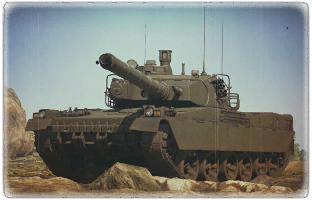 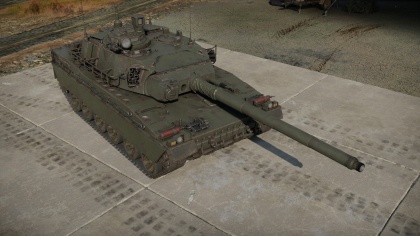 Ammo racks of the AMX-40

The 20 mm 20F2 coaxial autocannon is not just an anti-aircraft gun: with 57 mm penetration at flat angle, it will shred anything from armoured cars and SPAA to lightly armoured medium tanks' sides. In case a vehicle cannot be penetrated, use the autocannon to disable them before using your 120 mm cannon: target the gun barrel or the tracks. The 20 mm can also deal with low-flying aircraft with the extra 20 degrees of elevation. The only drawback is that the autocannon is coaxial, meaning the turret must rotate to track the targets.

The small calibre of the AAN-F1N machine gun makes it largely ineffective against all armoured vehicles but the ones with an open compartment. It still can be used to ping targets as a rangefinding help or to mow down minor obstacles blocking your line of sight.

The AMX-40 is one of the most mobile MBTs at its battle rating and has nice agility when traversing. Speed should be the main feature of combat, "Hit n' Run" should be used, engage to disable or destroy and escape as fast as you can, use smoke if needed.

Although not recommended due to the low armour, it can withstand some ATGMs and HEAT-FS as well as autocannons from IFV and SPAA. Stabilizer makes a huge upgrade to the tank as it can poke and shoot from corners without stopping at all, making engagements much more quicker than with AMX-30's. Composite armour will sometimes stop powerful rounds, do not expect to stop a round with this as it is not meant to stop high calibre APFSDS or even HEAT-FS. It will stop low calibre APFSDS (25 mm, 30 mm, 40 mm) at relative close ranges and anti tank grenades and rockets (PG-9).

Despite being an MBT, it can also be somewhat used as an IFV due to the 20 mm autocannon which can penetrate the sides of MBTs and/or destroy modules such as tracks, barrels or set engines on fire, sometimes firing the main gun is not even needed. Be aware that Soviet and Russian MBT's will stop penetration of your 20mm HVAP due to the side armour. When engaging them, focus on firing at tracks and barrels, use your main gun to destroy them.

The AMX-40 has pretty decent optics and thermal sight, with addition of OFL 120 G1 APFSDS, which make the AMX-40 suitable for sniping. Use your speed to your advantage and move once you destroy a target or two to keep you safe from potential revenge attacks with CAS, use smoke grenades to cover your escape or when you have been hit.

Development of the AMX-40 began as a private venture of the French GIAT company in the early 1980s, with the aim to create a new export vehicle, in anticipation of increased demand for military equipment from middle eastern countries. GIAT engineers decided to base the new vehicle off the AMX-32, which itself was an improved export version of the successful AMX-30 main battle tank. However, compared to his predecessors, the AMX-40 was to feature vastly improved firepower, mobility and protection. As a true first in the French postwar tank development history, the AMX-40 would receive a two-plane stabilizer for its 120mm smoothbore cannon. Although the tank's turret and cannon were mostly adopted from the AMX-32, increases in weight from new components led to the fact that the hull of the vehicle had to be redesigned from scratch.

In the late 1980s, the vehicle's development stagnated as active development was largely replaced with an active marketing campaign, in an effort to find a potential buyer for the new vehicle. Despite France's best efforts to market the vehicle, even going as far as showing off some of the prototypes in a competition in summer of 1986 in Saudi Arabia, a buyer couldn't be found. Spain was the only country showing some interest in potentially buying the AMX-40, but in the end, nothing came out of it either. By failing to find a buyer, domestic interest in the AMX-40 also faded and eventually resulted in the project being closed in 1990. Ultimately, the four constructed prototypes of the AMX-40 can only be considered as transitional designs, bridging the gap between the old second generation French MBTs, like the AMX-30 and the upcoming modern designs, such as the Leclerc.