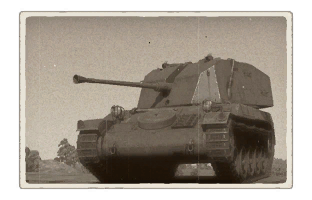 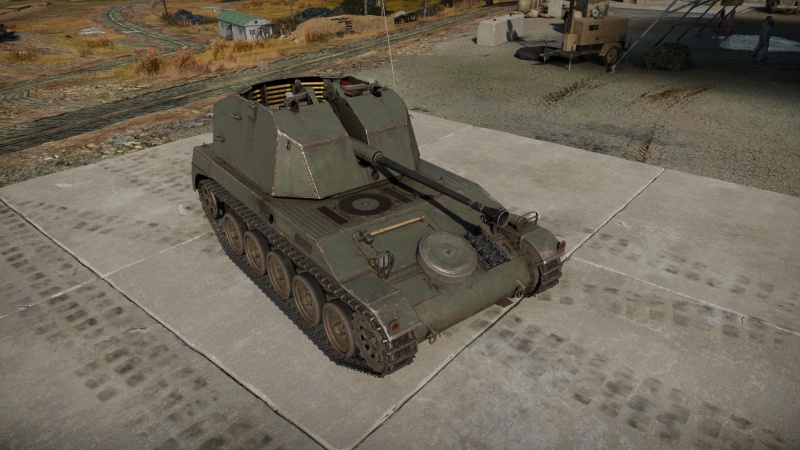 The AMX-13 DCA 40 (Atelier de Construction d'Issy-les-Moulineaux, char de 13 t, défense contre avions, canon de 40 mm: Issy-les-Moulineaux construction bureau, 13 ton tank, anti-air defense, 40 mm gun) is a Rank IV French self-propelled anti-aircraft gun with a battle rating of 4.7 (AB) and 4.3 (RB/SB). It was introduced in Update 1.75 "La Résistance". It is a clear improvement to its predecessor in all domains, combining two good things to make them even better: the AMX-13's chassis and an improved Bofors cannon (The 40 mm Mle 51 T1 cannon is a French version of the usual 40 mm Bofors AA gun).

An AMX-13 chassis, a classic of French post-war technology has been modified to fit SPAA role. This specific chassis has some variants over the usual ones : an enlarged turret ring and with it some extra storage boxes, both extend sideways over the tracks. This tank is quite recognizable for its large box-shaped turret over its chassis.

This tank has 20 mm of armour, all around, barely angled but for the UFP, this won't protect it from antitank rounds nor from autocannon fire but it can certainly deflect poorly-aimed HMG bursts, but not for too long. If taking too long bursts (or if the enemy gets too close), some bullets may find their way through the two large holes in the turret front, near the gun area (there is also two smaller holes in the turret's back). In sum, this tank's armour is not to be trusted, but it will save you from stray bullets and medium to long range MG/HMG fire.

French ground forces players should be used to the AMX-13 chassis as it is the basis for most French light tanks. With its turret being a little bit heavier and its engine 31 hp less powerful, this tank is slower than the usual AMX-13. It can still carry its user wherever it wants, as long as the situation does not require fast escape manoeuvres: with only -6 km/h backwards, it is difficult to quickly get out of an unwanted situation.

The gun is this vehicle's main appeal. Being twice as fast-firing as its predecessor makes it easier to get planes down, but you will still have to aim. As for engaging tanks, with up to 94 mm max penetration, you will start to struggle firing at most enemies since their frontal armour is strong enough to block incoming 40 mm rounds, though with some precision, medium tanks and even heavy tanks can fall victim to your gun. Lightly armoured tanks and SPAAs are easy targets with your 4-rounds bursts. 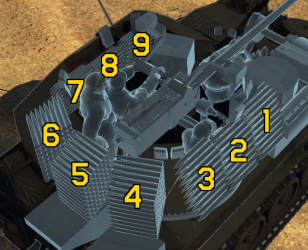 This SPAA is quite versatile as it can take down both tanks and planes with mitigated efficiency. It has an autocannon that does not fires fast enough to engage planes efficiently nor does it penetrates enough to shred tanks. As it is, this SPAA is good for front line use: providing cover for incoming ground attackers to its allies while also securing flanks from fast-movers.

Good at engaging both tanks and planes, its versatile belts allows this vehicle to switch roles in a split second. In the right hands, in a downtier, this SPAA is an absolute monster, easily capable of ace matches against tanks.

Pre-aim your gun in the predicted direction of your target: the DCA-40 has a bit of a slow turret traverse for an SPAA. It is easier to aim at targets coming towards you: stay with your team and fire when the plane is ~500 m away: an hitting round will shred it in no time. Any other SPAA tactics apply normally to this vehicle.

Do not engage tanks frontally: prefer lateral engagements, surprise your foes. If it happens that the enemy team is composed of medium/light tanks, there is a great chance that you can knock some of them out, but be sure to have an escape route as any tank noticing you counters those flanking manoeuvres. Heavy tanks at this BR are usually very hard to get trough, even from the side, engage at your own risk.

Even though your gun has SPAA - Level Penetration, It can go through pretty much any tank side that it faces. Even the Tiger II. And it's from this that the DCA 40 gets it's charm tactic:

Knowing this, you can win battles against Panthers, Tigers (I and II), and many tanks you might find in an uptier at medium range, even when taking this tank into a higher tier than it could face.

Taking out the gun is fairly easy, your center mounted bofors just needs to be aimed at the gun, and can take it out with 2 or 3 shots.

Once you've taken out the gun, go for the track or transmission. doing this will render any tank immobile for at least 20 seconds, which is more than enough.

93mm of penetration can go through almost any tank's side armour and rear armour in the game. With the exception of the Maus, of course, your gun can shred enemy tanks from the side. Knowing this

It's worth mentioning that in a downtier against axis powers, you can penetrate every vehicle you see from the front except for some German casemates. In an uptier, if you must engage a heavily-armoured tank from the front, several well placed shots to the cannon barrel will knock it out, and enable you to flank at your leisure and feast on their side armour. A more conservative way to play is to stay a few metres behind the front-line and spot flanking tanks while also watching the skies.

Main article: History of the AMX-13

The need for a SPAAG emerged in the 1950s for the French Army when the only AA vehicles left over from WW2 (M16 half-tracks mainly) became underpowered and thus obsolete. Several projects were launched using Bofors guns. Among them was the AMX-13 DCA canon de 40 mm using the hull of the AMX-13 on which was installed a specially designed SAMM S 980 turret housing the 40 mm Bofors L/70 gun. The turret offered good protection for the crew, 360° traverse and a 90° elevation angle. The Mle51 T1 gun fired 240 rounds per minute at 993 m/s.

The development of the SAMM S 980 turret was stopped in 1957 and the Bofors gun production stopped in 1958. The experience gathered from similar single-gun SPAAG projects put the stress on numerous shortcomings when compared to twin-gun designs.

The AMX-13 DCA 40 never saw service or combat action in the French Army.