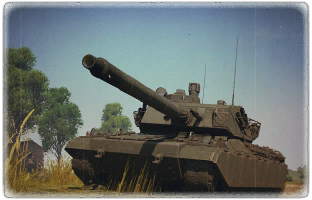 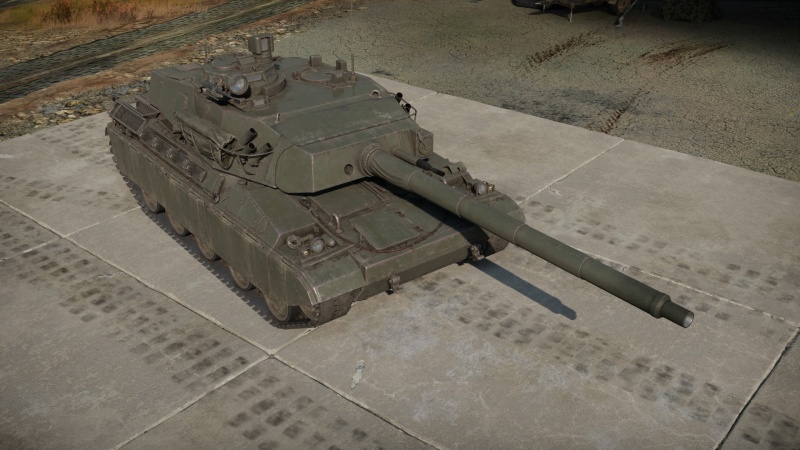 The AMX-32 is a rank VI French medium tank with a battle rating of 9.3 (AB/RB/SB). It was introduced in Update 1.97 "Viking Fury". An improved version of the AMX-30, it gets an upgraded gun, an upgraded engine, and spaced armour giving additional protection and advantages on the battlefield. There were several versions of the AMX-32 developed. This version represents the 1981 120 mm armed version with the retrofit of thermal imagery equipment which was proposed in 1985.

The AMX-32 is protected by spaced armour on the lower glacis (50 mm RHA, 100 mm air, 79 mm RHA) and the mantlet (25mm RHA, 140 mm air, 35 mm RHA), respectively. An improved version of the AMX-30, the tank was built for mobility, not armour. The spaced armour will prevent some spalling of HEAT shells and will nullify any HESH shells. The upper glacis plate is sloped at 81 degrees, meaning almost all incoming rounds will ricochet, often into the turret and damaging the breech and even the turret crew. Overall, in terms of armour, the AMX-32 has enough armour to absorb at most 2-4 shots before being knocked out. The spaced armour is useful in countering HESH and some HEAT shells, but its armour should never be relied on or overestimated.

The AMX-32 is powered by a Hispano-Suiza HS-110-2-SR engine rated at 800hp @ 2500RPM, with a transmission providing seven forward gears and two reverse gears, similar to the transmission from the AMX-30. Like the AMX-30, the AMX-32's top speed is 65 km/h (40 mph) forward, but the AMX-32 goes 3.9 km/h (2.4 mph) faster in reverse thanks to its upgraded engine. The AMX-32 was designed with mobility in mind, and it does just that. It is slower than the AMX-40, but still holds its ground against more sluggish tanks, especially British and Soviet vehicles at its BR. However, it should not be overestimated, as tanks such as the KPz-70 will outmatch your mobility anywhere. In an uptier, even more if not all tanks will outperform you in terms of mobility.

The AMX-32 is armed with the GIAT CN120-25 G1, the same 120 mm smoothbore gun found on the AMX-40. It also shares the same ammunition. The stock OCC 120 G1 is a HEAT warhead capable of penetrating 480 mm of non-angled RHA at any distance. At modification tier 4, the option to research the OFL 120 G1 becomes available. It is an APFSDS shell with 394 mm of penetration, giving plenty of kinetic power for its BR. The HEAT shell also holds its ground, and nearly always one-shots any vehicles that hull break, but be wary of your battle rating, as, at 9.3, up-tiers facing the top dogs at 10.3 are imminent. All tanks at that battle rating have excellent chemical protection, so side and gun breech shots may be your only option. The CN-120 is a great weapon for its BR, and its APFSDS can penetrate any tank in the game frontally if you have enough knowledge of weak spots and armour layout. 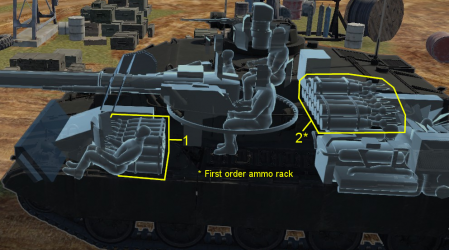 Ammo racks of the AMX-32

The CN120-25 G1 cannon fires single-piece ammunition from two stowages, the first order rack found in the rear of the turret, and the rack located in the hull front to the right of the driver. It takes the loader about 13 seconds to restock a round into the ready rack from the hull rack.

The 20F2 (French designation of M693) automatic cannon is mounted in tandem with the CN-120 in the turret mantlet. Players who have played the AMX-30 (1972) in Rank V will already know the capabilities of this weapon. Similarly to the Rh202 cannon found on the MBT/KPz-70, it excels at quickly taking out not only light tanks and SPAA, but also cannon barrels, a vital ability that gives the AMX-32 the upper hand in one-on-one combat. If the enemy tank fires at you and hits or misses, you are able to overextend, destroy the cannon barrel with the 20 mm, and safely engage the tank with your 120 mm. Lightly armoured tanks, IFVs, and anti-aircraft vehicles will be quickly taken care of by the 20F2.

The AMX-32 plays similarly to the AMX-30 in battles. It can be played effectively in ambushes, as a sniper (with its rangefinder and thermal optics), and use cover to the utmost advantage. With the gun stabilizer, you are able to poke out of cover, shoot, and retreat. This is especially useful when sniping, and using "leapfrog" tactics with a friendly vehicle. In the latter case, when the enemy shoots, move out of cover and take a shot, and if you want, use your 20 mm cannon to destroy their cannon barrel. Do not rely on your armour though, as most if not all shots WILL penetrate and make quick work of you. Players must make sure that they either make the enemy shoot and miss or get the first shot off on said enemy. This applies only in one-on-one combat if both the enemy and the AMX-32 see each other. If more than one tank is waiting for you, either retreat and make them come to you, try baiting or flanking, or get a friend to help. On the other hand, being able to shoot and then remove their main means of retaliating via the autocannon proves extremely useful, especially in an ambush. All in all, the AMX-32 is a very capable tank that can quickly return several enemies to the hangar without receiving major damage, if played right.

As soon as the AMX-30B entered service in 1966 it was clear that it would not be able to face the newly introduced Soviet T-64 tank and as a result would need to be replaced or dramatically improved over the course of its serviceable life. Therefore improvements had to be incorporated into the design to keep it competitive. Various development programs saw the light at the end of the 60's and all were ultimately meant to be incorporated into the AMX-30. These improvements had to improve the characteristics of the tank in the three main defining MBT traits: firepower, mobility, and armour, with the company GIAT being the project manager of all studies that were to be undertaken.

In the meantime, AMX-APX started a private project whose goal was to develop a new tank based on the AMX-30 to replace it until a French 3rd generation tank would be available. This tank was named AMX-32 and its development started in 1975 with the first prototype being ready in 1977. The tank at this time featured a rebuilt AMX-30 hull with spaced high hardness RHA armour at the front of the hull as well as new FCS control system named COTAC introduced 2 years earlier on the AMX-10RC coupled to a new electrohydraulic turret powering unit called ATS GS 32, a fully rotating stabilized panoramicsight with a 2nd generation light intensifier at the disposal of the commander called M527 designed by the SFIM, a semi automatic gearbox ENC200 minerva with torque converter, and a DI VT 13 2nd generation light intensifying camera. The new tank was also capable of firing on the move thanks to the M527 commander panoramic sights whose stabilized mirror gyroscopes were able to send inputs to the tank gun servos thus stabilizing it on both axis when the commander used its priority controls over the turret.

AMX-APX tried to sell this new tank to the French Army but the price was found to be prohibitive for what was thought to be replaced in less than 10 years... Therefore it was decided that the project should be solely dedicated to the export market. GIAT was not satisfied with the first version of the tank. If it had to attract foreign customers, this tank could not afford to be just a more expensive French Leopard 1A4 clone which already had a very good reputation and could be acquired for a fairly low price. It was decided that the AMX-32 had to become the best 2.5 generation MBT if it was to have a chance to be sold.

Therefore GIAT ordered that new improvements had to be made, especially in the protection and firepower department, so they assigned the EFAB to the design of a larger, better protected turret capable of housing the soon to become CN120-25 L/52 120 mm smoothbore cannon originally intended for the EPC program (Engin Principal de Combat/Main Combat Vehicle program eventually resulting in the AMX Leclerc). In less than 2 years the turret was ready as well as a new turret for the more basic 105 mm gun. These two turrets had similar layouts and protection levels, only the gun mantlet as well as the position of the night vision device were different, and were both showcased at SATORY 1981, the 120 mm version was also proposed with a boosted HS 110-2-SR developping 800 HP in order to keep the HP/ton ratio around 20. The two versions of the tank attracted a lot of interest but ultimately, no orders were ever placed. Despite probably being the best modernized second generation tank of its time, the niche market of modernized 2nd generation MBT was simply too tight for this tank to fit with modernized Leopard 1's and M60's monopolizing said market. GIAT tried once again with the AMX-40, this time being a completely new tank which was better protected and much more mobile, rivaling M1's and Leopard 2's in mobility and firepower. However it encountered no more success than the AMX-32. The AMX-32 was proposed for the last time on the export market in 1985 before being replaced by the AMX-40 until 1990.

Despite the tank failing to attract customers, a lot of what was put into it was used to modernize the AMX-30 which would become the AMX-30B2 as well as in the EPC program, most notably in the FCS department.

Retrospectively, the French Army made a mistake by not buying this tank at all as well as the AMX-40. The EPC program came much later than expected, leaving them with totally obsolete tanks in the late 80's, and it is possible that the refusal to adopt the tank domestically further harmed the little chance it had of appealing to foreign customers. That being said, this tank represents a real milestone in French tank development history.

Development of the AMX-32 began in 1975 as a private venture of AMX, in hopes of attracting the interest of foreign customers, which are already using the AMX-30. The new vehicle was intended to offer better protection than the base model, in addition to several other improvements in various areas in order to spark the interest of international customers.

The first prototype of the AMX-32, fitted with a 105mm gun, was unveiled in 1979, followed soon after by the presentation of the second prototype in 1981, armed with a 120mm cannon. However, despite the improvements offered over the base model, the AMX-32 attracted no interest from neither foreign customers nor from the French military, the latter of which more favored the notion of modernizing its existing fleet of AMX-30s, rather than procuring a new vehicle.

After only a handful of prototypes were built, further development was soon afterwards cancelled due to lacking interest. However, although the AMX-32 never became a success itself, many of the features that it incorporated and experiences gained during its construction were carried over the subsequent projects, such as the AMX-40 and modernization projects of its predecessor - the AMX-30.