The GIAT Industries 20 mm F2 (otherwise known as M693) is a dual feed autocannon which fires the standard 20x139 mm munitions. It is a gas operated autocannon that has three firing modes, those being single shot, burst and safe. The gas system of the weapon operates via two vents on either side of the barrel, through which the gases push against the two pistons. While firing, the two pistons are pushed back, moving the struts backwards so that the breech block can move to the rear. In this way, all the firing forces are developed along the barrel centerline which maximizes accuracy.

The 20F2 shoots bullets that can pierce up to 57 mm of armour. This makes the 20F2 autocannons adequate enough to pierce trough most light vehicles with relative ease. However, if the angle is steep enough, the 20 mm bullets will just bounce and won't even scratch the enemy target, such as the BMP-2's front armor. If one does not have a HEAT round loaded and fears that an APFSDS round might not cut it, they can resort to using their 20F2 to dispatch the light vehicle, as the 20 mm bullets have good spalling and will annihilate light vehicles within short bursts.

If one is dueling an MBT, the 20F2 can make short work of the hostile's cannon or tracks, rendering them unable to fight. If you are in a close quarters scenario or your main cannon is disabled, you can also try to penetrate the back armour, which in most cases leads to setting them ablaze if a fuel tank or the engine is struck, such as the Leopard 1.

The design of the M693 is based on the earlier 20 mm M621 autocannon. The main difference between the M693 and the M621 is, that the M693 differs in firing the more powerful 20 x 139 mm round and having a dual belt feed mechanism. The M621 main emphasis was lightness, while the M693 emphasis was just pure firepower. It entered service in the 1970's but the development began somewhere late 1960's. It was produced by the Groupement industriel des armements terrestres (otherwise known as GIAT). Thousands of these autocannons were produced.

Sometime in the 1980s, the companies Direction des Constructions Navales (otherwise known as DCN) and GIAT were contracted to design the F2 20 mm cannon, which was basically the navalised version of the M693 that the French Army used and sold to export.

The navalised F2 20 mm cannons are used to this day by the French Navy. 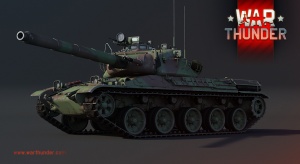 AMX-30 with its 20F2 attached in the mantlet