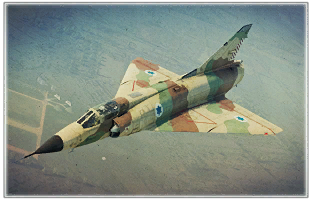 The Mirage IIICJ Shahak is a rank VII Israeli jet fighter with a battle rating of 10.0 (AB/RB/SB). It was introduced in Update "Winged Lions".

Due to the size of the Mirage IIICJ, its survivability is rather low. The large engine that covers almost half the length of your fuselage is very vulnerable to enemy fire. Any damage which will significantly decrease your power output and the massive wings will lose a large amount of lift when damaged.

The plane includes an RWR (radar warning receiver), which can be rather helpful.

The Mirage IIICJ is armed with:

The Mirage IIICJ can be outfitted with the following ordnance presets:

In Air RB, it is recommended to climb and use your decent radar and Matra R530 SARH missiles against unsuspecting aircraft (such as Harriers, A-5C, F-5C, MiG-21S and more). The R530 missile has pretty good range and can hit opponents coming head-on even when launched from the maximum range (~12 km or 7.5 mi at ~5 km or ~3 mi altitude or more) while also being agile enough to hit targets that try to manoeuvre at higher altitudes.

The aircraft also comes with the Matra R530E which is the infrared variant of the R530. It can be used at medium range at high altitude (preferable side-on) but it will be a missile that you rarely use since you have access to two AIM-9D missiles that are superior to the 530E. The R530E could then be traded for bombs or the regular R530 which also has all-aspect capabilities.

There is also the Shafrir 2 IR missile which, despite featuring a caged seeker head, has great manoeuvrability as well as a long motor burn time. However, the missile has a relatively short range, and has difficulty hitting targets going the same speed as you at low altitude.

The AIM-9D is one of the longest-range missiles of the AIM-9 family, featuring a motor and aerodynamics almost identical to the AIM-9G/9H with an inferior seeker head and gimbal limits. It can effectively destroy aircraft 5-6 km rear aspect at ~5 km, ~3 mi altitude or more with the only drawback being that it is angled downwards with a caged seeker before launch making it slightly harder to use.

The aircraft itself features a powerful engine and a delta wing configuration which allow it to accelerate at a decent rate and have great maneuverability but the control surfaces become less responsive at higher altitudes.

In summary, a valid tactic is to start climbing at 20-25 degrees once you take off until you reach an altitude where your missiles can use their full range at the start of the battle, use your radar to lock on an enemy and fire your R530 missiles hopefully scoring a kill while avoiding sharp turns and doing your best to keep your speed high. Having high speed not only makes it harder for enemies to catch up to you or use their missiles to hit you, it also makes your missiles have an even longer range. Once you see that there are no more enemies at your altitude, there are most likely either a few running people on the enemy team left or there is a furball. In both cases you have the ability to sneak up on the enemy from your higher altitude and fire your missiles off scoring even more kills. One thing to keep in mind though is that the AIM-9D pulls too much lead when fired off from side-aspect so it will be easier to dodge.