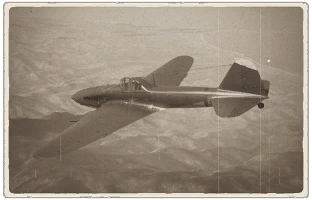 The IL-2 is an attacker which excels at low altitude. You'll be flying close to the ground in order to hit your targets with your cannons and machine guns, so watch for obstacles and use the IL-2's phenomenal low-speed performance and tight turning circle to get out of harm's way, though beware of the mediocre roll rate and the weak acceleration. Give yourself time to build up a good amount of speed before going for another attack, otherwise, you'll struggle to climb away. Make note of what targets you can eliminate: light pillboxes can be destroyed by your cannons, and even extended MG fire from your 7.62 mm guns, but other pillboxes will be impossible to destroy with your guns, and bombs will need a direct hit. Likewise, light tanks and armoured cars are destroyable with your guns, but medium tanks will need to be hit from the top or rear to penetrate the thicker armour, and heavy tanks are invulnerable unless you land a direct bomb or rocket hit.

The armoured cockpit keeps your pilot safe from harm, and while your engine does have a tendency to take damage, you should still be safe from anti-aircraft artillery unless you're exposed to it for too long. The biggest threat posed to the IL-2 is enemy fighters since you're slower and less manoeuvrable than any fighter at this rank. Unlike the later Sturmovik models, you lack any form of defensive armament, so once an interceptor is on you, typically your outlook is grim. Keep an eye on the movement of enemy fighters and use terrain to hide your movements to and from targets if you can. Once intercepted, make use of the IL-2's slow speed to force overshoots, and use the adequate turning capabilities to dodge fire and get around the fighters. If you have a shot, take it: the 23mm cannons will shred even large heavy fighters with ease.