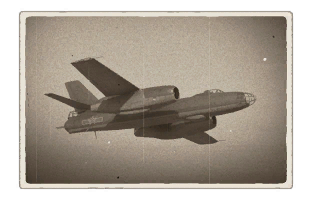 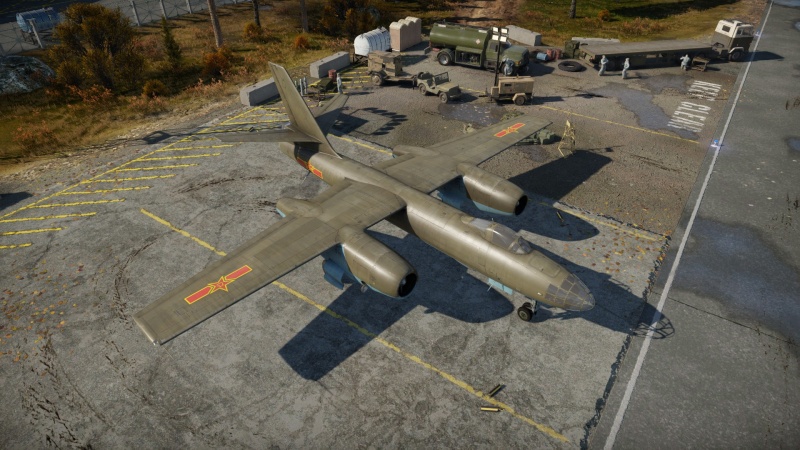 The H-5 can be outfitted with the following ordnance:

The H-5 is an extremely versatile aircraft, thanks to its extensive suspended ordnance options. The aircraft can be used as a bomber, or as a CAS aircraft with its bombs. As well, the H-5 gets access to a powerful forward-firing and defensive set of 23 mm cannons.

Due to its impressive low-altitude manoeuvring capabilities (for a medium bomber), the H-5 can be utilized in a variety of roles. In all game modes, if a teammate is struggling to evade an assailant, the H-5 may be able to provide the supporting fire with its dual 23 mm cannons. The aircraft is hampered in this role partly because of its mediocre roll rate and low ammunition count for its forward-firing cannons. If its bomb load is expended, the H-5 is also a very capable "gunship", or a bomber aircraft whose role is to attract, distract, and destroy enemy aircraft. Other aircraft that can perform this role include the G8N1 Renzan, IL-10 (1946), B-29 Superfortress, and B-24D Liberator, among others.

The H-5 can be used as a base-bomber in RB. This is initially difficult due to its small stock load of twelve 100 kg bombs, but becomes much easier once the 3,000 kg bomb is unlocked. This monster of a bomb is the second-largest bomb in the game, after the Pe-8's FAB-5000 bomb. This bomb can one-shot bases very easily. When used in this manner, proceed to the nearest base as fast as possible (possibly in a slight dive), drop ordnance, and run. This ensures that the H-5 won't be intercepted by any fighters, which will take more time to get there. Attempting to climb may not be the best option, as many enemy fighters can get to bomber altitude very quickly.

The second, and more interesting option for the H-5 is ground attack. The aircraft can carry a variety of powerful ground-attack ordnance (namely the aforementioned 3,000 kg bomb), which make the aircraft extremely effective in mixed battles. When used in this manner, it is worth noting that the aircraft is much more vulnerable, especially in air battles where enemy fighters will arrive extremely quickly. The first effective load for ground attack is the aforementioned 3,000 kg bomb; despite only having a single drop, the bomb is effective enough to take out every enemy tank at a base. This option also ensures the safety of the aircraft, as you will be able to escape quickly after dropping the bomb.

The H-5 shouldn't be used in an air-to-air role, as it will be outmanoeuvred and outspeeded by most fighters at its BR. If being pursued, employ evasive manoeuvres, and utilize the H-5's powerful tail gun to shoot at pursuing fighters. The tail turret, packing two NR-23 autocannons, is especially effective, and can easily destroy pursuing attackers. As well, the H-5 can encounter early missiles such as the AIM-9B. If an enemy fires a missile at you, wait until the missile gets close, then perform a sharp manoeuvre. The early missile's weak seeker and G-force capability prevents it from tracking reliably. 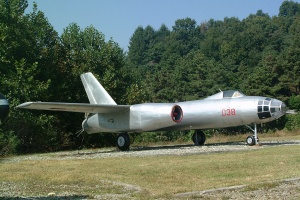 The Harbin H-5 was the Chinese-produced version of the IL-28 'Beagle', a Soviet-designed light bomber used by a variety of countries in the Soviet Bloc.[1] Initially entering service in 1967,[2] the aircraft had several changes compared to the original IL-28 including redesigns of the wing and tail structure. Multiple variants of the H-5 were developed, including nuclear weapon carriers, electronic warfare aircraft and reconnaissance aircraft.[2] The last bomber-variant H-5s were retired in the early 1990s, though it is speculated that some airframes are still in use today in secondary duties.[1]

In the 1950s, China received several IL-28 'Beagle' jet bombers from the Soviet Union. These aircraft proved to be highly useful, and were used against the Taiwanese in the First Taiwan crisis of 1954-55.[1] However, the Soviets did not give the Chinese a license for production. As a result, the Chinese government ordered the Harbin aircraft production plant to produce the IL-28 without a license, based on existing Chinese IL-28 aircraft. The aircraft featured numerous changes, the most notable being a redesign of the wing and tail structural panels.[1] As well, later H-5 aircraft were equipped with a modernised turret carrying two AM-23 autocannons with a greatly improved fire rate, though this feature is not included in-game.[1]

The production of the H-5 was hampered by the cultural revolution, and though an initial prototype flew in 1962,[2] mass production didn't commence until the late 1960s. After entering service, the H-5 became a primary frontline bomber of the PLAAF.

The Harbin H-5 entered full-scale production in mid-1967,[1] and began entering service with PLAAF bomber units. However, it had become relatively obsolete by the time it entered service, mainly due to its lack of advanced avionics which effectively limited it to daylight missions. Nevertheless, a range of H-5 models were developed. This included the H-5A, a variant of the H-5 designed specifically to carry nuclear weapons.[1] This variant would drop a nuclear bomb during a test, in 1968. Other variants include the HZ-5 reconnaissance variant, HD-5 electronic warfare variant, and the HJ-5 bomber trainer.[1][2]

The H-5 was used extensively by Chinese frontline units and was retired from frontline service in 1990, well after the retirement of the Soviet IL-28.[1] There are reports of H-5 variants still in service, but the official PLAAF consensus is that the H-5 was completely retired by 1990. As well, the H-5 was used in a successful defection attempt, by a Chinese captain who flew his airplane to Taiwan.[1] This aircraft was the first operational IL-28 type aircraft recovered by the west.[1]