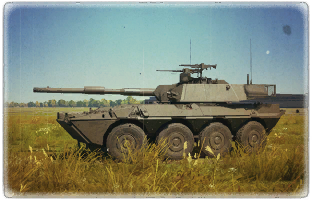 The armour of the Centauro MGS is the same as the previous Centauros, mediocre against everything but calibres smaller than 14.5 mm HMG fire. It has additional armour plates which give it decent armour protection to artillery fire and fragmentation as well as autocannons. However, it is still prone to hullbreak. The lack of armour is however compensated by adopting a playstyle based on the increased mobility to position your vehicle in unexpected spots. This is what the Centauros excel at. Fast speed, manoeuvrability and relatively small profile helps it disguise, move and stay under cover at almost all times.

The Centauro MGS has access to the powerful 120 mm OTO Melara 120/45 smoothbore cannon, the same cannon mounted on the Ariete MBT. It has the same handling as it utilizes the same ammunition and has the same ballistic performance.

The Centauro MGS has access to a wide variety of ammunition which are the deadliest at the game, specially the CL3143.

Ammo racks of the Centauro MGS

The Centauro MGS should be played as the rest as the Centauros but not quite. Speed, firepower and low profile should be used to perform flanking manoeuvres, get quickly into sniping positions and surprise the enemy.