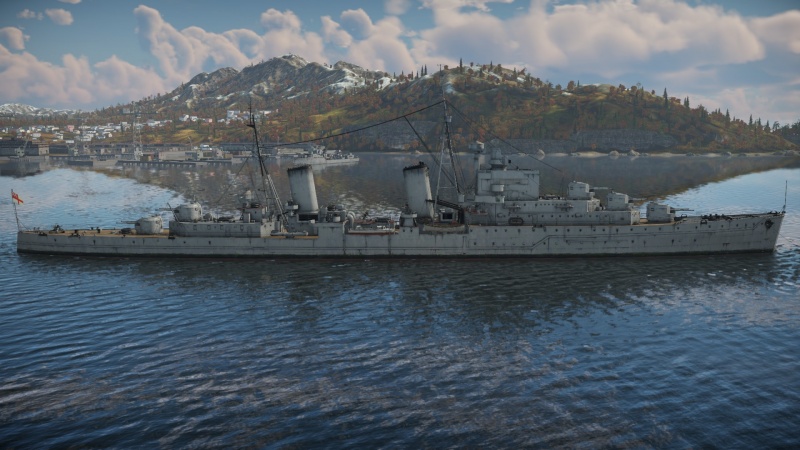 One of the first British cruisers (alongside HMS Enterprise), HMS Dido is a Dido-class anti-aircraft light cruiser armed with 5.25-inch dual-purpose guns instead of the more usual light cruiser armament of 6-inch guns. She is similar in design concept to the USS Atlanta.

The Dido's hull features 76 mm of rolled homogeneous armour (RHA) plating over the sides of the machinery spaces with 25 mm of RHA covering the ends and the machinery deck. This plating covers the boilers and the parts of propeller shafts that are above the waterline. The steering gear is protected by 25.4 mm RHA plating all around. The main gun turrets and barbettes are also protected by 25.4 mm RHA, as is helm located in the central shaft leading down from the bridge.

The rest of the hull is entirely unprotected by anything other than the standard 25 mm steel plating of light cruisers. The bridge, in particular, is open and quite vulnerable to getting disabled by even destroyers.

There is also 12.7 mm hardened armour plating facing the front of the 20 mm Oerlikon mounts.

The Dido's mobility is rather standard for a light cruiser. She is not quite as fast or as nimble as the Enterprise, but her mobility is adequate for most needs.

The Dido's primary armament consists of ten QF 5.25-inch dual-purpose guns. These are most comparable to the 5"/38 guns carried by most American destroyers and the USS Atlanta. The 5.25-inch gun's rate-of-fire is much lower (10 rounds/minute vs. 22 rounds/minute), firing generally heavier shells.

All of the main gun turrets are capable of full 360° traverse and elevating up to 70°, allowing them to engage aircraft effectively. They also have a relatively fast traverse rate compared to other light cruisers, although a bit on the slow side for engaging aircraft.

The ammunition types available consist of HE, SAP, and HE-VT. HE-VT is broadly superior to standard HE, especially against aircraft. Despite the heavier shells, both contain less explosive filler than the HE shells of the American 5"/38. The SAP is superior to the Common shells of the American 5"/38, having better penetration and more explosive filler. It is capable of penetrating light cruisers, and even heavy cruisers at close range.

The Dido's designated secondary armament is the two quadruple 2-pdr 'pom-pom' guns mounted amidships. These are primarily anti-aircraft guns, although they can be effective against lighter targets such as destroyers and coastal craft at close ranges.

The Dido's designated anti-aircraft armament consists of five single 20 mm Oerlikon mounts. These are lethal against coastal craft and aircraft that dare to approach within range.

The Dido is armed with two triple 21-inch torpedo tubes located next to the aft funnel, one on each side of the ship. Unlike on British destroyers, these torpedo tubes have wide traverse arcs. They are armed with the Mk. IX torpedo, which has a powerful 340 kg TNT warhead and long range (9.67 km) even without the torpedo modification.

The Dido's unusual main gun battery makes her very specialised as an anti-aircraft and anti-destroyer ship. She is very well protected against destroyer guns, and in return, a single salvo from her ten 5.25-inch guns will inflict a great deal of damage to them.

Conversely, the Dido will struggle against even light cruisers at medium to long ranges, having to rely on whittling down the crews using fires and HE. At close range, her SAP is effective against light cruisers, and the high rate-of-fire compared to cruiser 6-inch guns can be used to disable and then overwhelm them. However, the Dido's armour can be penetrated relatively easily by the 6-inch guns of most light cruisers, so engaging in straight-up trading fights will usually result in taking extensive damage, even if the Dido emerges victorious. The Dido is mostly helpless against heavy cruisers and battleships other than getting close enough to torpedo them.

Once the HE-VT shells have been unlocked, the 5.25-inch gun is quite effective against aircraft, though the relatively low rate-of-fire makes it less than ideal in the role compared to other true dual-purpose guns such as the British 4.5-inch or the American 5"/38 guns. The 'pom-poms' and 20 mm Oerlikons mostly function as back-up to the main guns. They should not be relied upon to shoot down aircraft except at close ranges.

Because of her weight distribution and narrow hull, Dido rolls rather dramatically in turns, leaning towards the outer side of the turning circle. It might prove detrimental in close range combat, as guns can't depress enough to fire at anything inside ~4 km range on the raised side (assuming full speed ahead, max rudder deflection). 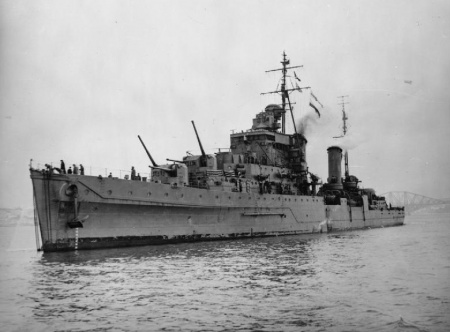 HMS Dido (37) was a British AA cruiser and the lead ship of her class, a series of 16 ships built in the late 1930s to the early 1940s. Designed for fleet air defence, the ships were armed with a 5.25-inch (133 mm) main battery capable of engaging both ships and naval vessels. Dido was commissioned in 1940 and deployed to the Mediterranean, serving there for the large part of the Second World War. She later deployed to the Arctic, and in 1945 accepted the surrender of the Kriegsmarine. Dido was present at the Coronation review of 1953 as the flagship of the Reserve fleet, and was scrapped in 1957.

Following the four ships of the Arethusa class, the British navy decided to construct a new class of light cruiser for anti-aircraft duties - the Dido class. Displacing 6850 tons on full load, the ships were small even for a light cruiser. Their armour was also scarce, the main belt being just 3 inches (76 mm) thick. The Dido's main armament comprised 10 5.25-inch (133 mm) guns in five dual-purpose turrets, which served as the primary anti-ship and anti-aircraft armament. Her anti-aircraft armament was initially weak (quite surprising given her role), composed of three quad pom-poms and five single Oerlikon cannons; this was improved over the course of the Second World War. Dido was initially laid down in 1937, and was commissioned by 1940.