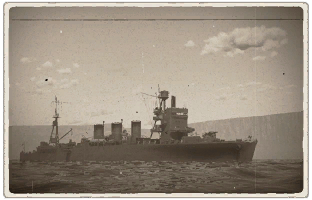 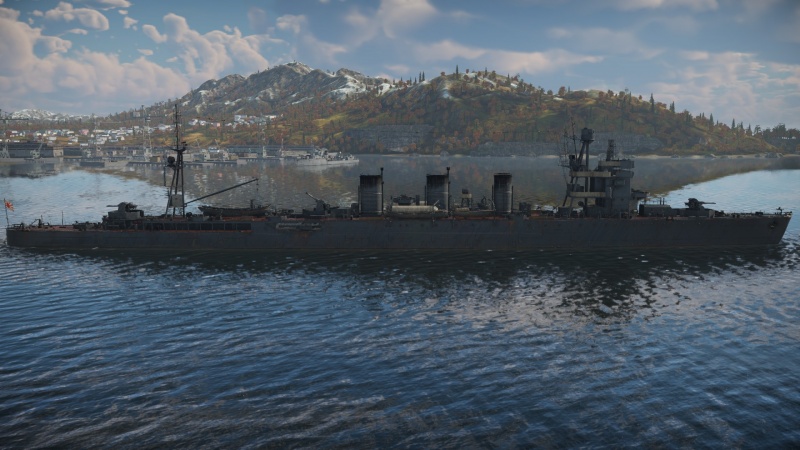 The Nagara-class, IJN Isuzu, 1944 (五十鈴, namesake: Isuzu River) is a rank III Japanese light cruiser with a battle rating of 5.0 (AB/RB/SB). It was introduced in Update "Ixwa Strike".

The IJN Isuzu is in her 1944 refit, with the sole purpose of acting as a floating anti-aircraft platform in an attempt to counter the United States' air superiority and slow down their advance. To achieve this, her 140 mm guns were replaced with a 127 mm anti-air cannons, as well as a staggering 50 x 25 mm Type 96 anti-air cannons. Giving her an unparalleled anti-air capabilities for her rank in exchange of anti-ship firepower.

Even when compared to the infamous Omaha-class cruisers such as the USS Trenton, the IJN Isuzu's protection is easily one of the worst among the range of cruisers in the game. Most of the Isuzu armour were concentrated around the engines, which were a double-layered RHA with 38 mm thickness for the outer layer and 25 mm for the inner layer. This armour can shield off the blast of HE shells, but will not protect her engines from SAP or AP shells.

As her crew compartments is mostly located on the first deck without protection, and as she has a large number of AA mounts, the Isuzu will lose a considerable amount of her crew with a few HE salvos. The ship's low crew count of 510 sailors will not help her to withstand enemy fire for long.

With her low displacement, the IJN Isuzu is very fast and agile for a light cruiser. This will be important for the Isuzu's survival as you have to manoeuvre a lot to evade incoming fire.

Isuzu's main armament consists of 6 x 5 inch (12.7 cm) cannons mounted in 3 turrets. They have no protection so they can be easily knocked out. There are 2 types of shells avaible: HE and HE-TF (time-fused). While HE shells aren't as effective against ships as the previous ship's (IJN Akizuki), time fuse shells can easily destroy enemy planes, especially when they are diving. In combination with the secondary armament, this ship excels in anti-aircraft fire. Fire rate isn't quick, but it is enough to aim a few shells at air targets.

As an anti-air cruiser, the Isuzu is equipped with 50 x 25 mm Type 96 AA cannons placed all over the ship, a large amount of AA guns of a Japanese ship (only behind the Tone with 62 AA guns). The sheer amount of the guns give the Isuzu a massive burst output that will deter any aerial threats from getting close.

The only capable anti-ship weaponry the Isuzu have at her disposal is eight Type 93 Model 1 "Long Lance" torpedoes launched from quadruple launchers on each side of the ship. As the previous ship in the line, the Yugumo, demonstrated its potential, these fast and deadly torpedoes need no further introduction. Although the Isuzu carries only half of the "Long Lance" of the Yugumo and is therefore less effective at long-range anti-ship duties.

Due to her disproportional main and secondary/anti-air armament, the Isuzu is essentially an oversized destroyer in term of playstyle. The Isuzu's six 127 mm guns are reasonably effective against most destroyer she will usually face, but is inadequate against anything larger than that. Thus, the Isuzu perform best as an escort ship, providing supplementary and anti-air support for friendly ship, while the Long Lance torpedoes can help the Isuzu to sink some enemy ships.