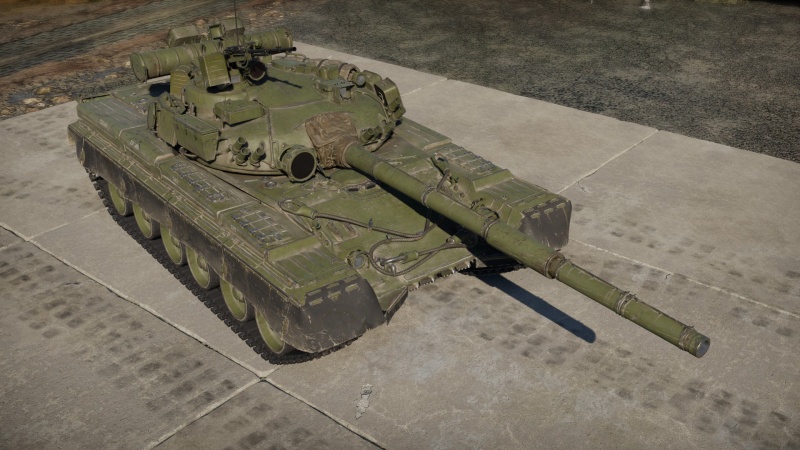 The T-80B is visually similar to the T-64B, it retains the same rounded turret, sloped frontal armour and skirted sides, as well as the same jacketed 125 mm smoothbore gun. The turret bears different kit, however, such as the use of rounded storage bins and a snorkel tube. The same NSVT 12 mm machine gun is fitted, but this time it is used with 150-round boxes instead of the 100-round boxes found on the T-64B. The T-80B retains the same rubber-mesh screens covering the upper portion of the tracks. The frontal glacis has an additional 30 mm plate of HHRA welded onto it. This replaces the regular V-shaped "splash plate" found on the T-64B. The primary difference between the T-80B and its predecessor is the significantly improved engine which offers increased mobility.

The T-80B encounters the same weaknesses and strengths as the T-64 line does - extremely strong turret cheeks, an average upper front glacis with a large weak spot around the driver's port, and a lack of composite on the lower front plate. It's also vulnerable to the same incoming fire as the T-64B - turret shots will often disable the gun breech; penetrating shots on the hull will often detonate the ammunition in the carousel.

As with the T-64B, the T-80B is best used in hull-down positions where only the turret is exposed - and unlike the T-64B, it has an acceptable reverse speed for utilising cover.

The T-80B has a turbine engine which produces significantly more power than the T-64B's diesel - top speed and manoeuvrability are both improved thanks to this but the most significant change is the acceleration - the T-80B is able to achieve reasonable speeds both off- and on-road and maintain them much better than the T-64B. More importantly, the reverse speed is nearly doubled from the measly -4 km/h on the T-64B to -7 km/h - still not ideal but a big improvement.

Thanks to the improvements, the T-80B is a much better match for the Abrams/Challenger/Leopard series - it's still not the fastest but it's a much closer race.

125 mm 2A46M-1 cannon
Two-plane stabilizer
Reduces the swing of the gun in two planes while moving
Autoloader
Automatically feeds projectiles into the breech. The speed does not depend on the skills of the loader
Ammunition38 rounds
First-order28 rounds
Reload7.1 s
Vertical guidance-5° / 15°
Main article: 2A46M-1 (125 mm) 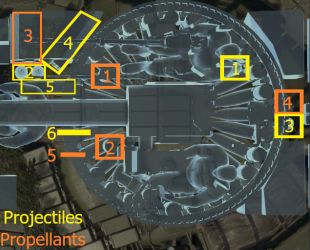 The T-80B main ammo rack consists of a mechanized carousel at the bottom of the turret. Such ammo stowage carries 28 propellants and projectiles. Notes:

Make sure to always keep your front facing the enemy, when any top BR vehicle gets a glance at your side the round will penetrate through the fairly weak side armour and have a good chance at hitting your ammo rack or your engine which will result in a loss of the vehicle or a critical hit to the vehicle's powerplant. The T-80B has fairly poor gun handling compared to its western counterparts in both the gun elevation and traverse speeds, which can get you destroyed or severely damaged in close range engagements.

Some threats to be worried about:

The T-80B is an improved variant of the T-80 main battle tank that debuted in 1978. It received a laser rangefinder, a new fire-control system, and a new autoloader; these modifications allowed the firing of 9M112-1 Kobra anti-tank guided missiles. The ATGMs could be launched at any speed, and they were fired out of the gun barrel. The T-80B also featured new composite armour. In 1980, the T-80B received a new 1,100 hp engine. In 1982 a new gun was fitted, and fittings for ERA were added in 1985. The ERA increased protection against chemical warheads significantly, at an estimated 400 mm of additional chemical protection.

The T-80B was not used in Afghanistan during the 1980s in order to keep it a secret from the Western nations. Its first combat usage was during the First Chechen War. They were used to capture cities, and they often suffered casualties because of how dangerous urban environments are for tanks. Many T-80B tanks were lost during the attack on Grozny, where more than 450 Chechen rebels were killed. Throughout 3 months of combat, 84 T-80 tanks were used. The 133rd Tank Battalion used 53 T-80s and lost 12. The 3rd Tank Battalion used 31 T-80s and lost 6. During that operation, the T-80Bs were crewed with insufficiently trained crews, and the T-80B was not equipped with ERA. The tanks were not prepared for their enemies, some of whom were veterans from the Soviet-Afghan War.

During the war, T-80s fought several tank-to-tank battles. During December of 1994 and January of 1995, Russian T-80 tanks destroyed six rebel tanks. Two T-80s were damaged; one was destroyed by a 125 mm anti-tank round and another was damaged by 3-4 rounds but repaired. One rebel tank was destroyed in August 1995.

During the operation in Grozny, the Russian tank crews had no knowledge of the city's layout. The rebels attacked the tanks with RPGs from cellars and the tops of buildings. The anti-tank attacks were aimed at the weakest points in the armour, and each tank had three to seven RPGs fired at it. A number of tanks exploded with hits to the ammunition in the autoloader. The T-80's performance in these situations prompted General-Lieutenant A. Galkin, the head of the Armored Directorate, to convince the Minister of Defense to never again produce a tank with a gas turbine engine.

After those operations, the T-80 was never again used to capture cities, but instead to support the infantry at long range. It was pointed out that the T-72 performed just as badly in those situations, and additionally the tanks had been deployed without supporting infantry to cover them. The crews were also insufficiently trained. It has been said that these factors influenced the outcome of the operations more than the characteristics of the tank.