Difference between revisions of "T-34-85" 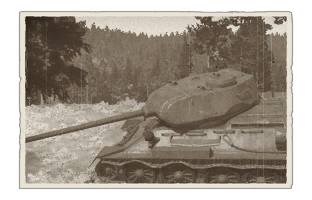 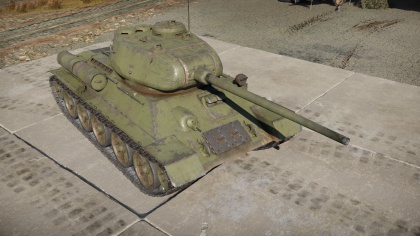 The T-34-85 is a Rank IV Soviet medium tank with a battle rating of 5.7. It was introduced in during the Closed Beta Test for Ground Forces before Update 1.41. Though similar to the T-34-85(D-5T), it has an improved gun and a full crew for combat efficiency.

The T-34-85 is an improvement over its predecessor, the T-34-85(D-5T) with a better armament, ammo, and an additional crew member. Aside from that, the two's technical specification are pretty much the same.

The T-34's slow improvement from the 1941 model was due to the decision to keep changes to the model low to keep costs low and productivity high. This worked well in the first two years against the Germans, but the Battle of Kursk showed that the newer German tanks now outgun the T-34s. Soviet High Command, once conservative on the T-34's upgrades, now opted for an increase in the T-34 armament to be able to counter the German tanks. During the development, an interim solution for the problem was the equipping of the 57 mm ZiS-4M gun onto the T-34, which has better penetration capabilities compared to the 76.2 F-34 gun. This tank, the T-34-57, performed as an adequate "tank-hunter", but the small HE shell on the 57 mm gun made it a poor tank armament so this was only an interim solution until a better design is made.[1]

Testings with various of guns in Soviet inventory against captured German tanks showed that the most capable gun was the 85 mm 52-K anti-aircraft gun. With this discovery, the 52-K underwent development to make derivatives able to be mounted onto a tank. The cannon was able to penetrate the front of the Tiger from 500 meters out, the turret side from 600 meters away, and the hull side from 800 meters away. The 85 mm was first mounted onto the SU-85s, but the need for an upgraded tank had the Soviets find a way to fit the gun in the T-34. The cannon was much larger than the F-34 gun and so a much larger turret was necessary to house the gun. The solution to this was to transfer the turret from the cancelled T-43 tank program onto the T-34, this increased the turret ring diameter from the original 1,425 mm into 1,600 mm, which required a retooling in the manufacturing plants. While this delayed T-34 production, the 85 mm was finally able to be mounted onto the T-34 as the T-34-85.[1]

From its introduction in March 1944 and onwards, the T-34-85s were the main tank in Soviet service.[1] The older T-34s were still being used in the theater as they are lost from combat and retribution and replaced. The T-34-85's 85 mm gun armour penetration and front turret armour nearly doubled compared to the older T-34, yet retain the same speed, mobility, and hull armour. The T-34-85 was vastly superior the German's Panzer IVs and StuG IIIs, and though it was still inferior against the Panther and the Tiger I, it had better chance than the older T-34 models. The T-34-85s maintain numerical superiority throughout the entire war due to the Soviet's industrial base and design concept of mass producing single designs, while the Germans focus on newer, better tanks such as the heavier Tiger II, which restricted productivity and made logistics a hard job to maintain. The T-34-85s were the main Soviet spearhead weapon during Operation Bagration and its future offensives up until the Battle of Berlin. After the fall of Nazi Germany, the Soviets use the T-34-85s again in their invasion of Manchuria to fulfill their promise to invade Japan after the fall of Germany. The combined-arms forces of their armoured units overran the Japanese positions in Manchuria and were pushed all the way to a distance from the Yalu River. The Japanese surrender order was given out by the emperor on August 14, which was not carried out as a cease fire until August 17.

After the end of World War II, the T-34-85s were given out in massive quantities to Soviet occupied territories and their allies. The next action the T-34-85s faced was in the Korean War, in the hands of the North Koreans. The North Korean armoured forces are able to assault deep into South Korea with these tanks as South Koreans were severely under-equipped in anti-tank weaponry, only armed with US-supplied M24 Chaffees and regular bazookas, which were useless against the T-34s. It wasn't until the deployment of US troops into the Korean peninsula that the tide turned against the North Koreans and their tanks. The US sent their M4A3E8 Shermans, M26 Pershings, and "Super Bazookas" to arm the troops there. All these weapons are able to destroy the T-34-85s, with the M26 Pershing being able to penetrate straight through the front and back of the T-34-85 armour with HVAP rounds. The Shermans are nearly equal to the T-34-85s, but the better optic quality and crew training gave them an edge against the T-34-85s. These anti-tank weapons supplied by the coalition caused the North Koreans to suffer major tank losses and after their supply lines were cut by the US landings at Inchon, the armoured vehicles were abandoned as the North Koreans retreated. Pure tank-to-tank battles between the two sides were scarce after 1950 due to a heavy decline in armoured forces in the North Korean side.[1]

Past the Korean War, the T-34-85s were clearly obsolete with development of newer tanks being developed world wide. Despite that, many countries still use T-34-85s as their main tank or as reserves, even the Soviets and Finnish continue using them until the late 1960s. Warsaw Pact countries used them in large quantities and were involved in many conflicts within these countries, such as the East German uprising in June 1953, Hungarian revolution in 1956, Coup by Greek junta in July 1974, and the Turkish invasion in July-August 1974. The T-34-85s also saw conflicts in the Middle East in the hands of Syrians, Egyptians, Jordanians, and Iraq; Vietnam with the North Vietnamese, and in the Bosnian War in the Bosnian Serb Army. African countries such as Somalia and Angola still use T-34-85s in their armies, and they could even be seen in the recent conflicts in Yemen and in Ukraine. Despite their age, it seems that the T-34-85 was to become a tank that will persist in the hands of smaller countries for years to come.

During late 1944, the Soviets were already searching for a successor to the T-34s that use most of the newest tank technology found in recent years. The result was the T-44 medium tank, which did not enter service in time to see widespread usage and even combat during World War II. The T-44 underwent further development and redesigning to become a tank that would surpass the T-34 in the most produced tank in existence, the T-54 tank.