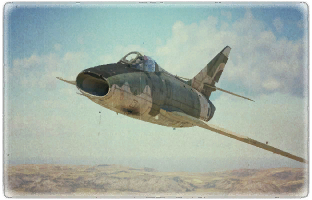 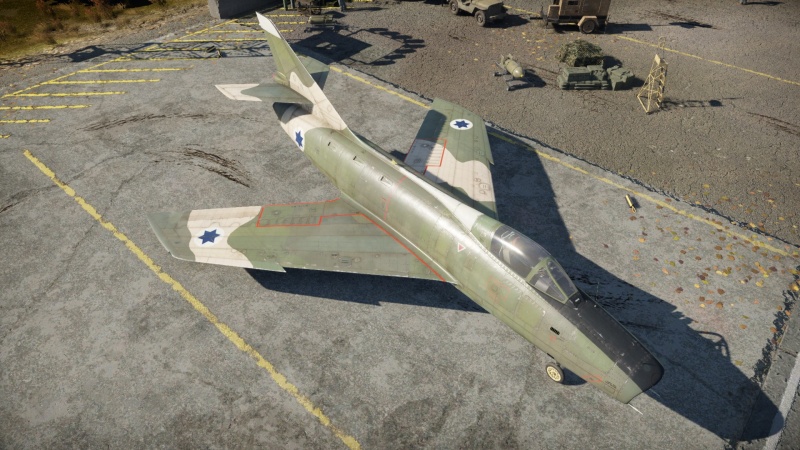 The Super Mystere B2 Sambad is a rank VI Israeli jet fighter with a battle rating of 9.0 (AB/RB/SB). It was introduced in Update "Winged Lions". It is a copy of the Super Mystère B2 found in the French tree, Israel having purchased them in 1958. It was both the Israeli Air Force's first supersonic fighter and afterburning jet.

The Sambad flies in a similar manner to the preceding Mystere IVA, with excellent AOA at low airspeeds, behaving similarly to later delta-winged designs. This allows it to shed off energy and allow pilots to force aircraft that are on their tail to overshoot; however, this can allow the Sambad to be easily trapped in a low energy state, and the poor acceleration will not be able to save the pilot. Unlike the Mystere, the Sambad compresses at higher airspeeds (usually above 900 km/h), restricting it to around 8-10 Gs of pull. This allows the Sambad to maintain energy and maintain higher airspeeds, and pilots are advised to use this to their advantage. This can make up for the lacklustre acceleration at the lower end of performance, allowing pilots to bleed the speed of opposing aircraft whilst keeping their own speed high. The roll rate is average, better than the MiG-17 but below that of the Sabres, and pilots should be able to evade shots easily in most cases. 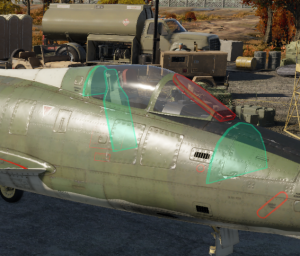 Armour layout of the Israeli Sambad

The Sambad is protected by several layers of steel and bulletproof glass, both in front and behind the pilot. The front windshield is a 40 mm bulletproof glass pane, angled at 61°, this is enough to stop rifle-calibre rounds and massively reduce the velocity of heavy machine guns such as the .50 cal M3 Browning. This will provide partial protection in head-on attacks, however pilots should not rely on this to protect the pilot as concentrated fire will overwhelm it. The pilot is also protected by three 14 mm sheets of armour, two behind and one slightly ahead of the windshield. The fuel tanks are all self-sealing, and take the space directly ahead of the engine and most of the wing between the spars.

As the Sambad is an Air Supremacy fighter, performance and air-to-air missiles should be the pilot's top priority. Compressor should be the first modification chosen, as the acceleration for a non-upgraded plane is subpar for the rank. It is also recommended to research the Matra Type 61 modification, as it is needed to gain access to the Shafrir air-to-air missile at tier IV. Next, it is recommended to research New boosters and the Matra Type 116 rocket modification. The Sambad feels slightly sluggish without boosters and compresses at high speed, boosters help to correct that. At tier III, Wings repair and Engine are next recommended; this will decrease the drag of the wings and increase the engine's thrust, greatly helping performance. Once these two modifications are unlocked, pilots can then research the Shafrir missile, allowing its use against faster or unaware aircraft. At this stage the pilot can then research Cover, G-suit, Airframe, and Fuselage repair. This will grant the full performance of the aircraft, and the pilot can then research the other modifications, namely Offensive 30 mm, New 30 mm cannons, and the 100, 250 and 500 kg bomb modifications.

The Sambad is armed with: 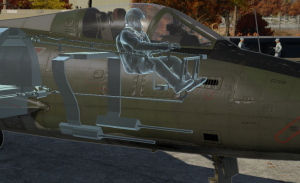 Arrangement of 30 mm DEFAs on Sambad

The Sambad is equipped with 2 x DEFA 552 30 mm cannons mounted on the underside of the nose; 150 rounds per gun giving a trigger time of 7.5 seconds. The DEFAs will be familiar to Israeli pilots, as every rank 6 Israeli jet uses the 30 mm DEFA. The cannons have good fire rate, great damage but a relatively low muzzle velocity at 810 m/s. Pilots should expect to require plenty of lead, but the good damage and great ammo capacity for a cannon will serve well once well practiced.

The Sambad can be outfitted with the following ordnance:

The Sambad is best used as a support fighter, using its high speed energy retention and relatively high top speed for the rank to its advantage. Pilots can use this to attack enemies which are slow or distracted, making slashing attacks and quickly escaping. The use of vertical manoeuvres is also recommended, as the Sambad will maintain a high rate of climb while in the high speed state, allowing the pilot to drain the speed of slower aircraft. if necessary a spiral can also be added to the climb, this is the most effective way to deal with higher ranking Delta-wing designs like the Draken, as they will bleed prodigious amounts of energy while attempting to follow, eventually stalling and allowing the Sambad pilot to drop on the slow opponent. Pilots should note however, that this applies when the Sambad is at high speed, as the energy retention at slower speeds falls off significantly. If the Sambad is caught at a low energy state, it is recommended to force an overshoot, using the excessive energy loss as a benefit. Pilots can then use their cannons, or the Shafrir air-to-air missile to attempt to kill the enemy aircraft as it flies away, and begin to regain speed. It is recommended to avoid this whenever possible, as the plane is best used at high speed. In ground battles, staying low and fast is recommended as the Sambad lacks CCIP, requiring the pilot to close the distance for accurate fire of its bombs and rockets. The Sa'ar which falls behind the Sambad in the tree should be preferred for CAS missions.