The M1A2's armour is a massive improvement in comparison to its predecessor, the M1A1, and is the first Abrams in the game to be equipped with depleted uranium composite armour, located behind the turret cheeks of the tank. The protection afforded with the use of depleted uranium amounts to roughly over 200 mm RHAe more armour against kinetic energy projectiles whilst retaining the near-impenetrable chemical protection of the M1A1. The turret's overall kinetic energy protection ranges from around 690 mm to 600 mm, whilst the chemical energy protection ranges from 1200 mm to 1000 mm. However, the M1A2 has no depleted uranium located in the lower front plate, retaining the same weak spots as the M1A1's hull. The turret ring and breech also are weak spots, though the breech on the Abrams series is notably some of the strongest out of all NATO main battle tanks being small and well protected against chemical energy rounds and some early APFSDS rounds.

The M1A2 Abrams retains the same 1,519 horsepower AGT-1500 gas turbine on previous Abrams variants, though the tank has gained an additional 4 tons of weight, putting the total mass of the tank at 61.7 tonnes. This translates to a noticeable decrease in acceleration and manoeuvrability due to a lower hp/ton ratio. However, the tank retains the same 68 km/h top speed and 40 km/h reverse speed and relative to its counterparts the M1A2 Abrams is still fairly mobile, especially at speeds over 40 km/h. When stock, the hull traverse is quite horrendous and acceleration is lacking, though these are largely remedied by researching the engine, filters, transmission and tracks modules. 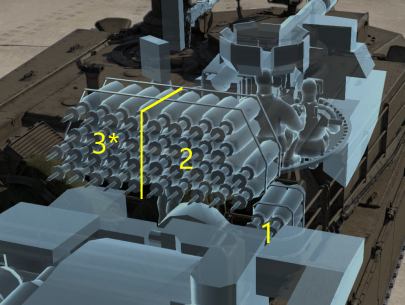