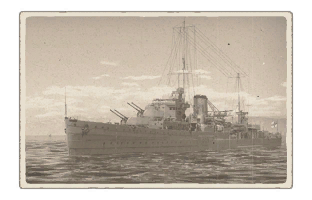 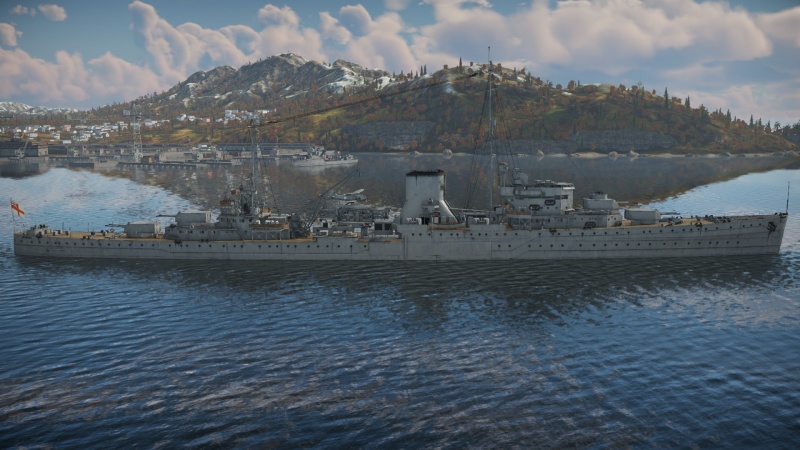 The HMNZS Leander is all-around armour upgrade over HMS Arethusa. This includes thicker belt armour (now 3 in), thicker armour over the magazines (3.5 in), and added anti-fragmentation armour around the bridge area of the superstructure. This added armour increases the already decent survivability against both destroyers and now to some extent cruisers. Captains of the Leander should take advantage of this added armour while knowing that it still cannot take hits from heavy cruisers, doing so will result in the loss of the ship extremely quickly. The overall survivability is increased as the HMNZS Leader boasts a total of 767 crewmen which allows more hits to be taken without suffering a fatal amount of crew loss. When all the additional armour and crew is taken into account, it allows captains of this ship to act much more aggressively than with previous British cruisers.

The HMNZS Leander boasts increased mobility and manoeuvrability over previous British cruisers. Even stock, this ship handles much better than previous ships such as the HMS Enterprise or the HMS Arethusa due to its quick rudder shifting time and faster acceleration. Once spaded, this ship turns into a fast cruiser at a 60 km/h (32 knots) forward and 26 km/h (14 knots) in reverse. This added speed along with a quick rudder shifting time allows for increased tactical flexibility in regards to positioning and manoeuvring the ship.

The cannons of the HMNZS Leader are the same as on the previous ship, except now with another twin turret for a total of 8 guns in 4 turrets. They keep the fast reload of 7.5 seconds (with ace crew) along with their accuracy.

Located amidships is a catapult with one Osprey Mk IV scout plane which provides unique offensive and defensive abilities, expanding tactical options. Ship-launched scout planes fly just like regular tree units but lack munition choices and cockpit views. The Osprey may look familiar as it is a derivative of the Nimrod fighter, but as a 2-seater equipped with a defensive machine gun along with the fixed machine gun and no bombs. It does have the scout plane ability to lay down smoke cover (up to 3 times). Captains will be wise to remember to utilise the aircraft and consider when best to use it, for example to cap a point early or late in the match, to create a smoke screen to stymie enemy bombardment and repair, to attack enemy units directly, or perhaps something completely new!

Note: the aircraft modelled on the ship is not the same as the aircraft that is flown when the scout plane ability is activated.

The Leander is very similar to the Arethusa, its predecessor, but has some upgrades over the former. It carries an extra gun turret, giving it an 8-shell broadside which, combined with the 7.5 secs reload, can give the Leander some dangerous firepower with good accuracy. The good turret traverse and SAP shells make this ship dangerous at close quarters, where it can deal good damage and good penetration to enemy cruisers. It carries the same secondary armament of eight 4-inch guns with four on each broadside, making it a menace for destroyers and larger aircraft. It's also faster than the Arethusa and boasts a larger crew. While the armour is still weak for a cruiser, it's stronger than the Arethusa, with much better protection for the ammo stowage and the gun turrets, as well as some armour for the rudder, which is rare for a light cruiser.

One drawback for the Leander is its weakened AA armament. While it isn't terrible, it's a far cry from the powerful AA screen of the Arethusa, and can leave it vulnerable if it has no friendly ships to offer additional AA fire. The Leander's guns also start to lack at 5.3. Lacking the AP shells of other nations, heavy cruisers can be a real challenge for the Leander, and it struggles to deal good damage at long range as a result. 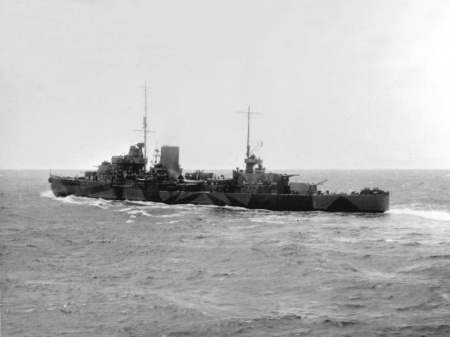 HMNZS / HMS Leander was the lead ship of the eight-ship Leander class, built in the 1930s as a follow-up to the Emerald (E) class. Influenced by the design of the British County-class heavy cruisers, Leander carried a main armament of eight 6-inch guns in dual turrets. Commissioned in 1933, she served under the New Zealand division of the Royal Navy and was eventually given to the New Zealand Navy in 1941, renamed HMNZS Leander. She served in the Indian Ocean and Mediterranean sea during the early days of the Second World War, primarily as a convoy escort. She later served in the Solomon Islands campaign and was hit by a 610 mm torpedo that put her out of service until the end of the war. Following the cessation of hostilities, Leander was repatriated to the UK, and served with the Mediterranean fleet until she was retired in 1948 and scrapped by 1950.

The Leander-class cruisers originated as a successor to the British Emerald (or E) class, as the first class of light cruisers built by the United Kingdom since the end of the First World War. Influenced by the designs of the County and York classes of heavy cruisers, the Leander class had a similar hull design and gun arrangement. However, displacing 7270 tons standard, they were significantly lighter. Leander's powerful steam turbines allowed her to reach a top speed of almost 33 knots (61 km/h), but their large size meant that she had relatively low armour protection compared to her peers - up to 3 inches (76 mm) of armour at the magazines, and far less throughout the vessel.

Leander carried a main armament of eight 6-inch (152 mm) BL Mk 23 guns mounted in four twin turrets, similar to the layout of the County-class heavy cruisers. She also carried a secondary armament of four single 4-inch (102 mm) dual-purpose guns, though these were upgraded to dual turrets later in her career. Her initial anti-aircraft armament was also rather sparse, composed of just three quadruple Vickers machine guns (calibre 12.7 mm); this was also upgraded significantly in her later service. Leander, the first ship of her class, was laid down in February of 1930; following completion, she was commissioned in 1933.

Following her completion, the Leander served in the New Zealand division of the Royal Navy, along with her sister ship Achilles. Back then, the defence of New Zealand's naval territory was conducted by the Royal Navy, and as a result, the ships were operated by the Royal Navy until the formation of the New Zealand navy in 1941. She participated in the Coronation Review of 1937, and later conducted an aerial survey of the south Pacific ocean. During the time before the war, she toured ports in New Zealand, and also participated in exercises in Australian and British waters.

Following the outbreak of the Second World War, Leander travelled to the port of Alexandria, in the Mediterranean. She was intended to serve in the British mediterranean fleet, but these plans were changed when she was instead given to the British East Indies squadron. During this period, she escorted convoys in the Red sea area and sank several vessels, including an Italian submarine and merchant raider.

In early 1941, Leander was formally given to the New Zealand Navy, which had been formed as an independent naval force. She was then reassigned to the Mediterranean squadron to replace several cruisers that had been destroyed. During this time, she participated in the Syria-Lebanon campaign, fighting against the Vichy French naval forces stationed in that area. After this action, Leander departed as an escort for a convoy bound for Australia, arriving in September of 1941.

In early 1942, with the Japanese raid on Pearl harbour and subsequent declaration of war, Leander began serving in the Pacific theatre. She escorted convoys during the Solomons campaign but was dry docked for several months when a crack was found in her hull. She was returned to service in March of 1943, replacing the sunken cruiser Helena in the Solomon campaign. It was there in July of 1943 when, during a short engagement with Japanese naval forces, Helena was hit by a 610 mm "long lance" torpedo. The damage was extreme, yet she survived and limped to port for repairs. In fact, the damage was extensive enough that she was taken out of service for the rest of the war. By late 1944, Leander had been paid off from the New Zealand Navy, most of her crew members going to her sister ship HMNZS Achilles. Following the completion of repairs, she was repatriated to the UK in late 1945. She saw little service, and was used as a target ship in 1948 before being scrapped by 1950.

Initially, five ships of the Leander-class were ordered in the early 1930s, with HMS Leader as the lead ship being laid down in September 1930. Leander was completed a year later and commissioned into service in March 1933. Initially, the warship served with the New Zealand Division of the Royal Navy, before being transferred to the Royal New Zealand Navy after its formation in 1941. From there onwards, the ship sailed under its new designation HMNZS Leander.

Leander primarily served in the Pacific theatre during WW2, taking part in several smaller operations during her early service life. Leander was also briefly stationed in the Mediterranean, supporting allied troops in actions against Vichy France during the Syria-Lebanon campaign. After that, Leander once again returned to the Pacific, where she was severely damaged after an engagement with a small Japanese task force in July 1943. The damage suffered from a torpedo hit was so severe that it rendered Leander inoperable for the remainder of the war, until she was repaired in August 1945.

HMNZS Leander only had a very short post-war service life. The warship was officially decommissioned in 1948 and sold for scrap in 1950.