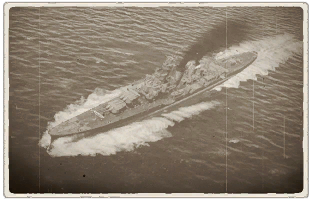 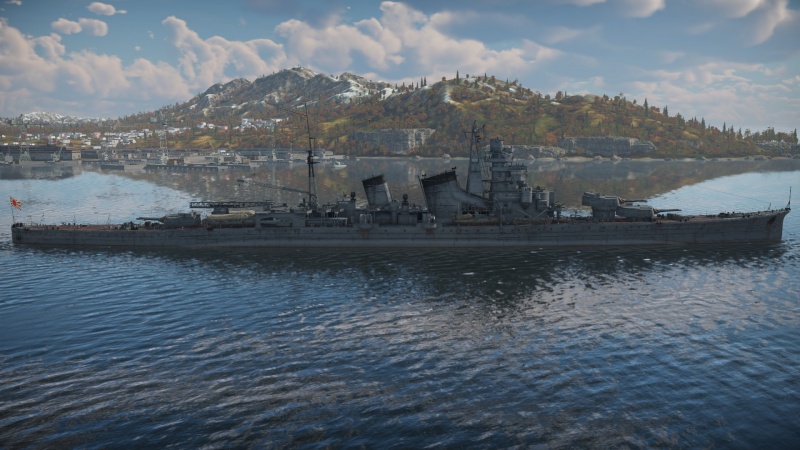 The Aoba-class, IJN Aoba, 1945 is a rank IV Japanese heavy cruiser with a battle rating of 5.7 (AB/RB/SB). It was introduced in Update "Direct Hit".

While originally part of the Furutaka class of heavy cruisers first laid down in 1922, the development of new guns and turrets prompted the modification of Aoba and her sister ship Kinugasa in 1924, placing them into their own class with Aoba being the lead ship. Aoba shares her armour and main armament with Furutaka while having vastly improved anti-aircraft capability and can be played in a similar manner.

Aoba is lightly armoured. The belt armour is only 76.2 mm of rolled homogeneous armour (RHA) and does not extend towards the front and rear turrets to offer additional protection for the magazines; most other heavy cruisers and some light cruisers have thicker armour. Fortunately, the ammunition magazines for the main guns are below the water line and the top is covered by 32 mm of RHA. The fuel tanks in the centre are protected by the belt armour, but the thin steel means these can be easily set on fire which can then spread to the engines. Additional fuel tanks in the bow and stern are completely unprotected and since they are located quite close to the ammunition, the fire can spread to the ammunition. The turrets are large and easy to hit, with only 25mm of RHA. HE from destroyer calibre guns have no issue disabling the turrets.

With only 657 crew, Aoba has the second fewest number of sailors for a heavy cruiser after IJN Kako. This leaves her vulnerable to complete crew loss in a few minutes if concentrated upon by multiple ships.

Although other cruisers can easily put Aoba out of commission, destroyers will have a hard time dealing any significant damage outside of disabling turrets and starting fires.

Aoba has 6 x 20.3 cm/50 3rd year type No.2 guns split into 3 turrets with 2 guns each. 2 turrets are forward and a single aft of the superstructure. The forward turrets are superfiring, meaning the one behind can shoot over the one in front. She can use HE, HE-TF, and AP shells. The turrets have a slow rotation speed but great firing angles. The guns have a reload time of 12 seconds with the top crew skills, putting them on par with the German Admiral Hipper-class and British County-class heavy cruisers.

HE-TF should be avoided since the slow turret rotation speed and low rate of fire makes this shell basically useless against air targets, and it is not effective against surface targets unlike HE-VT. However, the AP has the best HE filler of all the 20.3 cm (8 inch) armed cruisers and is shared with the much larger and more powerful heavy cruisers in the Japanese fleet, Mogami and Tone. The great HE filler deals significant damage to cruisers and has an increased chance of detonating the ammunition storages of enemy ships.

Aoba comes equipped with 4 turrets with a single 120 mm gun each. These guns are dual purpose, able to use HE-TF against aircraft. Since there are only 4 guns however, it is unlikely these will deter any oncoming aircraft. With very thin armour, and limited numbers, these guns are not all that useful.

Aoba sees a great improvement over Furutaka in the anti-air department, going from just 4 x dual mount 25 mm auto cannons and 2 x 13.2 mm machine guns, to 15 x single mount, 10 x double mount, and 5 x triple mount 25 mm cannons (a total of 50 cannons overall). The 25 mm auto cannons can shoot down fighters and small attackers with ease, although some heavier aircraft such as bombers can shrug off enough of the fire to get close enough to drop bombs or torpedoes.

The Type 93 torpedoes can be found on Aoba. Also nicknamed the "Long Lance", these are arguably the best family of torpedoes in the game. The ones carried by Aoba are the longer range versions. With a top speed of 93 km/h (50 knots), range of 20 km, and explosive TNT equivalent of over 600 kg, these torpedoes have the power to destroy even battleships with a single salvo.

The decent turret firing angles allow the Aoba to sail bow front, maximizing the protective capabilities of the relatively thin armour. The AP shells have decent HE filler and deal good damage against all but the most heavily armoured ships. The Type 93 torpedoes can be launched from the spawn and can hit targets from extreme ranges, although the probability of a successful torpedo hit at these ranges is low due to many factors such as the low speed making them easier to dodge. Alternatively the torpedoes can be used at closer ranges where they will be much more difficult to dodge.

In 1922, the Furutaka-class cruisers (known as A class in the Japanese navy) were first laid down. Designed to compete with the American Omaha class and British Hawkins class, the Furutaka class were just as fast, had a heavier broadside and had more powerful torpedoes. In 1924, it was decided to use the newly developed 2 x 20 cm gun turrets on the ships. However, it was too late to retrofit Furutaka and Kako, therefore the remaining two ships, Aoba and Kinugasa, would be retrofitted with the new armament and placed in a separate class. The machinery and armour remained the same. Aoba received a gunpowder-powered aircraft catapult in 1929. In 1930, the navy won approval for the modernization of the A-class cruisers to counter the numerical advantage enjoyed by the US Navy. However, the political situation limited the modernization given. Modifications started in 1938 and included new 20.3 cm/50 main guns, 4 x dual 25 mm AA guns around the funnel, and mounting of new torpedo launchers with the Type 93 torpedoes. The total increase in weight meant Aoba had needed bulges added to the hull to restore stability.

Aoba was completed in 1927 and assigned to Cruiser Division (CruDiv) 5, then CruDiv6 in 1933, and then CruDiv7. In the late 1920s to 1930s, Aoba was frequently used to patrol the China coast. After her 1938-40 modifications were completed, she was returned to CruDiv6. In 1941, during the attack on Pearl Harbour, Aoba and the other cruisers of CruDiv6 engaged in the invasion of Guam, and she then participated in the second invasion of Wake Island.

In the Battle of Coral Sea, 1942, Aoba and CruDiv6 rendezvous at sea with light carrier Shoho. Dive and torpedo bombers from USS Yorktown and Lexington sunk Shoho on May 7th at 1100 hours. The next day, Aoba covered the withdrawal of the Port Moresby invasion convoy. On May 22nd, Aoba returned to Kure Naval Arsenal for repairs and was then sent to Santa Isabel Island for patrols before being assigned to the recently created Eighth Fleet on July 14th and was assigned to patrols around New Britain, New Ireland, and the Solomon Islands.

On August 7th 1942, an E13 spotter plane from Aoba found "one battleship, one auxiliary carrier, four cruisers, seven destroyers and 15 transports" off Teluga Point. In the Battle of Savo Island, Aoba accompanied CruDiv6, Takao-class cruiser Chokai, light cruisers Tenryuu and Yubari, and destroyer Yunagi, and engaged the Allied fleet at night, sinking cruisers USS Astoria, Quincy, Vincennes and HMAS Canberra and damaging the cruiser USS Chicago and destroyers Ralph Talbot and Patterson. Aoba was hit once during the battle while her sister ship Kinugasa was hit twice with Chokai being hit 3 times. Aoba then provided cover for the Japanese reinforcements heading for Guadalcanal.

In the Battle of Cape Esperance on October 11th 1942, CruDiv6 departed with destroyers Fubuki and Hatsuyuki to cover reinforcement troops by shelling Henderson Field. They were spotted by 2 American OS2U Kingfishers and at 2235 the fleet was spotted by radar from USS Helena. Both sides opened fire, however Admiral Goto who was in command of CruDiv6 believed they were under friendly fire and ordered his ships to turn, thus exposing the broadsides of the fleet. Furutaka was sunk and Aoba suffered severe damage, No.2 turret was knocked out and No.3 turret was destroyed. 4 of Aoba's boilers were inoperable. Admiral Goto was mortally wounded and 80 crewmen were killed. After temporary repairs at Shortland, Aoba sailed to Truk on October 15th where Admiral Isoroku Yamamoto inspected the damage before sending her back to Japan.

After returning to Kure, Aoba was repaired. The destroyed No.3 turret was replaced with a triple mount 25 mm AA gun and sent back to Truk on February 24th 1943. On April 3rd, Aoba was bombed by B-17 Flying Fortresses while moored at Kavieng. Two of Aoba's Type 93 torpedoes exploded and started a fire while she was strafed by machine gun fire from the B-17s. She was beached to prevent her from sinking. Aoba was then towed to Truk and then back to Kure where she was repaired and refitted. No.3 turret was returned, a Type 21 air-search radar was installed and 2 twin mount 25 mm AA guns were added. Irreparable engine damage limited Aoba's top speed to just 46 km/h (25 knots).

Aoba was then sent to Singapore as part of the First Southern Expeditionary Fleet on December 24th 1943. She was based outside of Singapore and escorted convoys to Burma and the Andaman Islands. On February 25th 1944, Aoba returned to CruDiv6 where she participated in the Indian Ocean raid in March and then resumed escort duties through the Dutch East Indies and New Guinea. In July, Aoba was refitted again in Singapore with the Type 22 air-search radar and gained an additional 4 triple mount 25 mm AA guns and 15 single mount 25 mm AA guns.

On October 11th, Aoba received minor damage after an accidental collision with cruiser Kinu. However, US submarine Bream attacked Aoba on October 23rd. 1 of 6 torpedoes struck Aoba in the No.2 engine room, she then sailed to Cavite Naval Yard near Manila for emergency repairs. While undergoing repairs, on October 29th Aoba was bombed by planes from Task Force 38. Aoba was then assigned to a convoy and sent back to Japan again despite incomplete repairs. While heading for Japan, the convoy was attacked by US submarines Guitarro, Bream, Raton and Ray off Luzon on November 6th. 23 torpedoes were launched by the submarines, 2 hit cruiser Kumano but Aoba escaped with no further damage. Upon arrival at Kure, Aoba was declared irreparable and re-rated into a reserve ship.

A US air raid on Kure on April 24th 1945 damaged Aoba further, causing her to sink and settle at the bottom of the shallow harbour. She was not repaired, instead additional 25 mm AA guns were fitted and she was turned into a floating AA battery with a total of 50 x 25 mm guns, 5 triple, 10 double and 15 single mounts. On July 14th, Kure was attacked again, this time by planes from Task Force 38. Aoba was bombed once again where she settled at the bottom at 2200 hours. 4 days later, the wreck of Aoba was bombed again by Task Force 38, 4 bomb hits set her on fire and B-24 Liberators hit her again with 4 bombs, breaking off her stern.

Aoba was formally removed from the Navy list in November 15th 1945 and her wreckage was scrapped in 1946-47.