Difference between revisions of "Waffentrager" 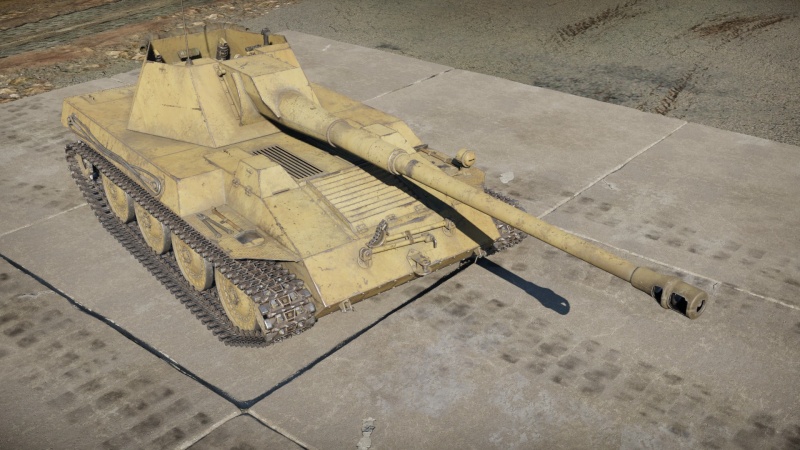 The Waffenträger Krupp-Steyr mit Pak 43 is a rank IV German tank destroyer with a battle rating of 5.7 (AB/RB/SB). It was introduced in Update 1.71 "New E.R.A.". Waffenträger translates to "weapon carrier" in English.

After the Parts and FPE modifications, the most useful upgrades are the Horizontal Drive, Adjustment of Fire, and Mobility modules.

Despite its fully-traversable turret, the Waffenträger is a classic tank destroyer. It has a potent gun, which can defeat almost any heavy tank at this tier, even at long ranges. The shells have great penetration, great explosive filler, and above-average velocity for the tier. The vehicle even has a better-than-average reload speed. (Note: keep in mind that the Waffenträger is not equipped with any machine guns.)

However, this vehicle also has poor mobility. It's just slow (both forwards and reverse), especially when stock and acceleration are poor. The tank struggles on slopes and is completely unsuited for close-up brawling. Another downside to this vehicle is its poor armour setup. Although the armour protection can defend against machine-gun fire, any cannon shell will penetrate with ease. High explosive shells may also overpressure the vehicle. And finally, the open-top turret compartment is vulnerable to aircraft and artillery fire. Therefore, it may be necessary to work with SPAA teammates and find cover under trees or behind buildings.

In addition to the poor mobility, the Waffenträger suffers a lack of gun depression when the cannon is pivoted above the radio operator's or driver's hatch, so careful hull placement is required when engaging targets below your slope level. The Waffenträger also suffers a reduced reload rate due to its cramped turret, making the act of reloading the breech with the large shells difficult and awkward.

Given the vehicle's advantages and disadvantages, a good way to play this vehicle is often in a sniping play-style. Staying hidden, keeping distance, and only exposing the vehicle to shoot capitalizes on the strength of the vehicle's gun while minimizing the effects of its weak armour. Additionally, it is effortless to hide this vehicle behind cover in a hull-down position since it has a low profile and good gun depression.

Alternatively, it may also be beneficial to employ a more ambush-based playstyle with this vehicle. But since this requires more close-up engagements, be careful to avoid lengthy brawls, where the Waffenträger's poor armour and mobility will hinder it greatly. Positioning is still critical. Finally, it may be sometimes possible to engage the enemy while orienting the vehicle sideways or backwards. This protects the engine and transmission from enemy fire and prevents the protruding frontal optics ports from interfering with gun traverse and depression.

In as early as 1942, the German Wehrmacht was looking for a way to make large anti-tank guns easier to deploy and transport and fire the gun and fight on the front lines. Four major German companies (Krupp, Rheinmetall, Borsig, and Ardelt) took part in a tender of the Waffenamt (German Army Weapons Agency) in 1943 for the project. Then, in April 1944, the four companies presented their prototypes. With Krupp and Steyr working together on a design, and Rheinmetall and Borsig on their own. Both designs envisaged placing the 8.8 cm PaK 43 L / 71 in a lightly armoured, upwardly open, rotatable tower mounted on a hull of a Raupenschlepper Ost (a tracked artillery mover) to keep costs down and reduce complexity. However, the decision was made for the prototype of the last company, Ardelt, therefore making the Krupp-Steyr design unwanted by the Waffenamt.