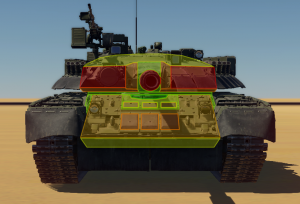 The armour protection of the T-80U is exceptional, especially if the incoming round hits one of the Kontakt-5 ERA plates. The strongest parts of the tank are the turret front and a majority of the upper front plate. It does, however, have some weaker areas, the most important being the driver's hatch, the immediate areas of the turret surrounding the gun and its breach, and its lower frontal plate. These weak spots are however pretty small targets at range, and thus by hiding them properly, the risk of being hit can be minimized. Owing to its very low profile, a hull-down T-80U is a small target in itself; the weaker parts of its armour are even smaller.

Fuel tanks on either side of the driver can soak up some shrapnel and add to the overall survivability. However, as with all Russian auto-loaded MBTs, there are only three crew members so a well-placed shot is capable of causing a crew knock-out. It's also worth noting that the placement of the ammo rack, below the turret in a carousel-style setup, leaves the T-80U particularly vulnerable to side shots causing ammunition detonation. The protection of the T-80U is very similar to the T-64B in terms of the size and placement of the weak areas. The sides of your tank should always be protected, and when engaging an enemy, your front armour should always be aligned directly towards him to reduce the risks of a shot penetrating your weaker side. The tank does, however, have some Kontakt-5 ERA on its upper front skirts, meaning that you have some extra protection against kinetic penetrators, and a lot against chemical shells, until the ERA bricks are detonated (leaving the area vulnerable for another hit). 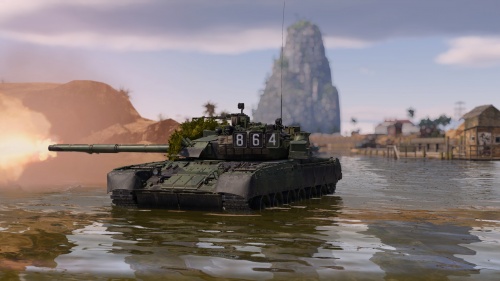