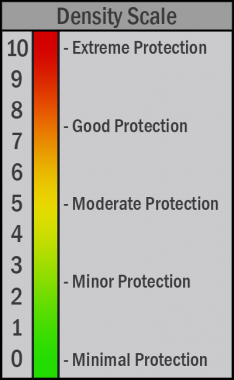 The War Thunder in-game armour viewer offers an accurate, easy-to-use visual of the armour density of vehicles, allowing players to preview any vehicle and easily tell where both the vehicle's strong and weak points are. However, from approximately Battle Rating 9.0 and above, vehicles begin to integrate composite protection, and often the armour viewer won't represent these additional and significant composite armour values.

An additional approach in dealing with composite and add-on armour

To compensate for this and to further improve the quality of the information available on the War Thunder Wiki, this information can be displayed in the form of a 'protection density visualisation' - a manually generated image which allows players to view the distribution of this composite armour upon the vehicle. This image makes use of colour or numerical spectrum to represent the density (or protection level) of armour in a given area of a vehicle. The closer to the colour green which is displayed the weaker the armour is and the closer to the colour red, the more difficult it will be to make a damaging or disabling shot. All values are measured relative to an average top-tier kinetic round (approximately 480 mm, the improved round for most tanks - 3BM42, L26, DM33), excluding outliers like the Leclerc and Ariete PSO.

This proves particularly valuable for late Rank VI and most Rank VII vehicles, allowing for easy visualisation of weak spots on vehicles, as well as the ability to directly compare protection between vehicles. One example of this is the Challenger 2 has turret cheek armour which can be considered an 8 or 9 on the scale, which would be displayed in a deep orange or red (the most difficult to penetrate), while the best armour on the Type 90 would be considered 5 or 6 on the scale at best and its strongest points would be displayed as a light orange or yellow only. As such, the vehicles can be compared directly with ease.

Below are two examples for comparison; the Type 90 MBT (known for speed and firepower, however only offering mediocre protection) and the Challenger 2 (known for upper hull and turret protection). By comparing these two images, we can see that the Challenger 2 offers significantly improved overall protection than the Type 90. Comparisons like this can be used to determine if a vehicle can rely on armour, and if so, what circumstances it will be reliable in.

Sections such as the main cheeks of the Challenger 2 are marked red, as there is absolutely no chance of an average kinetic or chemical round penetrating them under any circumstances. There may be exceptional rounds which may be able to, such as the high-penetration rounds of the ADATS or the Ariete PSO (in absolutely perfect circumstances, the PSO's best kinetic round is capable of penetrating the Challenger 2's turret cheeks - but only from a particular angle).

Sections such as the Challenger's Upper Front Plate (UFP) are relatively well-protected, however, under certain circumstances (favourable angling, usually) it might be penetrated by an average round. However, the lower section of the lower front plate and the cannon surround panels will be easily penetrated, and will only provide adequate protection in exceptional cases. The cannon itself is marked in dark red as any shots that hit it will be absorbed.

Meanwhile, the Type 90 offers much less in terms of protection. Its UFP and turret cheeks will only protect against normal rounds under exceptional circumstances and otherwise will usually provide minimal protection. The cannon does provide protection as with most vehicles, however, the vehicle's composite armour is easily visualised as something that cannot be relied on.