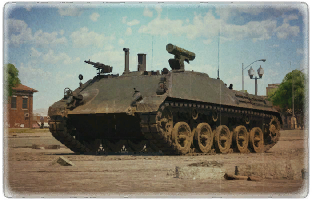 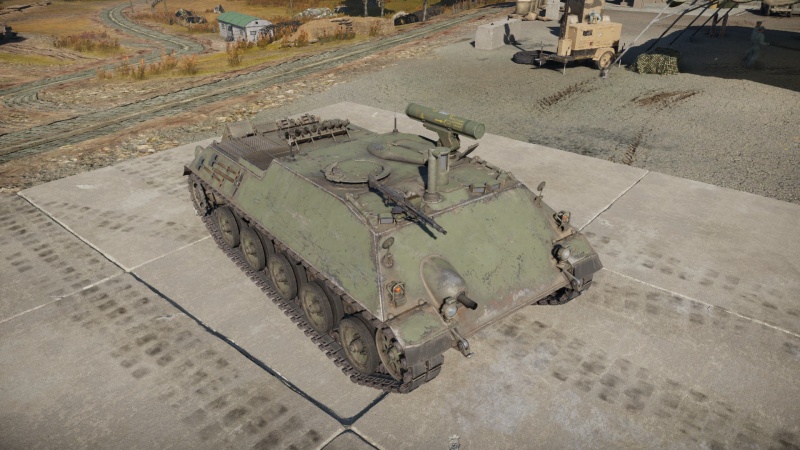 The Raketenjagdpanzer 2 (HOT) is a rank VI German tank destroyer with a battle rating of 8.0 (AB/RB/SB). It was introduced in Update 1.63 "Desert Hunters". Compared to its predecessor, this variant has an upgraded missile known as the HOT (High Subsonic Optical Remote-Guided, Tube-Launched) that is aimed by simply sticking the gun's sight onto the desired target.

Due to its relatively low profile, the Raketenjagdpanzer 2 HOT is able to completely conceal itself behind hills and rocks and fire over them. This allows for quick hit and run strikes, and ambushes are made much easier. According to several commanders, the reverse rate of this vehicle is outstanding, allowing retreat if needed. The ATGM itself is rather glitchy in long-range flight but is outstanding in mid to close range engagements. However, it cannot fire directly in front of it, nor does the ATGM perform well in vertical manoeuvring.

HOT-K3S ATGM
Autoloader
Automatically feeds projectiles into the breech. The speed does not depend on the skills of the loader
Ammunition20 rounds
Reload10.0 s
Vertical guidance-5° / 10°
Horizontal guidance-15° / 15°
Flight speed240 m/s
Range6 500 m
Method of aiming
ABSemi-auto
RB and SBSemi-auto
Fire on the moveup to 5 km/h
Main article: HOT-K3S

Ammo racks of the RakJPz 2 (HOT)

The RakJPz 2 (HOT) is a very deadly vehicle if played correctly. The vehicle is extremely lightly armored and has to be mainly played in defensive positions. The location of the launcher and sight give it the ability to hide the hull of the vehicle and only expose the launcher keeping you protected while still being able to destroy oncoming enemies.

In the 1960s, development of a missile carrier acting as a tank destroyer. The result came in 1961 with the Raketenjagdpanzer 1, which features the French SS.11 anti-tank missile. The Raketenjagdpanzer 1 features two mounts for the missiles, but only one is available at a time as while one remains ready to fire, the other is reloading inside the vehicle. The vehicle can hold 10 missiles inside on a Hispano-Suiza HS-30 chassis. The vehicle carried lots of problems with the HS-30 chassis so only a limited amount was made at only 95 vehicles produced from 1961 to 1962. A second version was produced alongside the Jagdpanzer 4-5 between 1963 and 1965, and the two were designed on the same chassis. The finished model was designated the Raketenjagdpanzer 2 and this was accepted into service in 1967 for the German Bundeswehr. The Raketenjagdpanzer 2 was produced from 1967 to 1968 with a total of 318 units produced.

Though slightly larger than the Raketenjagdpanzer 1, the Raketenjagdpanzer 2 had better automotive performances with a newer chassis and using a 500 hp diesel engine and a torsion bar suspension. The new vehicle chassis design allowed for increased missile storage for 14 SS.11 missiles. The Raketenjagdpanzer 2 features two rails for the missiles, both ready to fire and reloads are done automatically by each mount inside the vehicle. The SS.11 missiles allow the vehicle to engage enemy armour up to 3 kilometres away, with the missiles strong enough to take out most Soviet armour at the time. MG3 machine guns were added onto the vehicle for anti-infantry and anti-aircraft defence purposes.