The M1A1 is not a brawler. It has impressive acceleration and gun handling, giving it an edge over other vehicles, but anytime it faces the soviets, most times the rounds will not pen. The Hull armor gives the M1A1 a fighting chance against HEAT rounds,even though mot times it will hit the UGP and bounce righthe player and the reload rate is comparable to it's adversaries. . 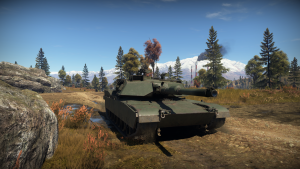