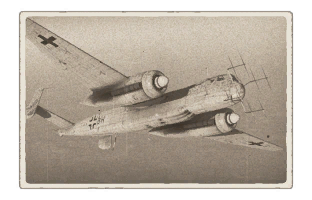 The He 219 A-7 is a premium rank IV German heavy fighter with a battle rating of 4.7 (AB) and 4.3 (RB/SB). It was introduced in Update 1.59 "Flaming Arrows". The He 219 A-7 is unique as it is the first user-created vehicle to be featured in the game as part of the revenue share program, created by Daniil "Joy_Division__" Zaitsev, inspired by "NovA29R". The plane texture was created by Arthur Pacifica Carley. The He 219 A-7, is a premium plane, which is purchasable in-game, located in the German tech tree, for 2,670 golden eagles with a percentage of the sale going back to the model author who created it under the "Revenue Share Program".

The Heinkel He 219 A-7 Uhu was produced by the legendary Heinkel company, which was renowned for making excellent aircraft. He 219 A-7 Uhu, is a powerful German Night Fighter, with less than 300 aircraft created during the war. It has a very distinct external appearance, the design of the aircraft resembles a "Tasman beaked whale". He-219-A7 features a pressurised cockpit, one pilot and one radar operator; who operates the plane. The plane offers a powerful twin "Daimler-Benz DB 603 E" engines. Each engine offers up to 1,774 metric horsepower with a top speed of 388 mph with WEP. The plane is able to climb up to altitudes of 8000 meters (26,248 feet) within 18 minutes and 22 seconds without using WEP.

The unique ground-pounding capability of this aircraft makes it a true force to be reckoned with, if left alone. The "Armored targets" belt for the Mk 103s, consisting of only HVAP-T bullets, is easily able to kill medium tanks from the sides and rear. While the Mk 108s or MG 151s can be left to deal with AAA or Artillery targets, or any fighters that dare to take it head-on.

Climb to a high altitude, make sure the enemy aircraft is below you, descend and stay on their tail. Since most of your cannons are mounted in the fuselage you don't need to set convergence. However you will still have to set it, since your two Mk 108 30 mm cannons are mounted in the wings, set it for 600 metres. Since this will allow them to help with main fuselage cannons to cause critical damage and/or to destroy the enemy plane.

Use WEP and fire two to three second bursts; this will bring the bomber down. Once the bomber is down, ascend and find your next prey. For tougher bombers such as the B-25 Mitchell, you will need to fire a longer burst if aiming for the fuselage, this should be about five seconds. However, you could always aim for the engines and wings and fire a much shorter bust of about two seconds, this will cause major damage to the engine, wing spar, flaps and ailerons, often causing the target aircraft to catch alight and/or lose control and crash which will award you with a kill.

Fighters, interceptors & anything else which is not a bomber.
As long as you stay on its tail and are undetected, a fighter aircraft will be a easy kill.

You should really watch out for the following planes, these are able to outperform and eliminate you from the battle: P-61 Black Widow, Yak 9UT including all the Yak's, the P-51 Mustang, includes all American fighters and British Spitfires.