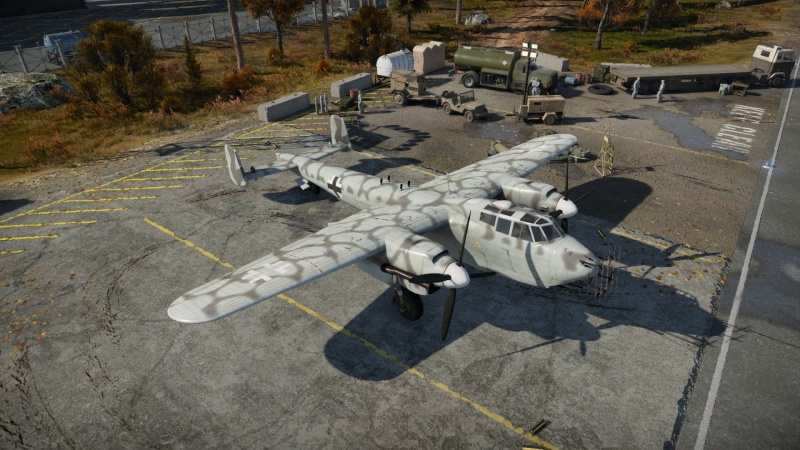 The Do 217 N-2 plays similar to most other heavy fighters, in that it is reliant on delivering a quick knock out punch to an enemy to be effective. However, the aircraft has two unusual traits, which make for different play styles than other heavy fighters. The first is the lack of any form of turret weaponry. This makes the N-2 a unique member in the German heavy fighter line, as virtually all other heavy fighters either have a tail gunner or are agile enough to not need one. The second feature is the inclusion of a set of vertical firing cannons, known as Schräge Musik. This weapon package brings a unique benefit to the table. As most bombers lack the ability to fire their turrets directly under themselves, you can fire away with near-complete immunity to retaliation from enemy gunners.

However, the N-2 is undeniably slow and has crushingly poor manoeuvring. This makes the lack of any form of turret defence all the more noticeable. Caution must be taken to avoid more nimble enemies when possible, as you will be greatly outclassed otherwise.

While the aircraft as a whole seems heavily dependent on lumbering up to a high altitude, and then slowly hunting down bombers, there does exist a fun, if unconventional, alternative. The alternative approach is to go about strafing ground targets, while flying upside down. The main reason for upside down strafing is the Schräge Musik. By flying inverted, you can strafe a large number of ground units in a single pass, while remaining fairly high above the trees. This combines well with the fact that the vertical and forward cannons use the same ammo belts. This tactic can even be put to use around airfields, putting a quick end to anyone on the ground. The only thing to remember when doing this is to always keep a close eye on your altitude. Flying upside down will cause you to fall fairly quickly, so do remember to roll back to right side up in time to avoid crashing. Results are not guaranteed.