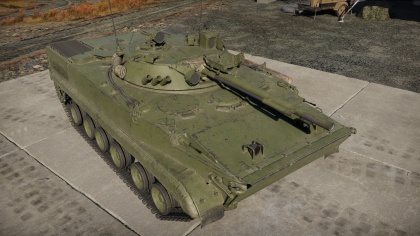 The BMP-3 is an Infantry Fighting Vehicle (IFV), and has comparable armor to other IFVs. It uses special alloys in its construction, which are not equivalent to Rolled Homogeneous Armor (RHA, this is the type of armor that ammunition displays penetration against on stat cards). The front of the BMP-3 has about 50 mm of armor with an additional fuel tank behind this armor. This protects it against any machine gun and some small cannon rounds such as 20 mm, but it will be penetrated by any IFV auto cannon that it might face. The front turret armor has similar levels of protection. The side armor is even worse, at only about 20 mm RHA effectiveness, it will be penetrated by .50 caliber ammunition.

The survivability on the BMP-3 is very low. It has only 3 crew members who are closely spaced together. This means that most penetrating rounds will destroy the BMP-3 in one shot. Additionally, the BMP-3 is subject to the hull-break mechanic, so it will often be destroyed instantly when any component is hit by a large round. There are some empty spaces in the BMP-3 like the fuel tank in the front or the area in the back above the engine (where infantry would sit), but these would only be hit when directly side on with an enemy. This means that if you are going to be shot, it is best to be side on, trying to bait the enemy to hit one of these areas.

When stock the BMP-3 will face many challenges. Many of the strongest tools the BMP-3 has available are locked behind modifications. Most importantly, the Thermal sight and APDS 30mm ammunition belt. Stock BMP-3 commanders have two options available to them: Stay in the back line and use the ATGM or try and brawl up close with the 30mm. Unfortunateley, the 30mm only has 65mm of penetration when stock, so up close brawling is not the ideal strategy. Additionally, the ATGM reload is rather slow. These will be a challenge to overcome when spading this vehicle.

When spaded the BMP-3 has access to a variety of powerful tools. The tandem warhead ATGM has excellent speed and penetration, although it still has a slow reload. The tandem warhead can easily penetrate even vehicles protected by ERA bricks. The APDS belts on the 30mm can easily penetrate the sides of most western MBTs. Additionally, the BMP-3 has access to commander and gunner thermals in high resolution, an advantage few 8.7 tanks have. The thermals can even see through the ESS that the BMP-3 can lay down, so this may be used against vehicles without thermals. Despite these advantages, BMP-3 commanders should play carefully, as the ATGM reload still means that engaging more than one target at once will likely end in a quick trip back to the hangar. This is not helped by the fact that the BMP-3 has little in terms of armor and survivability. The two strategies that will be most effective for the BMP-3 are to either try and flank enemies and take them on one by one up close, or use the thermal binocular and tandem warhead ATGM to engage at longer ranges. However long range engagements will not result in many kills, because enemies may have a chance to move to cover before the ATGM has reloaded.